After being at loggerheads with Karan Johar for quite some time, Kangana Ranaut has finally spoken in his favour by praising his recent production Shershaah.

After being at loggerheads with filmmaker Karan Johar for quite some time, actress Kangana Ranaut has finally spoken in his favour by praising his recent production Shershaah. She took to her Instagram stories section to pen a note for the late Captain Vikram Batra on whose life the film is based and ended it by praising actor Sidharth Malhotra who played the titular character and his entire team for excelling at their job. The film is produced by Johar’s Dharma Productions and Kaash Entertainment.

Sharing Captain Batra’s photo, Kangana wrote, “National hero Vikram Batra was a Himachali boy from Palampur, very popular and loved soldier. When the tragedy happened, news spread like wildfire in Himachal, it slit through our hearts. As a kid, I remember being tormented for days.” 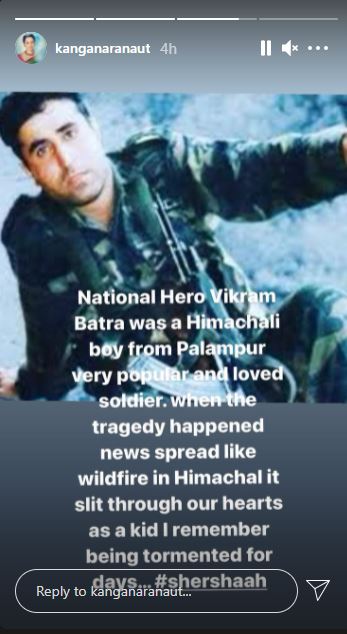 In her second post, she shared Sidharth’s photo from the film and wrote, “What a glorious tribute @sidmalhotra. Congratulations to entire team. It was a big responsibility and you all excelled.” Last year, after the death of actor Sushant Singh Rajput, the debate on nepotism in the film industry had come to the forefront. Kangana had made several remarks on Karan and accused him of promoting nepotism in the industry. It is interesting to see how the filmmaker responds to these positive words.

Meanwhile, on the professional front, Kangana has three films in the pipeline- Thalaivii, Dhaakad and Tejas. She is also producing the web series Tiku Weds Sheru under her production house Manikarnika Films.