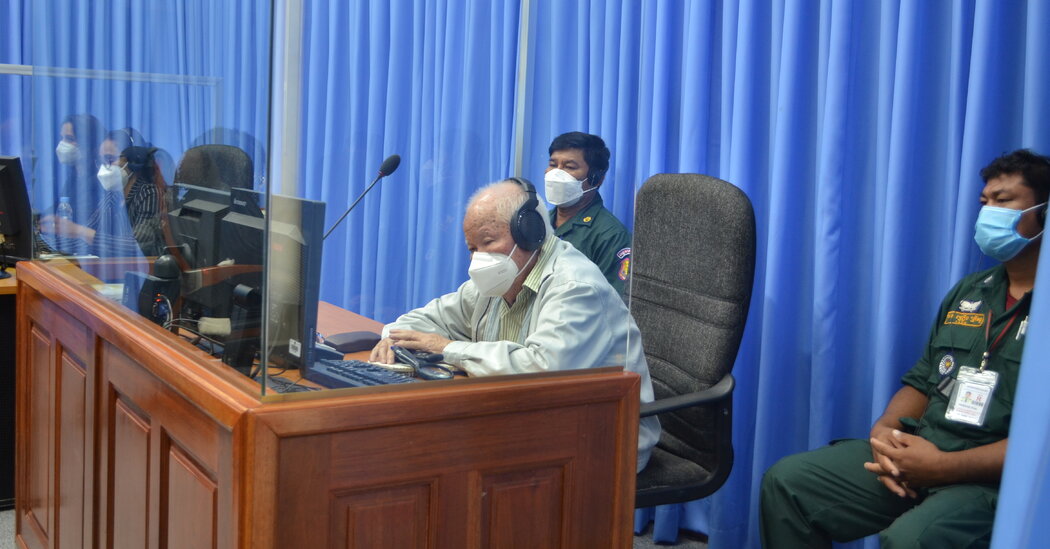 The last living leader of the Khmer Rouge, the brutal Cambodian regime responsible for the deaths of at least 1.7 million people in the late 1970s, was in court Monday to appeal his conviction and life sentence for genocide and other crimes in what is seen as the final stage of the long-running and expensive tribunal centered on the atrocities.

The defendant, Khieu Samphan, 90, was the head of state for the fanatical communist regime that ravaged the country through campaigns of torture, execution, forced labor and starvation. His lawyer, Kong Sam Ong, opened the appeal arguing that the conviction should be dismissed on procedural and evidentiary grounds.

Mr. Khieu Samphan was scheduled to speak on Thursday. He was convicted in November 2018 of genocide against ethnic Vietnamese as well as crimes against humanity and grave breaches of the Geneva Conventions. At that trial, he claimed he had not known of the widespread killings that had taken place on his watch. “The term murderer I categorically reject,” he said.

In Monday’s hearing, prosecutors dismissed his claim that he “knew nothing, saw nothing and heard nothing” over nearly four years at the helm of the movement.

“He’s got the strongest case for saying he didn’t actually do anything,” said David Chandler, a prominent historian of Cambodia and the Khmer Rouge.

“He wasn’t allowed to do anything,” he said. “He was a puppet. They used him as a civilized front, and he was very good at that. He spoke good French, he was intelligent and he had a human face. He was not a thug.”

“But they didn’t keep things from him,” Mr. Chandler added. “He knew exactly what was going on.”

The slow-moving tribunal is scheduled to deliver its judgment on the appeal late next year. Before that, it is scheduled to announce its rulings later this year on the cases of two lower-ranking figures who have argued that they should not be brought to trial. (Those cases were not scheduled to be argued in court.)

“For all intents and purposes, the E.C.C.C. is over,” said Peter Maguire, a scholar of international law, referring to the tribunal by the initials of its formal name, the Extraordinary Chambers in the Courts of Cambodia.

After spending some $300 million over the course of 15 years of legal proceedings, the tribunal convicted just three people for their part in the atrocities that annihilated as many as one-fourth of Cambodia’s population from 1975 to 1979.

In addition to Mr. Khieu Samphan, they were Nuon Chea, a top leader who was convicted and sentenced along with him in the genocide case in 2018 and who died the following year, and Kaing Guek Eav, known as Duch, a torturer and prison commandant who was convicted of crimes against humanity, murder and torture and who died last year.

Mr. Khieu Samphan and Mr. Nuon Chea were also convicted and sentenced to life in prison in an earlier trial in 2014 for crimes against humanity. They were found to have “encouraged, incited, and legitimized” the criminal polices of the Khmer Rouge.

Two other leaders — Ieng Sary, the former Khmer Rouge foreign minister, and his wife, Ieng Thirith, the former social affairs minister — were arrested but died during the proceedings. Other major figures died before being brought to trial, including Pol Pot, the supreme leader of the Khmer Rouge.

The tribunal is administered jointly by the United Nations and the Cambodian government and has been subject to pressure by Prime Minister Hun Sen, himself a former Khmer Rouge officer, to limit prosecutions.

The small number of convictions shows that Mr. Hun Sen “has successfully shaped the legacy of the court to his preferences,” said Craig Etcheson, a leading expert on the Khmer Rouge who is a visiting scientist at the School of Public Health at Harvard.

Youk Chhang, director of the Documentation Center of Cambodia, the repository of the documents that formed the basis of much of the trial, said it had achieved only limited success.

Like others, Mr. Youk Chhang contrasted the painstaking legal process and personal accommodations of the defendants with the harsh conditions and torture suffered by those imprisoned by the Khmer Rouge.

“Khieu Samphan requested of the judges to be allowed to go to the toilet if he wishes during the hearing,” he exclaimed in an email message. “What a joke!”

Experts on the proceedings said it is unlikely that Mr. Khieu Samphan will succeed in his appeal. But whether or not he does, he will remain in prison as a result of his earlier conviction in 2014. He had appealed that sentence and failed.