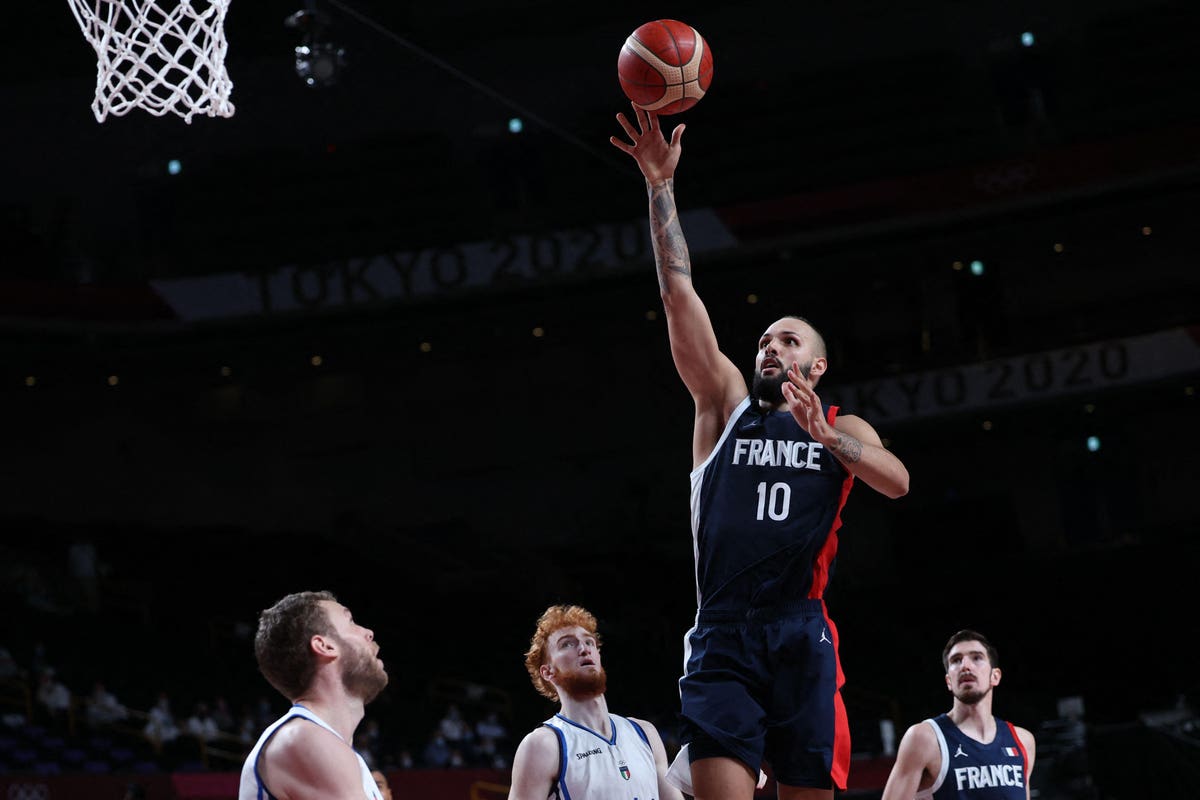 Knicks coach Tom Thibodeau had some trash talk for Evan Fournier after the team agreed to sign him to a four year, $78-million deal on Aug. 2.

During an introductory phone call while Fournier was at the Tokyo Olympics with France, Thibodeau gave the 6-foot-7 wing some business about the order of medals.

“When I was on the phone with Leon [Rose] and Thibs and Scott [Perry], the first thing that Thibs told me was as soon as I wrap up that silver I have to come to New York so we can talk,” Fournier said Tuesday at his introductory press conference. “So that was his way of talking a little bit of trash. And unfortunately that’s what happened.

“But I’m proud of what we accomplished with my country and the goal is to keep shining for France and in three years we have Paris in 2024 so we’ll see, we’ll see.”

Five days after the Fournier signing became public, Kevin Durant scored 29 points to lift the U.S. to an 87-82 win over France in the gold-medal game, avenging a loss in pool play. Fournier had 16 points, three rebounds and two assists in the loss.

Now that he’s on the Knicks and teaming up with former Celtics point guard Kemba Walker, Fournier is looking ahead to building off what the Knicks accomplished last season when they made their first playoff appearance in eight years.

“I weighed my options but it was pretty clear to me that New York was going to be the team for me and it made it easier because I didn’t have to expend much energy on that,” he said of the deal going down during the Olympics. “I could just focus on the Olympics.”

Fournier averaged 17.4 points, 3.4 assists and 3.0 rebounds last year in Boston, and will now team up with Julius Randle, R.J. Barrett, Derrick Rose, Walker and the rest of the core as the Knicks try to compete in a loaded Eastern Conference that features Brooklyn, Milwaukee and Philadelphia.

“[The Knicks were] a hard team to play against,” Fournier said. “They played hard, they played with discipline, you knew what they were going to do on the court and they executed extremely well. Teams like that are hard to beat because they don’t beat themselves and you have to play well to beat them. So looking at a team like that, it’s clear that they had togetherness, they practice well and they kept getting better and better.

“And as a player that’s exciting because as a player you want to be part of a group that’s together and that wants to win.”

Walker looks forward to playing with Fournier, too.

“I think it’s going to be really good,” the former UConn star said. “With my ability to get in the lane, hopefully I can draw multiple defenders and just get rid of the basketball, trusting my teammates. I know this guy right here [Fournier] is going to light it up. For sure, he’s going to shoot the crap out of the ball. And we got a bunch of young guys who we just drafted who are really, really good [Quentin Grimes, Deuce McBride, Jericho Sims] who I’ve been really impressed with watching Summer League. And some of the other young guys who have been here from last season, we plan on coming here, just bringing some leadership and just adding on to what they already got going.”

Fournier said he hasn’t yet been in touch with Randle or other Knicks players, but believes adjusting to his new teammates won’t be too hard.

“I know Julius tried to reach out,” Fournier said. “I was in Japan and it was hard to reach me so I actually have to call him.”

Asked if the Knicks could be better than their 41-31 record last season, Fournier said, “The goal is to be better for sure. But when you start a season, it’s hard to put numbers of wins. I think you have to get the right approach and take it day by day and then you work and see where you could go.

“But I feel like when you put a number, you also put a ceiling on what you could accomplish. So I think the mindset is just to come in and work and do the best we can and live by that pretty much.”