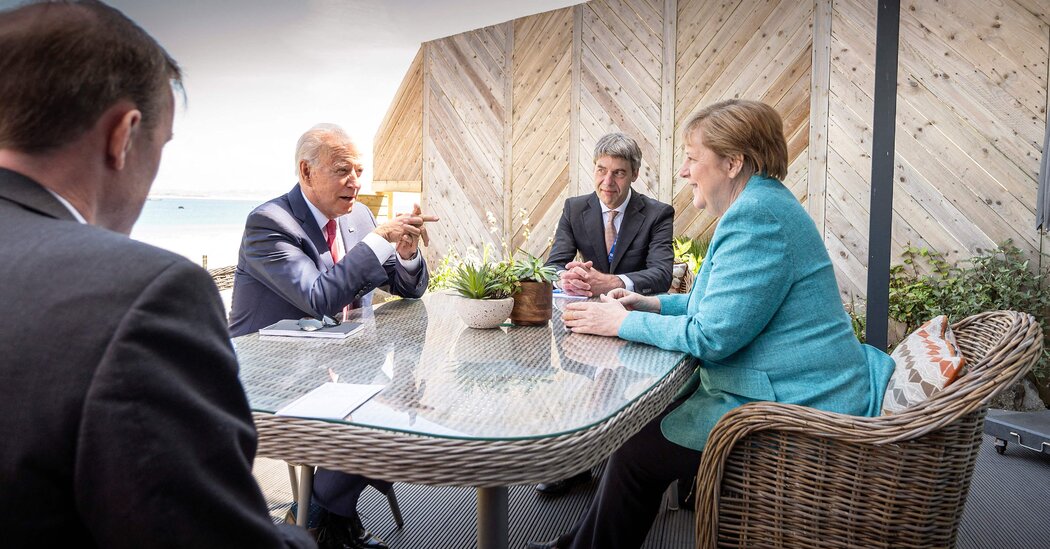 BERLIN — Angela Merkel is scheduled to arrive at the White House on Thursday for talks with the fourth U.S. president she has known since becoming German chancellor, on a visit partly about policy and partly about legacy as she prepares to leave office this year.

Over her more than 15 years in power, the relationship between Berlin and Washington has withstood disagreements over the detention camp at Guantánamo and allegations that the National Security Agency had tapped the chancellor’s phone. But President Donald J. Trump’s notoriously hostile exchanges with Ms. Merkel over NATO contributions, trade and multilateralism have left relations badly in need of a repair.

In President Biden, she now finds herself working with a man she has known for years and who has long supported a strong trans-Atlantic relationship and multilateral partnerships.

But there is much work to be done to restore relations. Most of all, Ms. Merkel would like to return stability and trust to the relationship and buffer it from what many in Europe now fear may be episodic disruptions tied to U.S. elections every four years.

“The concern is that, realistically, there could again be some other administration in the U.S. that might come back to what we saw during Trump,” said Peter Beyer, Germany’s coordinator for trans-Atlantic affairs.

“The question has been discussed and many people have worked their brains over how we can make the U.S.-German relationship so resilient, so strong that it will not fall back to that,” he said.

First, substantive differences between the nations — over a new Russian natural-gas pipeline to Europe, over whether to embrace or contain a rising China and over how to manage the coronavirus pandemic — will have to be navigated.

In choosing the chancellor as the first European leader to visit the White House since he took office, Mr. Biden is making it clear that the invitation is about more than allowing Ms. Merkel a victory lap while she picks up an honorary doctorate from Johns Hopkins — to add to those she has already received from Harvard and Stanford.

The president is eager to get Germany, which has Europe’s largest economy, on board for some of his own geopolitical goals before the campaign cycle for the U.S. midterm elections begins heating up, especially on China and Russia.

The question remains how much Ms. Merkel, who throughout her career has embraced a cautious, consensus-based approach, is willing to engage the president as her fourth term in office is winding down. A new German government will be sworn in after national elections on Sept. 26. — this one without her, says Ms. Merkel, who turns 67 on Saturday.

“Washington is offering a partnership in leadership,” said Ulrich Speck, a senior visiting fellow at the German Marshall Fund. “But that means Ms. Merkel has to show leadership.”

Ms. Merkel is a firm believer in engagement with China, Germany’s most important trading partner. More than 212 billion euros’ worth of goods — over $250 billion — were bought and sold between the two in 2020, according to German government figures. Before Mr. Biden took office, she pushed ahead with a new investment deal between the European Union and China that still needs ratifying by the European Parliament.

Before they even get to China, however, there is Russia and the thorny issue of Nord Stream 2, a natural gas pipeline that will run directly to Germany under the Baltic Sea from Russia. The project is bitterly opposed by Mr. Biden and Congress — along with several of Germany’s European partners — but Ms. Merkel and her government firmly support it.

Speaking alongside of President Volodymyr Zelensky of Ukraine at the chancellery on Monday, Ms. Merkel said that she would discuss “a common position” on the pipeline with Mr. Biden, but that she did not expect they would reach a solution.

Earlier this year, Mr. Biden waived congressional sanctions on the Russian company building the pipeline and its German chief executive, effectively conceding that an effort to halt the project, which is expected to be complete by the end of this year., was not worth the likely cost to U.S.-German relations.

The United States fears that Nord Stream 2 will provide Moscow with leverage over Europe’s energy security and threaten Ukraine, which earns around $1 billion annually from another pipeline through its territory that Russia could eventually stop using. Ms. Merkel insisted that the European Union and Germany remained committed to ensuring that gas bound for Europe continues to transit through Ukraine.

“I believe we are not without power in this regard,” Ms. Merkel said. “We have promised this to Ukraine and we will stick to it.” The German chancellor would uphold the agreement, she added.

What happens with Nord Stream 2 should be set within the wider context of a new, trans-Atlantic joint position on Russia, said Jeff Rathke, president of the American Institute for Contemporary German Studies at Johns Hopkins University. But again this would require Ms. Merkel to take on a more assertive leadership role on the international stage that many in Washington have been seeking from Berlin for years.

“What the U.S. needs is some German partnership in approaching this problem,” Mr. Rathke said in a talk with the Center for a New American Security.

The chancellor’s refusal to agree to the lifting of patents for the coronavirus vaccines, which Mr. Biden wants, is an issue that activists and some lawmakers hope will be on the agenda on Thursday. Ms. Merkel remains firmly opposed to the idea, arguing that only if the scientists who develop vaccines are allowed to protect their ideas will they be encouraged to continue the costly and lengthy research required.

Before Ms. Merkel’s visit, several of her most senior ministers and a team of her advisers have made trips to Washington, reflecting the wider importance many in Berlin are placing on this visit as a chance to solidify a joint policy approach that will outlast the chancellor’s term.

Since she was first sworn into office in November 2005, several of Ms. Merkel’s trips to Washington have celebrated the chancellor, the first woman and the first German to have grown up in the former East Germany to hold that office.

In 2009, she was invited to address the joint houses of Congress and two years later, President Barack Obama bestowed on her the nation’s highest civilian honor, the Presidential Medal of Freedom. Both honors recognized the chancellor’s steadfast devotion to democracy, shaped by having spent so much of the first 35 years of her life in the autocratic former East Germany.

In her address to Congress, Ms. Merkel told of how her vision of the United States sustained her throughout her childhood under communism. “I got excited about the American dream — the opportunity for anyone to succeed, to make it through their own efforts,” she said.

Ms. Merkel stressed those values repeatedly throughout Mr. Trump’s term in office, earning her the title of the West’s last defender of liberal democracy. Although she refused to publicly accept that mantle, she never budged from her defense of the values that she still sees as defining America.

In addition to her talks with the president on Thursday, Ms. Merkel will also meet with Vice President Kamala Harris, whom she warmly congratulated as “the first woman in this office and, as the child of two immigrant parents, for many people an inspiration, an example of the possibilities of America.”

Part of the legacy element of this trip will be focused on cementing those values as shared between the United States and Germany and celebrating Washington’s renewed embrace of the multilateral systems that it helped to create. They have ensured the development of modern Germany into a the peaceful, prosperous anchor of stability in the heart of Europe, said Cathryn Clüver, director of the German Council on Foreign Relations.

“There will be a lot of symbolic politics, but that symbolism after the Trump era is necessary,” Ms. Clüver said. “Both sides of this relationship need it.”