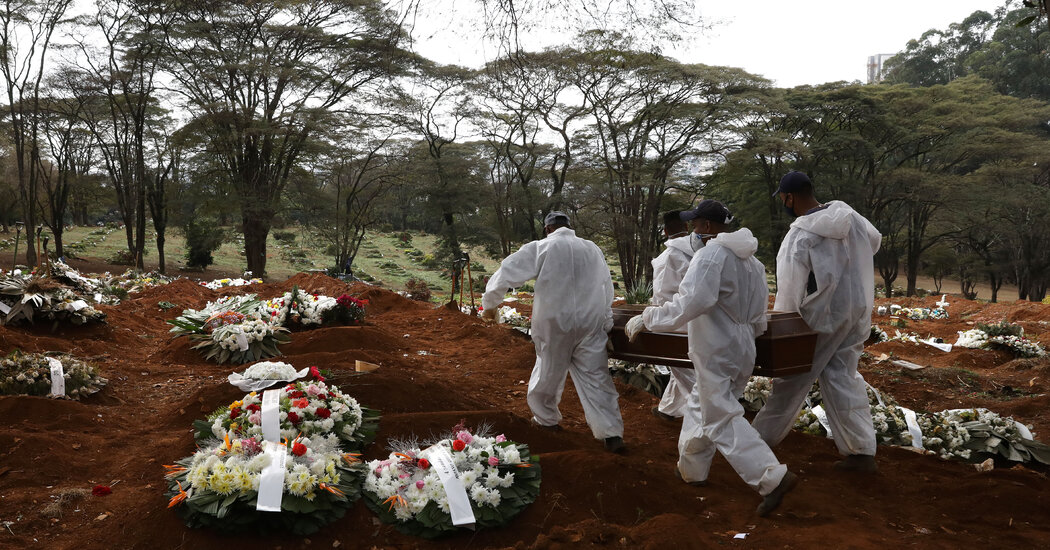 The coronavirus has reversed a steady rise in life expectancy in Brazil, with an estimated decline of 1.3 years in 2020 and an even more accelerated drop during the first months of 2021, according to a new report published in the journal Nature Medicine.

Significant, abrupt declines in life expectancy are rare and Brazil’s represents a major blow given the strides the country had made in improving health outcomes in recent decades, said Marcia Castro, the chair of the Department of Global Health and Population at Harvard, the lead author of the study.

“We expect declines of this magnitude when you have a major shock that leads to high mortality, like a war or a pandemic,” she said.

The pandemic has continued to steadily worsen in Brazil, where vaccinations have lagged. At least 18 million Brazilians have been infected so far, or at least one in 11 people, and the country is averaging over 65,000 new reported cases and over 1,600 deaths a day, according to official data. But, as in India, which has the world’s third-largest official death toll, many experts believe the numbers understate the true scope of the country’s epidemic. So far, about a third of Brazil’s population has had at least one shot of a vaccine, according to Our World in Data.

The decline in life expectancy is a jarring setback for Brazil, Latin America’s largest nation, which has spent billions of dollars in recent decades to expand the reach and quality of its universal public health care system.

Between 1945 and 2020, life expectancy in Brazil increased from 45.5 years to 76.7 years, an average of about five months per year. The setbacks of the Covid-19 era have reverted the country to 2014 levels, according to the study.

Brazil experienced a second wave of coronavirus cases in the first few months of this year that has been far deadlier than the first one, which receded at the end of 2020.

Dr. Castro and fellow researchers estimated that the resulting decline in life expectancy for 2021, based on the death toll recorded in the first four months of the year, will be about 1.78 years.

Dr. Castro said Brazil’s life expectancy rate was likely to decline even more as the virus continued to kill hundreds of people each day, many of whom are relatively young. The average daily death toll for the past week was 1,610, according to a New York Times tracker.

“The decline in 2021 is going to be just horrible,” Dr. Castro said. “We are now losing even younger people.”

Mr. Kim did not clarify whether he was referring to an outbreak in North Korea, where the authorities had said there were no cases of the virus. But state media reported that the matter was serious enough for Mr. Kim to convene a meeting of the Political Bureau of his ruling Workers’ Party on Tuesday, during which Mr. Kim reshuffled the top party leadership.

Senior officials neglected implementing antivirus measures and had created “a great crisis in ensuring the security of the state and safety of the people,” Mr. Kim said.

A report said there would be some “legal” consequences for the officials.

The news agency said that some members of the Politburo and its Presidium, as well as some Workers’ Party secretaries, were replaced. In North Korea, all power is concentrated in the leadership of Mr. Kim, and he frequently reshuffles party officials and military leaders, holding them responsible for policy failures.

The North claims officially to be free of the virus, although outside experts remain skeptical, citing the country’s threadbare public health system and lack of extensive testing.

Last year, it created a buffer zone along the border with China, issuing a shoot-to-kill order to stop unauthorized crossings, according to South Korean and U.S. officials. South Korean lawmakers briefed by their government’s National Intelligence Service last year have said that North Korea executed an official for violating a trade ban imposed to fight the virus.

Last July, when a man from South Korea defected to the North, North Korea declared a national emergency for fear he might have brought the virus.

But Mr. Kim has also shown confidence that at least his inner circles were virus-free, sometimes presiding over meetings of party elites where no one wore masks.

During the meeting on Tuesday, Mr. Kim urged party officials to double down on his efforts to build a “self-reliant” economy. As North Korea’s economy has been hit hard by the pandemic, Mr. Kim has acknowledged that his five-year plan for growth had failed and instructed his officials to wage an “arduous march” through difficult economic times. This month, he warned of a looming food shortage.

The party meeting on Tuesday “suggests that the situation in the country has worsened beyond the capacity of self-reliance,” said Leif-Eric Easley, an associate professor of international studies at Ewha Womans University in Seoul.

“Pyongyang may be setting up a domestic political narrative to allow the acceptance of foreign vaccines and pandemic assistance,” he said. “Kim is likely to blame scapegoats for this incident, purging disloyal government officials and replacing them with others considered more capable.”

The Supreme Court on Tuesday refused to lift a moratorium on evictions that had been imposed by the Centers for Disease Control and Prevention in response to the coronavirus pandemic.

The court gave no reasons for its ruling, which is typical when it acts on emergency applications. But Justice Kavanaugh issued a brief concurring opinion explaining that he had cast his vote reluctantly and had taken account of the impending expiration of the moratorium.

“The Centers for Disease Control and Prevention exceeded its existing statutory authority by issuing a nationwide eviction moratorium,” Justice Kavanaugh wrote. “Because the C.D.C. plans to end the moratorium in only a few weeks, on July 31, and because those few weeks will allow for additional and more orderly distribution of the congressionally appropriated rental assistance funds, I vote at this time to deny the application” that had been filed by landlords, real estate companies and trade associations.

At the beginning of the pandemic, Congress declared a moratorium on evictions, which lapsed last July. The C.D.C. then issued a series of its own moratoriums.

“In doing so,” the challengers told the justices, “the C.D.C. shifted the pandemic’s financial burdens from the nation’s 30 to 40 million renters to its 10 to 11 million landlords — most of whom, like applicants, are individuals and small businesses — resulting in over $13 billion in unpaid rent per month.” The total cost to the nation’s landlords, they wrote, could approach $200 billion.

The moratorium defers but does not cancel the obligation to pay rent; the challengers wrote that this “massive wealth transfer” would “never be fully undone.” Many renters, they wrote, will be unable to pay what they owe. “In reality,” they wrote, “the eviction moratorium has become an instrument of economic policy rather than of disease control.”

In urging the Supreme Court to leave the moratorium in place, the government said that continued vigilance against the spread of the coronavirus was needed and noted that Congress had appropriated tens of billions of dollars to pay for rent arrears.