Live Updates: Death Toll From Flooding in Europe Passes 100 and Is Likely to Grow 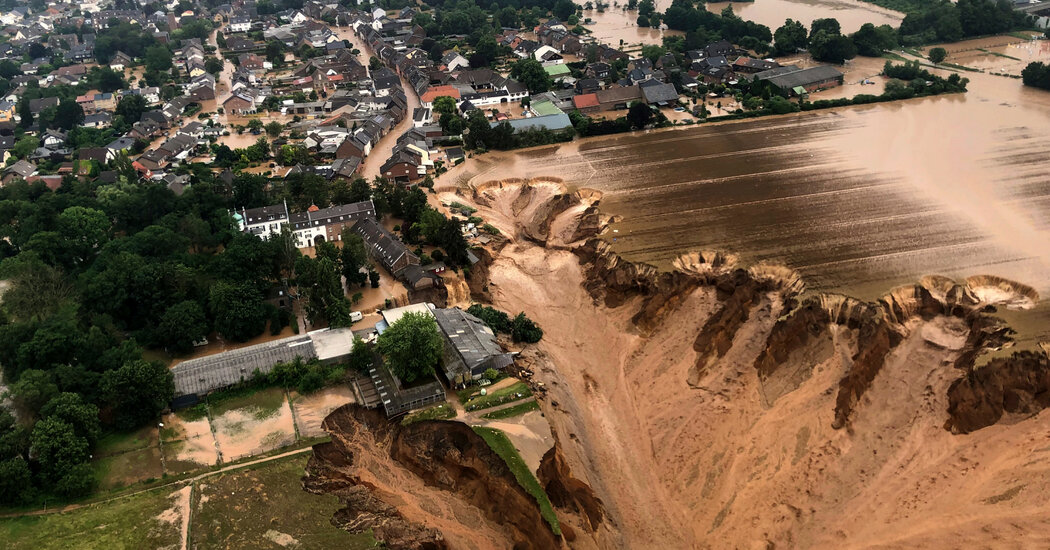 The scenes of devastation from the floods came from all around Western Europe as the death toll passed 100 on Friday. Roads buckled and washed away. Cars piled atop one another. Houses were inundated to the roof tiles. Frightened residents were being evacuated in the shovels of earth movers.

But nowhere was affected more than Germany, where hundreds were still unaccounted for and the death toll had reached 93 and was expected to rise as rescue workers combed through the debris. At least a dozen were reported dead in Belgium.

On Friday, rain was still falling.

As rescue workers scrambled to reach cutoff villages that are remote on the best of days, the heavy rains — coming after several of the driest years on record for much of Central Europe — had brought some of the most severe flooding in decades.

Germans struggled even to grasp the scale of the calamity. Chancellor Angela Merkel expressed her shock and solidarity from Washington, where she was visiting the White House. Politicians of all stripes called for a truce in the German election campaign. The focus was on how to deal with a disaster that was growing by the hour, with thousands left homeless, in addition to the missing.

The authorities in the Ahrweiler district of Rhineland-Palatinate said late Thursday that 1,300 people remained unaccounted for in their region, where the Ahr river swelled to an angry torrent late Wednesday, ripping through the towns and villages that hugged its banks. 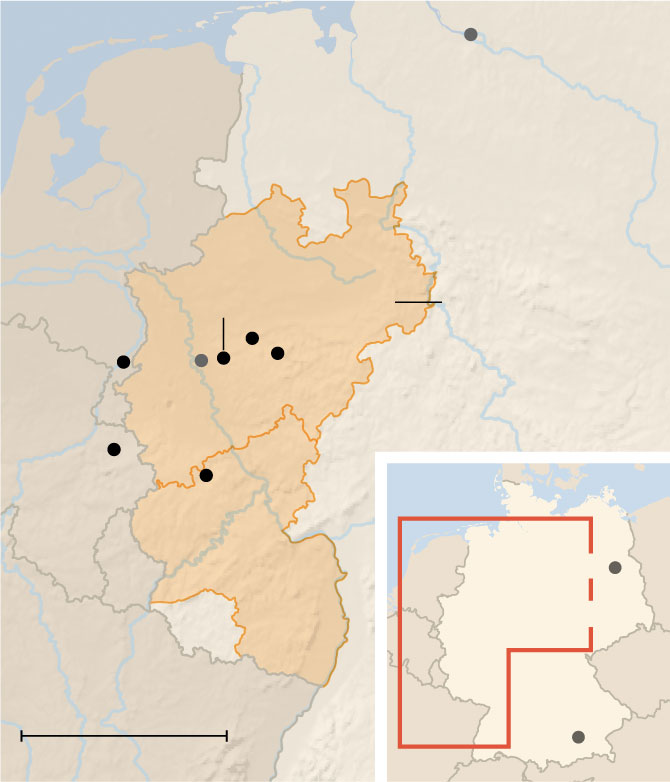 Roger Lewentz, Rhineland-Palatinate’s interior minister, was unable to give an exact number of missing in his state, citing the extreme difficulty of the situation on the ground. And he did not sound hopeful.

“We do not yet know for sure whether some of them may be on vacation or simply unavailable. After all, the power and telephone connections are down in many affected locations,” Mr. Lewentz told Der Spiegel newsmagazine. “But it has to be said, unfortunately, that the longer the day goes on, the more we have to expect to get more bad news.”

Everywhere, rescue efforts during the flooding in Central Europe were hampered. Electricity and communications networks were down, roads and bridges were washed out, drinking water was scarce. The worst hit were thinly populated, rural areas.

At least 50 people had been confirmed dead in the Ahrweiler district of Rhineland-Palatinate in Germany, where the Ahr river swelled its banks on Wednesday, sending rushing torrents of water through towns and villages, washing away everything in its wake — cars, homes and businesses.

“Many of the roads are closed and there are bridges that simply aren’t there any more,” a spokesman for the police in Koblenz said of the region surrounding the Ahr river.

The disaster was not limited to Germany. The broadcaster RTBF reported at least 12 dead in Belgium, where the Meuse river overflowed its banks, flooding villages and the center of Liège, leaving thousands without power.

“Emergency calls are coming from the houses, but in many cases a rescue is not possible,” authorities in Cologne, Germany, said in a statement. They released photographs showing a large, dark sinkhole where the saturated earth appeared to have simply given way, taking homes and buildings with it.

In Trier, near the border with Luxembourg, German television showed people being evacuated from threatened neighborhoods in the shovels of earth movers. Health care workers wheeled patients down the streets in their beds.

In Switzerland, where more rain was expected in the northern Alps on Friday, the authorities warned of a further rise in the water levels at major lakes and rivers that could cause additional flooding. In the city of Lucerne, where Lake Lucerne reached critical levels, bridges and roadways had been closed off after flooding.

In the city of Schleitheim, Switzerland, where a river burst its banks, residents recorded videos of cars being washed through the streets in a swirling flood of muddy water and debris.

The Netherlands was spared the death and destruction that hit Germany and Belgium. But in the southern city of Valkenburg, damage was severe. Hundreds of houses were without power and the center of the city was flooded.

“The damage is incalculable,” Mayor Daan Prevoo of Valkenburg told the Algemeen Dagblad newspaper. He predicted the repairs would take weeks.

The devastation in Europe caused by the severe weather came just days after the European Union announced an ambitious blueprint to pivot away from fossil fuels over the next nine years as part of plans to make the 27-country bloc carbon-neutral by 2050. Environmental activists and politicians were quick to draw parallels between the flooding and the effects of climate change.

On Friday, Frank-Walter Steinmeier, Germany’s president, blamed climate change for the floods: “Only when we take action against climate change can we keep the events that we are now experiencing within limits,” he said in a televised statement from Berlin.

The impact of climate change is one of the issues that has been fiercely debated in Germany before the September elections in which the Greens party is in the running for second place, behind the conservative Christian Democrats.

“The catastrophic results of the heavy rain in the past few days are largely homemade,” said Holger Sticht, who heads the regional chapter of Friends of the Earth Germany in North Rhine-Westphalia. He blamed lawmakers and industry for building in floodplains and woodlands. “We urgently need to change course.”

Armin Laschet, the leader of the German state of North Rhine-Westphalia, said at a news conference on Friday, “Our state is experiencing a flood catastrophe of historic scale.”

Flooding is a complex phenomenon with many causes, including land development and ground conditions. While linking climate change to a single flood event requires extensive scientific analysis, climate change, which is already causing heavier rainfall in many storms, is an increasingly important part of the mix. Warmer atmosphere holds, and releases, more water, whether in the form of rain or heavy winter snowpack.

One of the places in Germany hardest hit by the flooding was tiny Schuld, where the sheer speed with which the destruction arrived shocked many in the once-tidy village of half-timbered houses decorated with geranium-filled flower boxes.

After the river swelled late Wednesday, carrying vehicles bobbing like bath toys, six houses collapsed entirely, and half of those that remained standing had gaping holes torn by floating debris, now piled in a jumble in the streets.

“It went so fast. You tried to do something and it was already too late,” a resident of Schuld told Germany’s ARD public television after some were allowed to return late Thursday to survey the wreckage.

As the waters rose, patrons at a small hotel in the village of Insul, near Schuld, asked dining room employees if they needed to be worried, Erika Stollenwerk, who works in the kitchen, told ARD television.

She assured them there was nothing to worry about, she said. But 10 minutes later, they had to flee the building.

“We have always had high waters,” Ms. Stollenwerk said. “But like this? It’s a catastrophe.”

In nearby Sinzig, efforts to evacuate a care home for the severely handicapped came only moments before the gushing waters swept through the lower levels, killing 12 of the residents.

By early Friday, such accounts proliferated in the continuing downpour. Gushing muddy waters washed several houses away in a village near Cologne, leaving rescue workers helpless to respond to emergency calls.