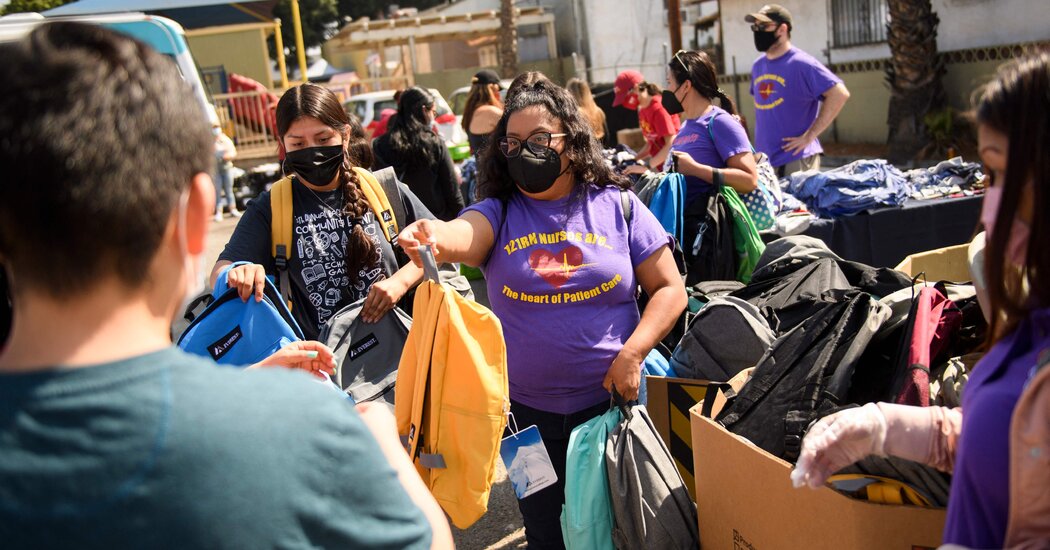 As schools prepare to reopen five days per week amid an alarming surge in the coronavirus, Los Angeles and Chicago, the second and third-largest districts in the nation, announced on Friday some of the strongest teacher vaccine mandates to date.

Educators and school staff in both cities will have to be fully vaccinated by Oct. 15. School begins in Los Angeles on Aug. 16 and in Chicago on Aug. 30.

In Los Angeles, district employees will also have to submit to regular virus testing, regardless of vaccination status. In Chicago, staff will be tested weekly until the vaccine deadline. Both systems said there will be an exemption process for those with disabling medical conditions or sincerely held religious beliefs.

California and Illinois are also both requiring everyone to use masks inside schools when they reopen.

The new vaccine mandates will put pressure on other large school systems, particularly those in liberal states, to institute similar policies. New York City, the nation’s largest district, is currently planning to offer teachers the choice of either vaccination or weekly virus testing.

Leaders of both national teachers’ unions, the National Education Association and the American Federation of Teachers, have said they support vaccine mandates, but that details should be negotiated locally.

Nearly 90 percent of the nation’s educators are vaccinated, according to a survey from Education Week. Yet a small but vocal group of rank-and-file educators oppose vaccine requirements.

After 18 months of classroom closures and hybrid schedules, families and schools had been planning for a return to normalcy this fall. Research from the previous academic year had shown that schools could be operated relatively safely with mitigation strategies such as masking, distancing, hand washing and ventilation.

There is some reassuring evidence from the United Kingdom that during its Delta surge in June, schools remained among the safest places for children to spend time. But it is unclear whether the Delta variant presents more danger in American schools, given the patchwork of mitigation strategies.

Before the Chicago vaccine mandate was announced, Kenzo Shibata, a high school social studies teacher in the district, had considered requesting a leave of absence. A colleague with whom he worked closely had been “steadfast” in her refusal to be vaccinated, he said — a source of major anxiety for Mr. Shibata, whose wife is undergoing cancer treatment and has compromised immunity. Their son is too young to be vaccinated.

On Friday, Mr. Shibata said he was hopeful about the district’s mandate, though he remained concerned about fellow teachers asking for exemptions.

“I think this will cut back risk dramatically,” he said. “I’m still not feeling like five days a week in person is a good idea, but this is a step in the right direction.”