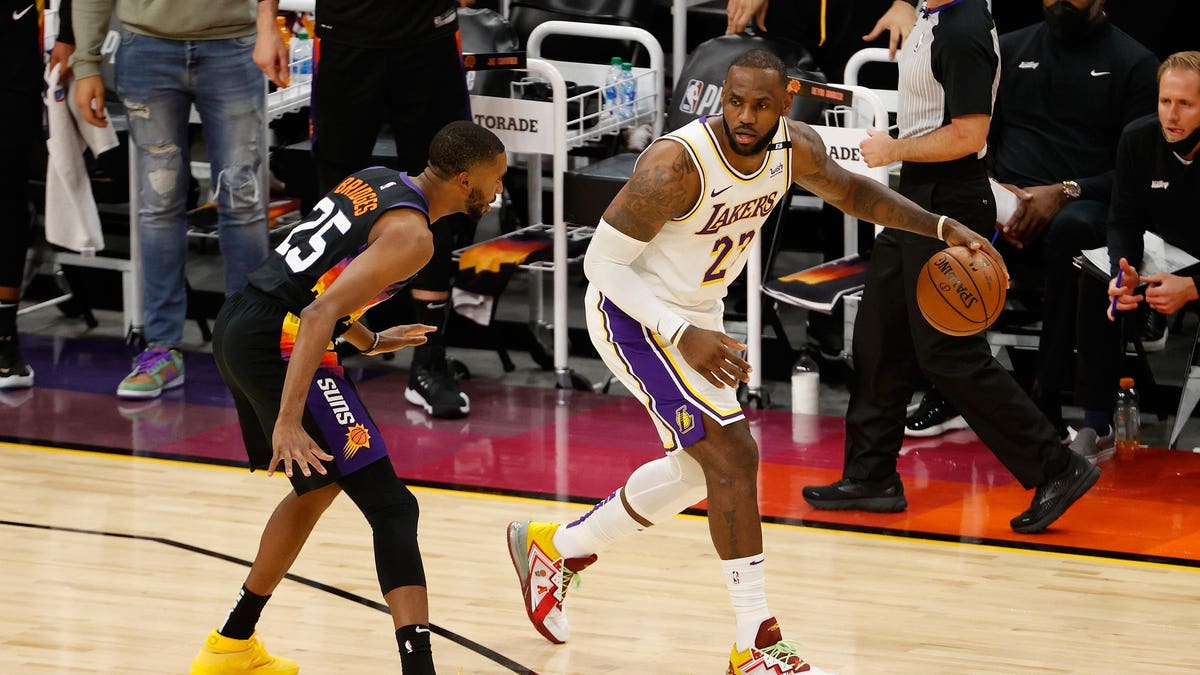 We were once again reminded of the Los Angeles Lakers’ clear flaws in their 99-90 opening game loss to the Phoenix Suns in Game 1 of their first round series.

For some reason — whether it’s due to the fact that they’re the defending champions or because the Lakers feature LeBron James and Anthony Davis — people have overlooked the deficiencies of this year’s Lakers squad.

Despite limping into the postseason following a three-point victory over the Golden State Warriors in the play-in game earlier this week — a team not even part of the postseason bracket — optimism was running high once again for the 2020-21 Lakers.

And as quickly as the Lakers reinvigorated hope that they are the team to beat in the playoffs, they just as quickly dashed that optimism with a listless loss to the Suns. Heck, it was a Suns squad that featured a banged-up Chris Paul — a “crack” in his shoulder — for much of the game.

The Lakers failed to take advantage of Paul’s injury and allowed Devin Booker and DeAndre Ayton — two young guns playing in their first playoff game — to outshine both James and Davis.

Los Angeles went to the free-throw line 16 more times than the Suns — and converted on just 60.7 percent of them. They were out-rebounded 47-33 on the offensive glass and 16-to-10 in the offensive rebounding department.

In other words, Phoenix not only out-hustled Los Angeles — they took Game 1 a lot more seriously than the Lakers did.

While the Lakers feature two of the best players in this series, they don’t field the best team — that distinction belongs to the Suns.

The Lakers have attempted throughout the season to fix their issues — spacing, efficient shooting and big men who can actually do things outside of jump shooting — by mixing up their lineups and making midseason acquisitions such as Andre Drummond and Ben McLemore.

But the bottom line is this — this team is a mishmash of all the wrong parts.

We can point to how both James and Davis had off nights — 31 points combined on 11-of-29 shooting. We can center on Davis’ lack of aggressiveness — a team-worst minus-18 plus/minus rating — as an excuse for the Lakers’ defeat in Game 1.

But the excuses need to stop: this team has been coasting on excuses all season long for as long they’ve been coasting on reputation — before they almost fumbled away a playoff spot towards the end of the regular season.

And while on paper, the team looks just as good — if not better — than the one that won the championship last season, the sum of the parts don’t live up to its billing.

It also doesn’t help when the competition — the Lakers’ matchup in this playoff series is a prime example — is a lot stiffer than it was last season.

It’s true that the Lakers lost their first playoff game in each of their first two postseason series last season. They bounced back to win each of those series in five games.

Just don’t expect that to happen as easily against the Suns.

No, the Lakers won’t be able to take advantage of an overmatched Houston Rockets squad featuring a 6-foot-7 center this time around.

And no, they won’t be able to exploit an overmatched Portland Trail Blazers squad lacking an inside presence in this year’s playoffs.

Don’t mistake this rant as a prediction that the Lakers are done in this series. They could very well bounce back and ride the coattails of a dominant James/Davis duo to victory.

But don’t overlook this team’s clear deficiencies due to James and Davis’ lingering injuries throughout the season.

The offense still struggles. The team still coasts when it can’t afford to. And the Lakers still can’t convert on offense outside of James and Davis.

While the Lakers could very well bounce back in this series, the squad’s flaws will eventually lead to elimination — not a championship repeat.