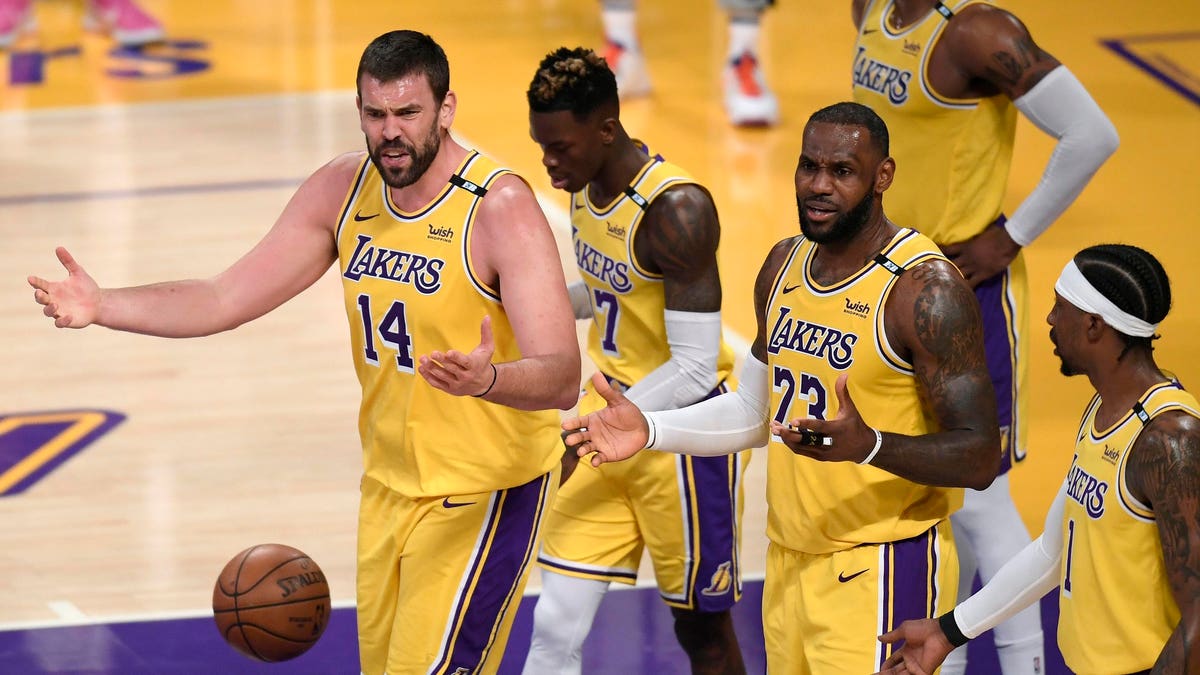 As the Los Angeles Lakers look to continue to round out the remainder of their roster, one prominent player may not even be a part of the team’s plans next season.

According to NBA insider Marc Stein, Marc Gasol is “not a lock to return” to the Lakers next season.

“I’m hearing that Marc Gasol is not a lock to return to the Lakers, even after Gasol said following Spain’s quarterfinal loss to the United States in the Olympics that he intends to play out the final year of the two-year deal he signed with Los Angeles,” said Stein. “It’s not yet clear if that means Gasol is poised to be set free to play elsewhere in the NBA or if he would ultimately opt to finish his career in his home country like brother Pau.”

The veteran center is due to turn 37 years old next season — which doesn’t exactly help matters considering the Lakers already added six players over the age of 30 during the offseason.

Gasol’s first season in Los Angeles wasn’t exactly a positive marriage. While he began the season as the team’s starting center, he was in and out of the lineup as he averaged career lows across the board.

The former Defensive Player of the Year looked like a shell of his former self as he averaged 5.0 points, 4.1 rebounds in just 19.1 minutes per game.

While the Lakers didn’t completely abandon the Gasol project last season, they would only go to him as a last resort. During the first four five games of the playoff series against the Phoenix Suns, Gasol didn’t start. In fact, in Game 1, he was a healthy scratch.

It wasn’t until Game 6 that the Lakers actually went with Gasol in the starting lineup. But he failed to give them much of a spark as Los Angeles not only lost Game 6, but Gasol contributed zero points and just three rebounds.

One could argue Gasol losing his starting spot due to the arrival of Andre Drummond was unfair. Although his individual stats didn’t appear off the charts and his skills are clearly limited at this stage of his career, the Lakers played better with Gasol in the lineup compared to other combinations.

The Gasol-LeBron James-Anthony Davis-Dennis Schroder-Kentavious Caldwell-Pope lineup outscored opponents by 12.8 points per 100 possessions and was the Lakers’ best among their five most-used lineups last season, per Cleaning the Glass.

However, this report from Stein doesn’t exactly come as much of a surprise. The Lakers had reportedly shopped Gasol along with Alex Caruso before the latter signed with the Chicago Bulls to the Minnesota Timberwolves.

In other words, the Lakers have been very upfront with their feelings on Gasol. They clearly have no issue parting with the veteran center. But who is willing to take him in a trade?

Gasol Could Be Useful As Trade Bait

It would appear the Lakers would need to package Gasol with another player in a trade in order to get rid of him. Considering eight of the team’s players are newcomers, that won’t be a viable option until the midseason point of the upcoming regular season.

Considering the Lakers are in salary cap purgatory and are forced to fill out the last two spots of their roster with even more veteran’s minimum salary players, it wouldn’t make any sense to cut Gasol right now — especially with just one year and $2.6 million remaining on his deal.

Again, considering his expiring contract, Gasol will be easy to move at the trade deadline if packaged with another player — which could result in the Lakers actually acquiring a difference-maker.

While Gasol is the odd man out as he doesn’t fit into the team’s future plans — especially with their new look following the acquisition of Russell Westbrook — he’ll play any role asked of him.

Although Gasol is no longer the elite defender that he was, remains an inept offensive rebounder and is simply slow, he can still score and shoot a 3-pointer when called upon.

The 13-year veteran converted on 41.0 percent of his 3-point attempts last season. That’s a higher 3-point shooting percentage than any team in the NBA last season with the exception of the Los Angeles Clippers.

Which will make this marriage between both sides feasible until the Lakers are presented with the opportunity to move on from the former All-NBA player.