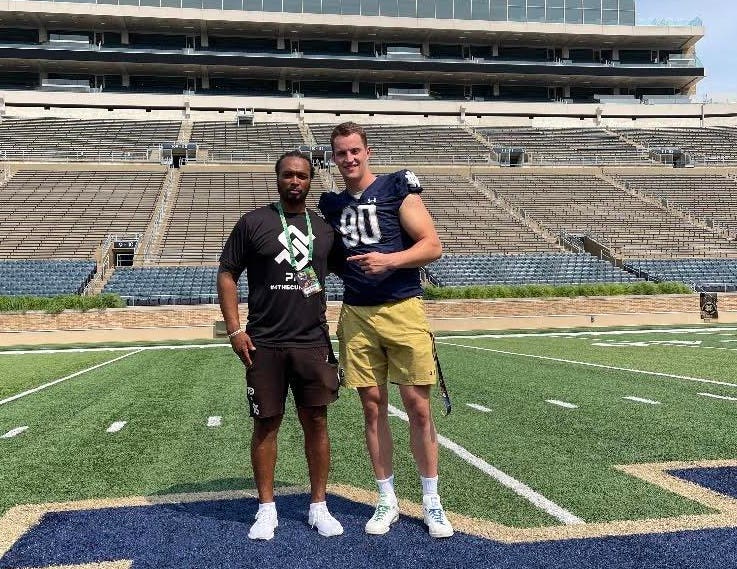 Brandon Collier, a football visionary known as the Ambassador, laughs over the phone when asked how much sleep he gets.

With Collier at the wheel, PPI’s fourth annual Dreamchasers bus tour crisscrossed the U.S. again this summer in search of college scholarship offers for talented European teenagers. Two separate groups of about 30 American football prospects, hailing from 10 different countries, made unofficial visits to nearly 40 campuses in June and July.

About a third of them received some sort of scholarship offer with national signing day still nearly six months away, and in four years of dream chasing the conversion rate is better than 60 percent.

Collier’s brainchild has come a long way since 2017, when the summer tour consisted of just 13 prospective student-athletes who stopped at 10 college football facilities in nine days. Rutgers, Temple and Towson State were among the earliest connections Collier made for his atypical collection of prodigies.

By 2018, the list of attendees had doubled. It spiked again in 2019 to 43, boosted by a developmental camp that March that saw coaches from Notre Dame, Michigan, Penn State and Georgia Tech visit PPI in Germany.

After a Covid-mandated break in the action, the Dreamchasers were back at it this summer.

These aren’t courtesy visits, either. Penn State coach James Franklin treated Collier’s kids as guests of honor upon their arrival in Happy Valley; Ohio State’s Ryan Day did the same in Columbus.

Notre Dame coach Brian Kelly gave a 30-minute talk to the group — “He’s not doing that for everybody,” Collier said — and even Alabama’s Nick Saban made them feel special.

Well, specifically a Swedish tight end named Theo Melin Ohrstrom, who happens to stand 6-foot-6 and weigh 245 pounds while testing off the charts. A rising junior with a four-star rating and designs on reclassifying into the Class of 2022, Melin received a scholarship offer from Saban off a single workout.

‘‘The kids see these coaches really pay respect to me in a way,” said Collier, a former UMass defensive end who briefly played in the Canadian Football League before landing in Germany. “Everybody knows who these coaches are, and they know I’m in it for the right reasons. We got a group of  international kids taking pictures with (big-name coaches). You can’t pay enough money to get something like this.”

Even with a skeleton staff that includes just two European area scouts and one other full-time administrator, Collier says he’s hardly getting rich off his idea. Young players and their families pay to attend a series of combine-like gatherings around Europe throughout the year, and the most promising of those prospects get invited to pay their way onto the Dreamchasers’ tour bus.

Just 10 percent of this year’s 600-player applicant pool was selected to make the trip.

“I don’t want to waste the kids’ time,” Collier said. “I’m not looking to take the kids’ money. If they don’t have a chance to get a scholarship, I don’t invite them over.”

They sleep four to a room at Comfort Inns and similar motels to keep the cost down, and you should see Collier’s kids crush the free breakfast buffet in the lobby. Including airfare, transportation, lodging, meals and a tour participation fee, it can cost nearly $4,000 per player.

That, however, is a relative bargain if it ends up netting a four-year scholarship offer to play college football in the U.S.

Collier is open to the concept of corporate sponsorship, and he recently scheduled meetings in Los Angeles with a production company that has shown interest in a future reality TV series or documentary. For now, however, he and PPI are operating on a shoestring budget, even in these early days of Name, Image and Likeness opportunities.

“Everybody tells me you can’t do it yourself, which I know, but it’s hard to find somebody that’s willing to work for the kids like me,” he said. “It’s hard to step away, but for it to grow like it needs to, I want to have some type of full-time scout in every country in Europe.”

In the next two to five years, Collier sees himself as the CEO of an operation with a team of full-time staffers handling the recruiting portion of the business. Close to 20 prospects are signing college scholarships each year now out of PPI, and Collier sees no reason that number can’t surge to 50 per year or even 100 someday.

He says Germany alone has over 200 American football clubs. His estimate for how many are playing youth football throughout the European Union?

To put PPI’s business opportunity in football terms, Collier suggests it’s only in the second quarter of an amazing growth story.

“The first three years we were just laying the groundwork and getting people to believe,” he said. “Now people see the talent and they believe. If I can help change close to 100 kids’ lives pretty much by myself, imagine if I had a staff of 20 to 30 guys. That would be thousands of kids we could help.”

Sleep? That can wait.