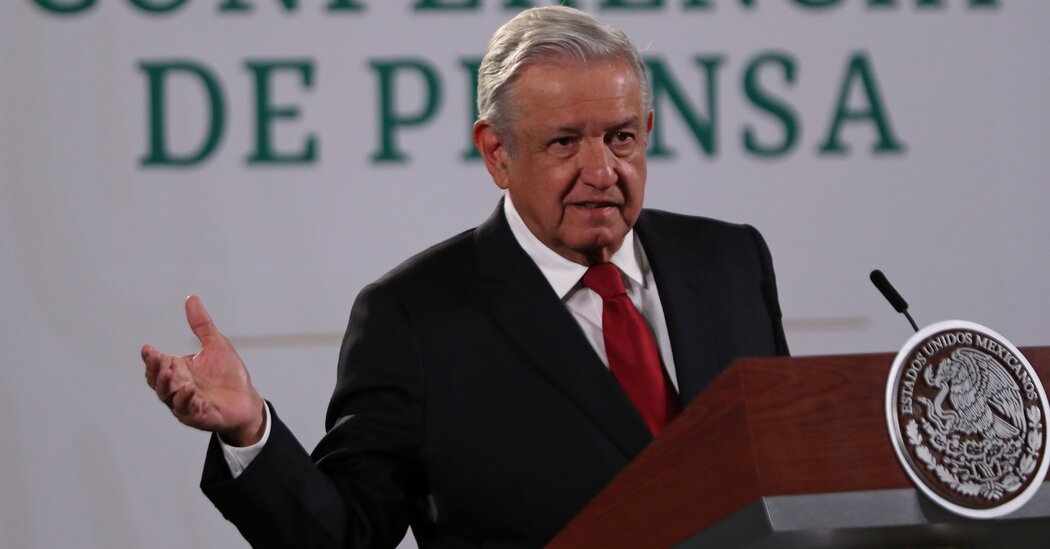 MEXICO CITY — Known for his incessant criticism of the press, President Andrés Manuel López Obrador of Mexico on Tuesday came out in support of a TV news anchor who was apparently threatened by the leader of a powerful drug cartel.

Mr. López Obrador’s unusual defense of a journalist came after a video circulated widely on social media in which a man claiming to be the leader of the Jalisco New Generation Cartel threatened to kill the anchor, Azucena Uresti of Milenio TV, because of her critical coverage.

“I completely condemn those threats,” Mr. López Obrador said during his morning news conference. “I reiterate my solidarity with this journalist, Azucena Uresti, and to all journalists, with the guarantee that our government will always protect those who carry out this job.”

In reality, the government has done little to protect them. Journalists are regularly murdered in Mexico because of their work, giving added credibility to the death threat from one of the country’s most violent drug cartels.

“Mexico is the most dangerous country for journalists in the Western Hemisphere, and it has had that status for a very long time,” said Jan-Albert Hootsen, Mexico representative for C.P.J. “The Mexican state is completely unprepared and ill-equipped to deal with this problem, and there’s also a lack of political will from the Mexican government to adequately protect journalists and combat impunity.”

In the video, a masked man who identifies himself as Rubén Oseguera Cervantes, also known as El Mencho, accuses Milenio of being biased in its coverage of the conflict between the Jalisco cartel and local vigilante groups in Michoacán state, west of Mexico City. He is surrounded in the video by several masked gunmen.

“I’m not against freedom of expression, but I am against whoever attacks me directly,” the man says, before threatening Ms. Uresti directly. “I assure you that wherever you are, I will find you and I will make you eat your words, even if they accuse me of femicide.”

Ms. Uresti said she would not back down from her professional responsibilities despite the threat, thanking the authorities and colleagues for their support: “We will continue doing our job as we have done until now,” she said during her radio program on Radio Formula station.

The video was swiftly condemned by leaders across the political spectrum, as well as journalists and media figures across the country: A letter signed by more than a dozen media groups circulated online on Monday, calling for authorities to arrest those making such threats.

“We energetically reject the threats that our colleagues have been subjected to,” the letter reads, while also offering a thinly veiled jab at Mr. López Obrador and his promise to transform Mexican social and political life on a scale comparable to independence from Spain in the early 19th century and the Mexican revolution of the early 20th. “We are convinced that the transformation that is desired for the country cannot be achieved if freedom of expression is threatened.”

Mr. López Obrador, who holds a two-hour news conference almost every morning, has increasingly used his platform to attack the press for coverage he views as unfavorable, even singling out specific journalists for their work.

In June, the president launched a weekly segment of his press briefings called “Who’s Who in Lies of the Week,” during which news articles and journalists are publicly derided as being unfair or biased toward the government.

While not linked directly to criminal violence against the press, such attacks heighten the risks faced by journalists in Mexico and erode confidence in media outlets and the coverage they provide, advocacy groups and analysts say.

“It does create an atmosphere in which the public may be much less sensitive to the scope and the gravity, the severity of the problem,” Mr. Hootsen said. “I’m glad the president spoke out about,” the threat to Ms. Uresti, he added, but “I wish he would be more consistent in doing so and a little bit more empathetic toward the press.”