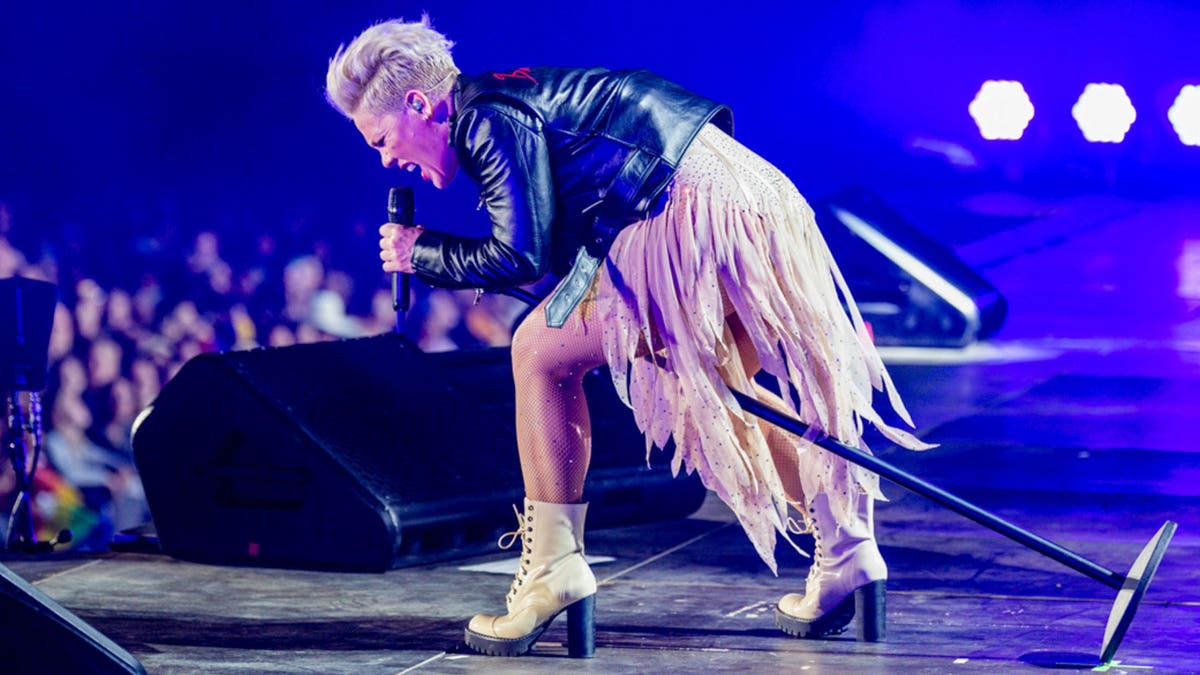 It’s been 21 years since Pink released her debut single. Since then, the singer, whose real name is Alecia Moore, has won a slew of awards, sold over 60 million albums equivalents worldwide, and continues to sell out arenas around the world.

Her most recent set of shows, the record-breaking Beautiful Trauma world tour, is the frame that the documentary Pink: All I Know So Far hangs on.

Directed by Michael Gracey, it’s a frank and intimate portrait of the singer, her work, and family, blending behind-the-scenes and footage shot on the road and things from Pink’s archive. I caught up with the filmmaker to discuss the documentary’s all-access approach and why he might not be done telling Pink’s story.

Simon Thompson: I was surprised about honest this documentary was. All I Know So Far is Pink’s life as it happens, and everything is out there. Did that surprise you?

Michael Gracey: I worked with Pink a little bit ahead of this and so what I did know was that she didn’t separate her professional life and personal life. It’s all in. I found that a fascinating thing to capture. This is someone juggling being a mother and being a rock star, so I knew that there would be a comfort level that she would have in allowing me into what was a very personal and private life. We filmed her and her kids, and they would literally fall asleep, and then we would walk out of the room. The fact that she gave us that level of access was really special. At the same time, we’d just be driving in the car from the hotel to rehearsal or something, and she would say these things that would stay with me, these profound statements like a comment about the moment you realize your parents aren’t perfect. When she said that, I was just like, ‘Whoa!’ I had hoped that we would get these moments because we had this level of access, and we did. We never did that formal thing of sitting down and doing an interview. We were rolling the whole time. I think that’s why there is an intimacy and honesty to it.

Thompson: I was expecting Pink, and I got Alecia, someone who seems to genuinely care about everything from her kids to the value for money people get from a ticket to her shows.

Gracey: That was a nice moment when she said, ‘If I paid for a ticket tonight, I’d be disappointed,’ when she’s been up on that stage belting it out for two hours. What’s interesting about Pink is that she’s very consistent. If you listen to interviews, the things she said when she was 18 or 19 are the same things that she still says today. She still cares about and values the same things. That’s not normal. Forget about people in the public eye, we all evolve and have different thoughts and change our opinions and views, but she’s always had such a strong sense of self. You can see that there are people on her tour who have worked with her for over 20 years. That is really telling. Many of these people could go and work with anyone, but you’ve chosen to stay part of this family. It really is a family. They go out and spend their days off together, and there’s not this separation of ‘I’m the star, and you’re the crew.’ It’s all in.

Thompson: One thing that struck me about this is people think touring and being a rock star is glamorous, but about 90 percent of it is boring. You’re either rehearsing or traveling or in a hotel or on stage, and it repeats. How did you make that reality interesting? Were you worried about that?

Gracey: I’d seen how she dealt with being a mother and being a rock star, so I knew that would be fascinating. On tour, it’s the pace that gives you what you need, the excitement and energy of being in a new city; Pink wants to take her kids out and show them these places, to experience them out in the streets; it’s that vibrancy and passion. On top of that, we did have to race back to rehearsal because if she was performing that night, there was the soundcheck to do then the show, so that energy stopped it from getting boring. The pace at which Pink operates is exhausting. I was shooting, and David Spearing, this incredible director and cinematographer, was also filming. I have to confess that there are some shots where there’s an amazing moment, but I’m nodding off. I was just so tired. Thank God there was another camera in the room to get it. My dipping shot would not have held up. I think everyone has the delusion that touring or filmmaking, being on set is glamorous and, as you say, it’s not. The family aspect gives the documentary this second narrative. Watching Pink performing on stage makes you think, ‘It would have been great if I’d have been there.’ As amazing as her voice is, as amazing as the show is, you’re watching someone performing on stage. What I get is Willow under the stage running with her mum as she transitions from one side of the stage to the other underneath it. Her daughter knows every cue in every song, where her mother will be above her and when, and then she races with her to the next point. There’s a moment where Pink is on a hydraulic lift under the stage. As it is about to go up, Willow tells her mum that he loves her, and Pink disappears towards the stage. All by herself and not performing to anyone, Willow sings along with her. I’m on a super long lens, and I caught that. That is something you don’t get on the night as an audience member. It’s a real peek behind the curtain.

Thompson: I have been a fan of Pink’s work since the beginning, and I think sometimes we forget that she has been having hits for 21 years. Her debut single, There You Go, was a hit back in February 2000. Pink has never gone away, and not many artists can say that. Would you agree we don’t give Pink and her success enough respect?

Gracey: Yeah, I do agree. Her catalog of work, every song she sings, you think, ‘I know this one!’ They are not songs from just the last three years; these are songs from the previous 20 years of her life. I think Pink will still be around in another decade doing the same thing. At some point, I think the world will look back and go, ‘Wow.’ 10 years ago, this was a remarkable career. To still be doing it, at this level, another decade later is incredible. These tunes get stuck in your head and have this powerful message, she’s singing about things that she’s going through in her personal life, and I think that’s why it continues to resonate and connect with people.

Thompson: All I Know So Far is a fascinating and enlightening documentary. What it made me realize, listening to Pink’s lyrics and hearing Alecia talk, is that there is a brilliant narrative dramatic movie in there. Have you guys had discussions about maybe working together again and doing something like that? Maybe a Rocketman-esque biopic or even a Broadway musical?

Gracey:  That would definitely work. We have a fantastic collaboration whenever we get together. All I Know So Far was the third time, and every time is a joy. She’s just someone I creatively clicked with the first time I met her, which was her coming in actually to sing A Million Dreams on the reimagined album for The Greatest Showman. There’s no doubt there is an incredible story there, but I guess the question to ask is, ‘When do you tell it?’ Do you tell it now or in five years or ten years? The impact of her music and the stories that she has to tell, I’m sure that will go on and on. I think that there is definitely an amazing story that will one day get told.

Thompson: The correct answer is that you do it now, and then you do a sequel. Everyone loves the sequel, Michael.

Gracey: [Laughs] You are right. Everyone does love a sequel.

Pink: All I Know So Far is available globally from Friday, May 21, 2021, exclusively on Prime Video.