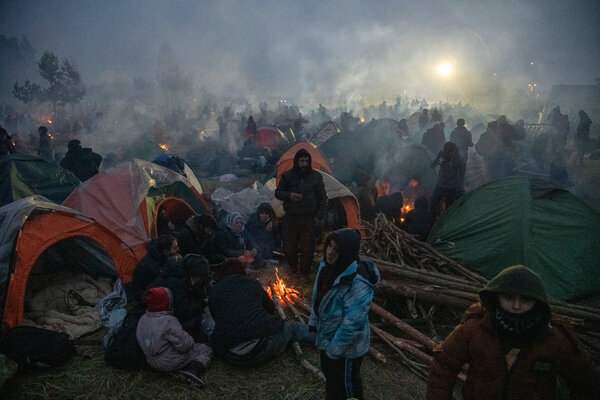 BRUZGI, Belarus — The Belarusian authorities moved Wednesday to ease pressure along the country’s frontier with Poland, the morning after the main border crossing erupted in violence — with desperate migrants hurling stones at Polish border guards who responded with tear gas and blasts from water cannons.

Hundreds of migrants are now being sheltered in a sprawling red brick warehouse a few hundred yards from the border crossing, a much needed bit of relief for scores of families who have spent weeks camped in freezing and fetid fields with little more than the clothes on their backs.

Western officials have called the migrant crisis a “hybrid war” engineered by the Belarusian leader, Aleksandr G. Lukashenko, to punish Poland for sheltering some of his most outspoken opponents and to pressure the European Union into lifting sanctions on his country.

But if it is a battle where migrants are used as pawns, it is also an information war. On Wednesday, the Belarusians sought to portray themselves as the humanitarians.

Reporters from international news organizations, including The New York Times, were invited to witness the squalor and desperation at the border. Belarus officials insist that the humanitarian catastrophe has been created by the European Union’s refusal to abide by international law and give people fleeing war and despair the right to at least apply for asylum once they enter Poland, a member of the bloc.

Poland, eager to keep despair out of the public eye, has sealed off its side of the border, barring aid workers, journalists and even doctors. On Tuesday, hundreds of migrants tried to rush into Poland. Polish border forces used water cannons and tear gas to drive them back.

After the melee, the nationalist governing party in Poland sought to portray it as a great victory.

“Thank you to the soldiers for stopping today’s assault,” Mariusz Blaszczak, the minister of defense, tweeted on Tuesday. “Poland is still safe. All soldiers currently serving on the border will receive special financial rewards.”

He said that while the pressure at the main crossing eased overnight, there were attempts to cross at multiple other points along the 250-mile border.

“The situation at the Belarusian border will not be resolved quickly,” the defense minister said on Wednesday in an interview with the Polish Radio One, the national broadcaster. “We have to prepare for months, if not years.”

The total number of migrants at the border is estimated between 2,000 and 4,000, many of them from Syria, Iraq and other parts of the Middle East. Poland has now deployed more than 15,000 soldiers, joining scores of border guards and police officers.

Across the border, the number of Belarusian security forces deployed has not been made public. But scores stood guard outside the warehouse, their faces covered by black balaclavas. As the crisis escalated, migrants reported being beaten by Belarusian soldiers and being directed to different areas along the Polish border.

Even as hundreds of people were grateful for a warm meal and children were given milk and juice, many in the warehouses voiced uncertainty about what would happen next.

Balia Ahmed, 31, was in the warehouse with two children — 8 and 10 — and her husband. She said she was very nervous about being there for fear of being deported, but felt she had no other choice.

“My kids were freezing and about to die,” she said.

The green light in the window was easy to spot from the main road in Michalowo, a Polish town some 15 miles from the Belarusian border, in an area that in recent months saw thousands of asylum seekers trapped on their way to the European Union.

“It means that my house is a safe place for migrants to ask for help,” said Maria Ancipuk, a resident and the head of the City Council.

Ms. Ancipuk felt she had to act after a news report of a group of Yazidi children who were pushed back by border guards from her town into the freezing forest on the Belarusian side. “You just don’t forget such things,” she said, her voice trembling and her eyes full of tears. “I told myself: I will do everything so it would not happen here again.”

The European Union has accused the dictator of Belarus, Aleksandr G. Lukashenko, of funneling asylum seekers from the Middle East through his country into Poland, as a retaliation against sanctions imposed by the bloc on his regime after the disputed 2020 election and the following crackdown of the opposition.

As the standoff escalated in recent days, with clashes between the Polish authorities and migrants incited by the Belarusian police to breach the heavily guarded frontier, those caught in the middle have had to count on support from an unofficial network of local residents, activists from all over Poland and volunteer medics spread across the border area.

Only those who manage to lodge an asylum application receive some form of state support. Help from locals is even more crucial inside a two-mile-wide buffer zone surrounding the border, which has been closed off by the Polish authorities to all nonresidents, including journalists, doctors and charities.

But most helpers prefer not to publicize their activities. “There are only a few of us that are actively helping,” said Roman, a resident who asked to be identified by only his first name for fear of repercussions from the authorities and local far-right groups. “The majority remains silent.”

So far, putting out green lights as a sign for migrants has been largely symbolic, with very few of them aware of it. But it is as much a symbol for asylum seekers as it is for her neighbors, Ms Ancipuk said.

“People are scared of doing it,” said Ms. Ancipuk. “As soon as I put the light in my window, I started getting hate messages,” she said. “But I won’t be intimidated.”

Thousands of migrants, mostly from the Middle East, have traveled to Belarus in hopes of reaching the European Union, but have been prevented by Poland and Lithuania, E.U. member countries, from entering. They are camped along the border with Poland, stranded in the bitter cold.