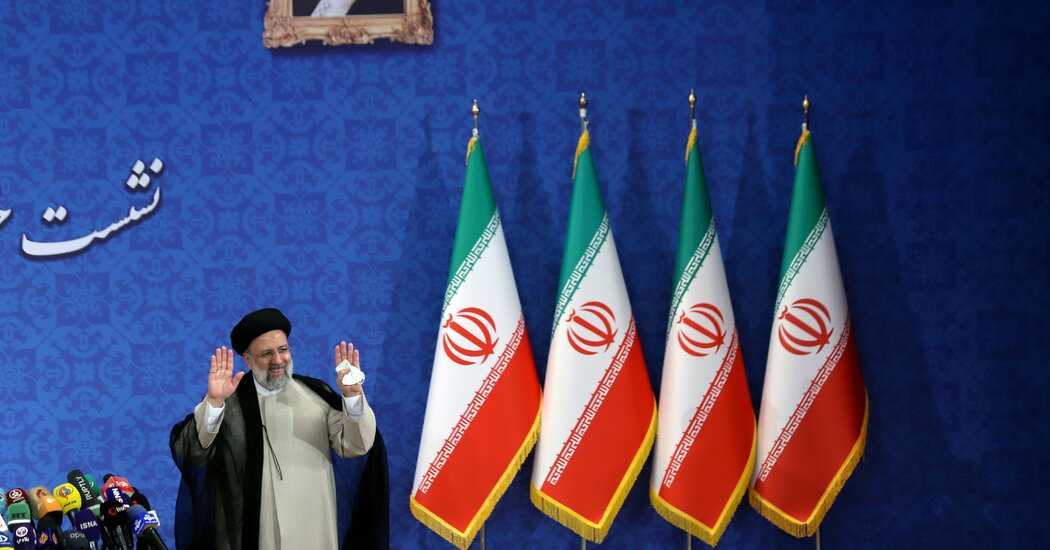 He was a 28-year-old student and member of a communist group in Iran serving a 10-year prison sentence in 1988 when, according to his family, he was called before a committee and executed without a trial or defense.

Family members said they did not get the body, a will or the location of a burial site. They received a duffle bag with a wristwatch, a shirt and a certificate that did not specify execution as the cause of death.

The student, Bijan Bazargan, was among an estimated 5,000 prisoners belonging to armed opposition and leftist groups in Iran, who Amnesty International and other rights groups say were executed in the summer of 1988.

Now, a Swedish court will prosecute a former Iranian judiciary official for war crimes and murder in connection with Mr. Bazargan’s death. The case carries some notably public and damaging implications for Iran’s president-elect, Ebrahim Raisi, who helped decide which prisoners lived or died during those mass executions.

The defendant, Hamid Noury, 59, was indicted on Tuesday in Sweden, under what is known as the principle of universal jurisdiction, a tenet of international law that theoretically allows any national court to pass judgment on defendants in egregious crimes regardless where they have been committed.

His trial begins on Aug. 10 — less than a week after Mr. Raisi takes office nearly 3,000 miles away in Tehran. The trial, which is expected to last until next April, risks exposing new details about Mr. Raisi’s role — a period of history that he has sought to minimize or ignore.

Mr. Noury served as an assistant to the deputy prosecutor at the Gohardasht prison where Mr. Bazargan and hundreds of prisoners were sent to the gallows.

The mass executions represent one of the most brutal and opaque crackdowns by the Islamic Republic against its opponents. International rights groups say they amount to crimes against humanity.

“Some people tell us to forgive and forget, but we can’t,” said Laleh Bazargan, Mr. Bazargan’s sister, a 51-year-old pharmacist who migrated to Sweden and lives in Stockholm. “The truth must come out, for the sake of closure and for accountability.”

Mr. Raisi, 60, was a member of the four-person committee that interrogated prisoners and issued execution orders. Mr. Raisi has said he was acting under the direction of the founding father of the revolution, Ayatollah Ruhollah Khomeini, who had ordered a committee be formed to facilitate the executions.

Allegations of Mr. Raisi’s work on that committee have shadowed him through his ascent in Iran’s hierarchy, where he had been the head of the judiciary before the June election that vaulted him to the presidency. Amnesty International has called for a formal investigation of Mr. Raisi’s past.

Although Mr. Raisi will enjoy diplomatic immunity if he travels abroad as the country’s president, the Sweden case could, at the very least, confront him with a vexing optics problem as he sets to engage with the world.

The United States, which placed Mr. Raisi on a sanctions list two years ago for rights abuses, is obliged to grant him a visa as host country of the United Nations should he wish to attend the General Assembly in New York this September. Even so, six Republican senators asked President Biden to deny Mr. Raisi and other top Iranian officials visas for that gathering, the world’s biggest diplomatic stage.

Iran’s Mission to the United Nations said through a spokesman that it had no comment about the trial in Sweden and that Mr. Raisi’s travel plans for the General Assembly remain unclear because of the Covid-19 pandemic. But Mr. Raisi is scheduled to speak at the event, either in person or virtually.

The case against Mr. Nouri appeared to make him the first Iranian defendant in a criminal prosecution that invokes the principle of universal jurisdiction. Iranian officials and operatives have been convicted in Germany, France and most recently Belgium for assassinations and terrorism-related plots inside those countries — but never for crimes committed inside Iran, legal experts said.

“The trial is extremely important for breaking the cycle of impunity from Iran to elsewhere for officials accused of serious human rights violations,” said Shadi Sadr, a prominent human rights lawyer in London.

In announcing the charges against Mr. Noury, Sweden’s public prosecutor, Kristina Lindhoff Carleson, said that the “extensive investigation resulting in this indictment shows that even though these acts were committed beyond Sweden’s territory and more than three decades ago, they can be subject to legal proceedings in Sweden,.”

The prosecutor’s statement said the defendant was suspected of having participated in the mass executions, intentionally taking the lives of prisoners and subjecting them to torture and inhumane treatment. Such actions, Swedish authorities said, violated the Geneva Conventions.

The prisoners were mostly members of an armed opposition group, the Mujahedeen Khalq, now widely known as the M.E.K., and leftist political groups. Human rights activists have said most of the executed prisoners had not been convicted of capital crimes and had been serving prison sentences.

Mr. Noury was arrested at Stockholm’s airport when he arrived to visit family in 2019. Activists had learned of his travel plans and had alerted the authorities, who denied him bail. They began an investigation, interviewing dozens of victims’ family members, survivors and Iranian human rights activists who had for years recorded testimonies and details of the mass executions.

Mr. Noury’s lawyer has told Swedish media that he denies the accusations and that the authorities arrested the wrong man.

The Abdorrahman Boroumand Foundation, a Washington-based Iran rights advocacy group named after a pro-democracy Iranian lawyer assassinated in 1991, published a report in 2010 on the 1988 mass executions. The report was prepared by a British lawyer who was the head of an international tribunal on Sierra Leone’s civil war.

Roya Boroumand, a daughter of Mr. Boroumand’s who is executive director of the foundation, said its subsequent investigation showed that Mr. Noury, known by the alias Hamid Abbasi, had been the right-hand man for the deputy prosecutor of the Gohardasht prison.

She said Mr. Noury and others like him had played an active role in questioning prisoners, preparing the list of names for the so-called death committee, and then escorting listed prisoners from their cells blindfolded down a dark hallway to a room where the committee members, which included Mr. Raisi, interrogated them.

The committee asked the prisoners about their political beliefs and willingness to condemn comrades and express fealty to the Islamic Republic. The committee often made an on-the-spot decision on whether the prisoners lived, Ms. Boroumand said.

“The significance of the Sweden case is not about a person, it’s about the Islamic Republic being put on trial,” said Ms. Boroumand. “It’s coming back to haunt them and hopefully it will prevent repetition of such crimes.”

The mass executions took place in Tehran’s Evin prison and in Gohardasht prison in Karaj, about 12 miles west of Tehran. In Gohardasht, the condemned were hanged on pipes at an adjacent area known as Hosseiniyeh, which is typically used for religious ceremonies and prayers. The bodies were buried in mass graves in secret locations.

About 30 plaintiffs, including Mr. Bazargan’s sister, are expected to testify against Mr. Noury at the trial in Sweden.

Ms. Bazargan said she thinks of her brother every day. She was 13 when he was arrested at 23 and had been allowed to visit him once a year until his execution five years later.

In an interview, she recalled him as a protective and caring older brother, taking her to the movies and restaurants, giving her advice about school and friends.

For many years, Ms. Bazargan said, she had imagined what she would say if brought face-to-face with one of the people suspected of responsibility for executing him.

That day is now scheduled for Oct. 19 in a courtroom in Stockholm.