Must This Swab Go That Far Up Your Nose to Test for Covid? 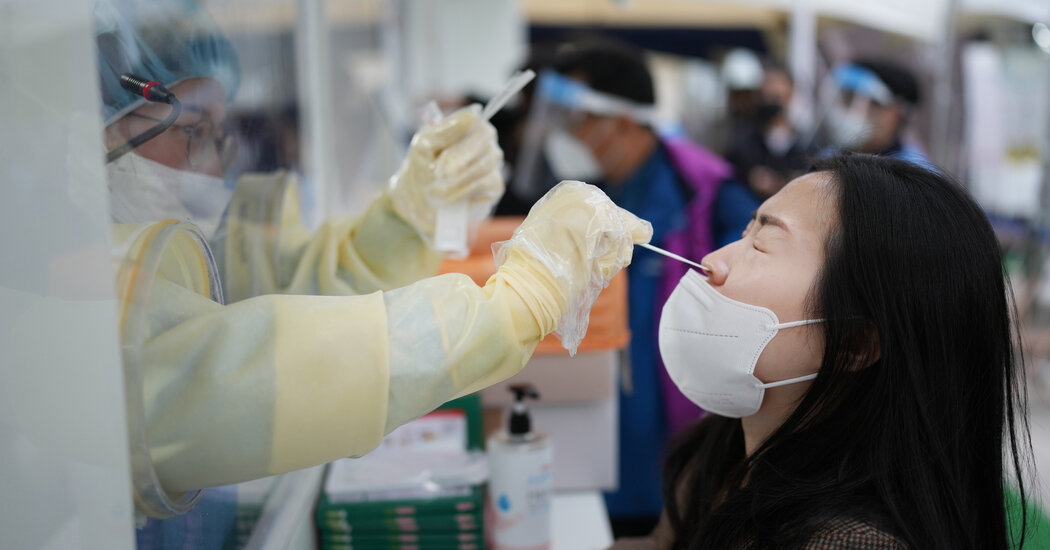 One Canadian said it felt like a painful poke to his brain. An American heard crunching sounds in her head. A Frenchwoman suffered a severe nosebleed. Others got headaches, cried or were left in shock.

They were all tested for Covid-19 with deep nasal swabs. While many people have no complaints about their experience, for some, the swab test — a vital tool in the global battle against the coronavirus — engenders visceral dislike, severe squirming or buckled knees.

“It felt like someone was going right into the reset button of my brain to switch something over,” Paul Chin, a music producer and DJ in Toronto, said of his nasal swab test. “There’s truly nothing like it.”

“Oh, my goodness,” he continued, “the swab just going farther back into my nose than I’d ever imagined or would have guessed — it’s such a long and sharp and pointy kind of thing.”

Since the coronavirus emerged, millions of swabs have been stuck into millions of noses to test for a pernicious virus that has killed millions across the planet. One of the ways to fight the virus, officials say, is to test widely and to test often. The imperative has been to use a test that people are willing to take repeatedly.

The swab generally fits the bill.

In some parts of the United States, health workers hand people the swab to test themselves, assuring a level of personal comfort. To many South Africans, the only Covid-19 test is a painful one — you see stars or gag because a nasal swab goes down your throat.

The range of swabbing raises questions: Who is doing it right? How deeply should the swab slide into your nostril? How long should it spend up there? Does an accurate test have to be uncomfortable? Unfairly or not, some countries have reputations for brutal tests.

First, a brief anatomy lesson: No, the swab is not actually stabbing your brain.

The swab traverses a dark passage that leads to the nasal cavity. That is enclosed by bone covered in soft, sensitive tissue. At the back of this cavity — more or less in line with your earlobe — is your nasopharynx, where the back of your nose meets the top of your throat. It is one of the places where the coronavirus actively replicates, and it is where you are likely to get a good sample of the virus.

Wariness about the test may arise from a simple fact: Most people can’t stand having something shoved so far up their nose. Furthermore, the tests conjure some of our darkest fears: of things that can crawl into our orifices and burrow into our brain.

“People aren’t used to feeling that part of their body,” Dr. Noah Kojima, a resident physician at the University of California, Los Angeles and an expert in infectious diseases, said about swabs touching the nasopharynx.

Pain enters the picture when the swab — a tuft of nylon attached to a lollipop-like stick — is administered at the wrong angle, said Dr. Yuka Manabe, a professor of medicine specializing in infectious diseases at Johns Hopkins University School of Medicine.

“If you don’t tip your head back, you don’t get to the throat,” she said. “You’re smashing into someone’s bone.”

Mr. Chin, the music producer, described his test as a “brain poke” and compared the burning sensation to the effects of breathing in spice.

“Your whole face is kind of ready to leak,” he said, adding, “I don’t really know that there’s any way to be prepared for it.”

There are three main kinds of Covid nasal swab tests: nasopharyngeal (the deepest), mid-turbinate (the middle) and anterior nares (the shallow part of your nose). Early in the pandemic, the deep nose swab was administered widely and aggressively to adults because the method worked when testing for influenza and SARS. Though the science is evolving, experts tend to agree that the deepest swab is the most accurate.

According to a review of studies published in July in PLOS One, a science journal, nasopharyngeal swabs are 98 percent accurate; shallow swabs are 82 percent to 88 percent effective; mid-turbinate swabs perform similarly.

“Depending on the skill of the medical staff, it may or may not hurt,” he said. But he said: “The nasopharyngeal test is the most accurate. That’s why we keep doing them.”

The W.H.O. has guidelines about how best to test; complications have been rare. Australian guidelines say swabs should go a few centimeters up adult nostrils. The U.S. Centers for Disease Control and Prevention says the mid-turbinate swab should usually be inserted less than an inch, or until it meets resistance.

The K.D.C.A.’s guidelines allow testers some leeway on how to scrape the nasopharynx (wiggling or spinning the swab, or both). Mr. Choi said the experience depends on the brand of swab, the patient’s pain tolerance, the anatomical structure of the nasal cavity and the tester’s proficiency.

But walking out of a clinic in Seoul in November, some people were sneezing, rubbing their eyes or blowing their noses. One or two were crying.

“It felt like the swab was scraping my brain,” said Chu Yumi, 19.

Lee Eunju and Lee Jumi, both 16, said they never wanted to get nasal swabs again. Eunju said it felt as if chili powder had been dumped down her nostrils. Jumi said, “It hurt so much.”

Dr. Lee says the discomfort is a trade-off for accuracy. “This does not mean we can ignore the pain that each patient feels,” he said.

Some people chalk up their experiences to testers’ technique or their personalities.

“It stings, it’s a little uncomfortable, but I think the person was very gentle,” said Kim Soon Ok, 65, outside a clinic in Seoul.

Issa Ba, a 31-year-old soccer player, recalled: “I had my Covid-19 test in Conakry, Guinea, in August before I came to Senegal. I felt a little pain when they put the stick in my nose, but it was not that bad. And I have endured much more intense pain. I am a man.”

Some countries aim to standardize the tests and remove human error. Developers in Denmark, Japan, Singapore and Taiwan invented robots to do the job.

Dr. Manabe, of Johns Hopkins, insists the swabbing should not hurt.

Women often report worse pain than men, studies show, but this could be because of a design bias: Some swabs may be too large for a woman’s facial anatomy.

Briana Mohler, 28, suffered a nose swabbing in Minnesota in 2020 so excruciating that she could “hear crunching.”

Audrey Benattar, who recently moved back to Marseille, France, recalled her trip to a Montreal hospital in May to give birth. There, a nasal Covid swab left her with burst blood vessels and balloon catheters in both nostrils to stem the bleeding.

Some argue that nose swabs rank relatively low on the scale of squeamish coronavirus tests.