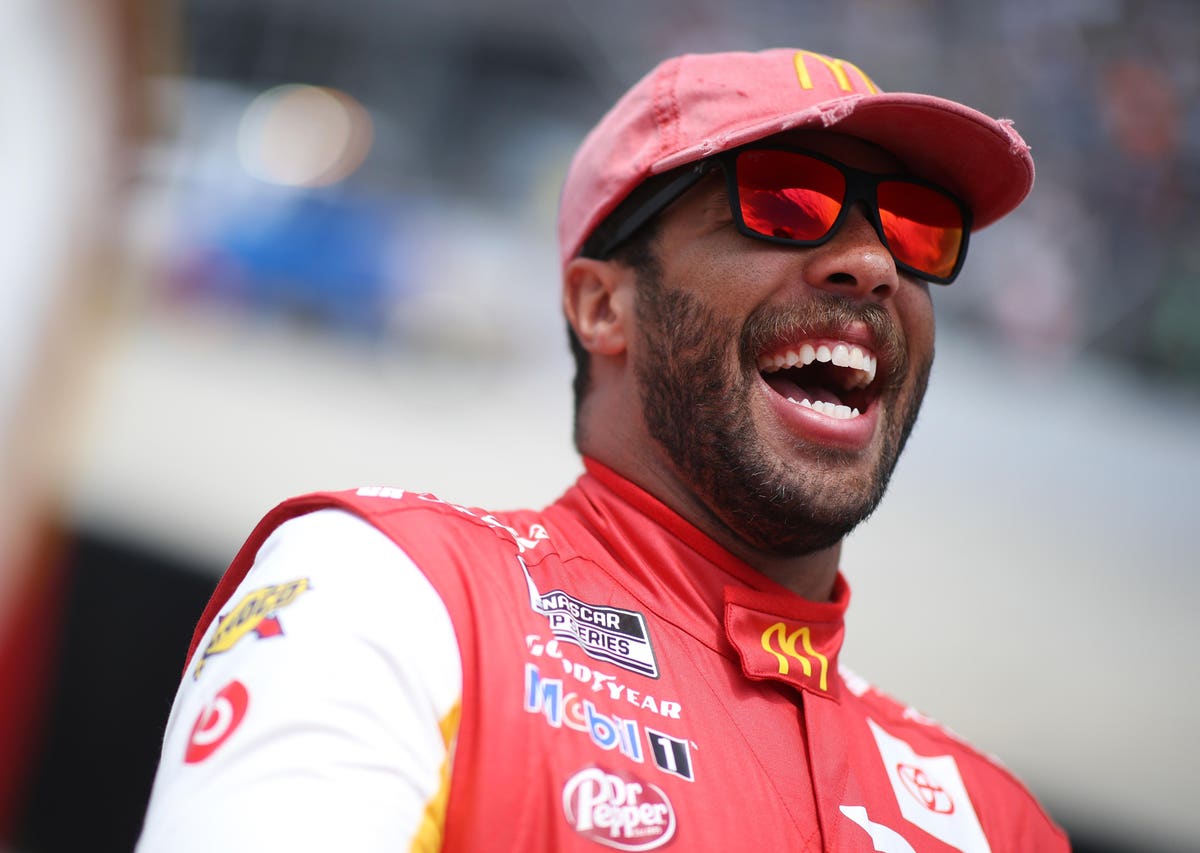 Bubba Wallace is about a quarter of the way through his first season, not only with a new team, but with a team that’s new. The popular Nascar driver is one busy guy.

Thirteen races into the season Wallace feels the new team is a little above average at this point.

“I’ll give it a right at a, B a B plus at times B minus at times,” he said when asked to grade his season to date. “You know, I’m just trying to put everything together.

“It seems like we were on that trend this weekend, getting our best finish at Dover, which was really good for us. Finishing 11th there almost got 10th.”

He points out however, that there’s a long season still to go.

“Can’t get held up on one race. You got to keep going and keep moving.”

Wallace said he hasn’t set any sort of benchmarks for himself or the team for the first season. Instead, he likes to keep it simple.

“We just race to race,” Wallace said. “Each and every race is different and new opportunity for us. So many unknowns with so much newness to a new team; trying to put everything together and make it all happen.

There is a great deal that goes into any new race team. Not just equipment, but crewmembers, a shop and all the road equipment needed to put the cars on the track each week. All of that takes money. Sponsors are the ones paying the checks; without them there would be no new equipment, crewmembers, shop or even a way to get to the track.

Obtaining sponsorship in Nascar has been challenging the last few years. Not so for Bubba Wallace and the 23XI team, however. While it helps to have high profile owners like Michael Jordan, few could argue that the big draw is the driver, Bubba Wallace. And not necessarily for what he’s done on the track.

Wallace was thrust into the spotlight last season during Nascar’s pandemic ravaged season. Only days after the sport returned to the track, with the bizarre sight of empty grandstands as a backdrop, the real world intruded into Nascar.

Protests erupted across America after George Floyd, a Black man, died in police custody. America began to have a reckoning with its racist past. And Nascar soon followed.

Wallace is the sports lone Black driver. Up until last year he always let his driving on the track do the talking. But last season when Nascar got to Atlanta shortly after Floyd’s death, Wallace wore a “I Can’t Breathe” t-shirt, a reference to the words Floyd spoke before he died.

Wallace was thrust into the spotlight and found his voice. A week after Atlanta he was interviewed on National TV saying it was time that Nascar banned the Confederate flag. Nascar listened and did just that.

A misunderstanding prior to the race at Talladega a few weeks later demonstrated just how far the sport had come in such a short time. In a show of unity, all the drivers in attendance, along with this then boss Richard Petty who had flown in that morning, pushed Wallace’s car to the front of the grid then gathered during the pre-race invocation and singing of the National Anthem. It was a moment widely seen across mainstream media throughout the world.

Wallace’s social activeness not only helped the sport move closer towards inclusiveness than it’s ever been, as fans were able to return to the track, scattered among them were plenty, Black and white, rooting for Bubba Wallace. NFL stars like Alvin Kamara were attracted to the sport with Kamara partnering with JD Motorsports; Jordan announced his co-ownership of 23XI Racing and Cuban American entertainer Pitbull became co-owner of another new team, Trackhouse Racing.

There was another unintended consequence as well as sponsors were also eager to come along for the ride. Many were new to the sport, and many came knocking on Wallace’s door.

“I’ve been racing for 17, 18 years going on and it took 17 years to get a sponsor, basically,” Wallace said. “Now we’ve had sponsors along the way, don’t get me wrong, but to be in the financial situation that we’re in, you know, life is good.”

“You don’t have to worry about what’s going to be on the car or if we’re going to compete at the next race. You know, the funding is there and, and it’s awesome to have brands that want to partner with us and our team and everything that we have going here at 23XI Racing.”

Indeed, it seems that every week the 23XI team is announcing a new sponsor for Wallace and this past week was no different. DraftKings, a digital sports entertainment and gaming company, announced it will partner with Wallace. The sponsorship debuts this weekend at the Circuit of the Americas with an associate sponsorship that will run the rest of the season and includes primary sponsorship on the car at Pocono Raceway in June.

It’s yet another example of how Wallace’s social activism is attracting corporations who are more than willing to open the checkbook.

“Beyond the brand and product integrations of this deal,” Ezra Kucharz, chief business officer at DraftKings said. “We also greatly admire Bubba Wallace’s ongoing advocacy for social justice and inclusion, equity and belonging efforts because they align perfectly with our company values.”

Each new sponsor however comes with obligations away from the car. Photo shoots, meet and greets and other sponsor commitments that Wallace must make time for. Wallace doesn’t seem to mind a bit though.

“You know, it’s been good phone lines are, are definitely ringing,” he said. “They want to be a part of this journey. And we have to we have to do our part and give back.”

Wallace wants to continue to give back. Not only continuing to lead the sport in its diversity and inclusion efforts but reap the unintended rewards that come with all the new sponsors those efforts have attracted. Wallace said the key is having the right people to manage his time. He doesn’t feel overworked or overstressed and can meet the obligations and still be able focus on his racing.

“It hasn’t been too bad,” he said. “I’ve obviously been busier than I ever have been in my career, but it’s been a good busy.”