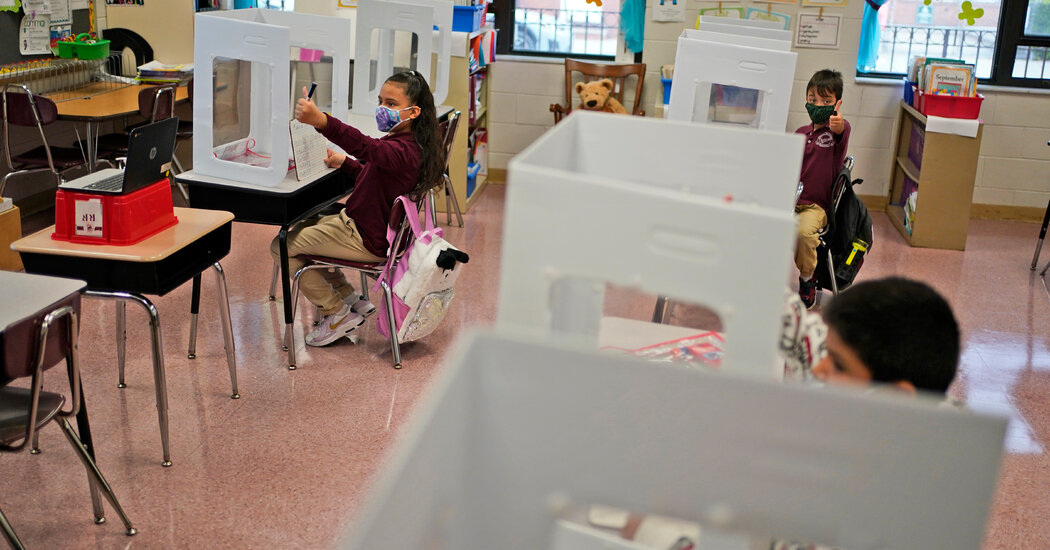 Gov. Philip D. Murphy of New Jersey announced on Friday that in the face of the spreading, highly contagious Delta variant, all students, teachers, staff members and visitors would have to wear masks inside of school buildings when public schools open in a few weeks.

“This is not an announcement that gives any of us or me personally any pleasure,” Mr. Murphy, a Democrat, said, speaking at an elementary school in East Brunswick. “But as the school year approaches and with the numbers rapidly increasing, it is the one that we need to make right now.”

He said the mask mandate would not be permanent and allowed “the same common sense carve-outs that were in place for the last school year, including for students with documented medical conditions or disabilities which make wearing a mask either difficult or dangerous, rigorous activities in gym classes, excessive heat, playing a musical instrument or eating in a classroom or cafeteria.”

The decision, in keeping with federal guidance issued last week, was a shift from Mr. Murphy’s stance in June, when he said that individual districts would decide on masking for themselves. But cases have risen sharply since then in the state, but not to the levels of last year, when New Jersey was an epicenter of the first wave of the pandemic, or its surges in last fall and winter and this spring.

Universal masking has some powerful support in New Jersey. Marie Blistan, who leads the New Jersey Education Association, representing some 200,000 teachers, praised Mr. Murphy’s leadership at the same event, noting “when I see some putting political posturing ahead of the health, the welfare and the well-being of our schools and our students.”

However, some opponents lashed out before Mr. Murphy’s announcement, offering a window on how politically polarizing the issue can be across the United States.

Kelly Lepine Ford, who is a leader of Free NJ Children, a group that is suing to block school mask mandates, asserted that masking was one cause of the sharp rise in mental health crises among children. “Talk to other parents like me and you’ll hear similar experiences of their children struggling with mental health because of these school mandates,” she said in an email.

Jon Bramnick, the minority leader in the New Jersey State Assembly, posted his objections to the mandate on Twitter, focusing narrowly on the lack of legislative hearings involved in the decision. In a phone interview Assemblyman Jon Bramnick said “Everyone should come home from the beach, go straight to Trenton, I’m talking about legislators, and get to work.” The responses to his post, however, turned it into a forum for broader anti-mandate sentiments.

Just a few weeks ago, with new cases, hospitalizations and deaths trending downward in most of the country, elected leaders from both parties were issuing optimistic statements about a triumphant return to normal schooling.

But the furious spread of the highly contagious Delta variant of the virus, coupled with lagging vaccination rates, upended those hopes as cases have jumped across the country.

Some states, like California and Illinois, have statewide mask mandates in schools. New York City will retain its school mask requirement. Atlanta Public Schools reopened this week and are requiring students to wear masks, though the rest of Georgia doesn’t have an order in effect.

But resistance is strong. In some states, Republicans have pushed through laws or signed executive orders banning school officials from imposing mask mandates, leaving it up to parents to decide whether their children should wear masks in class.