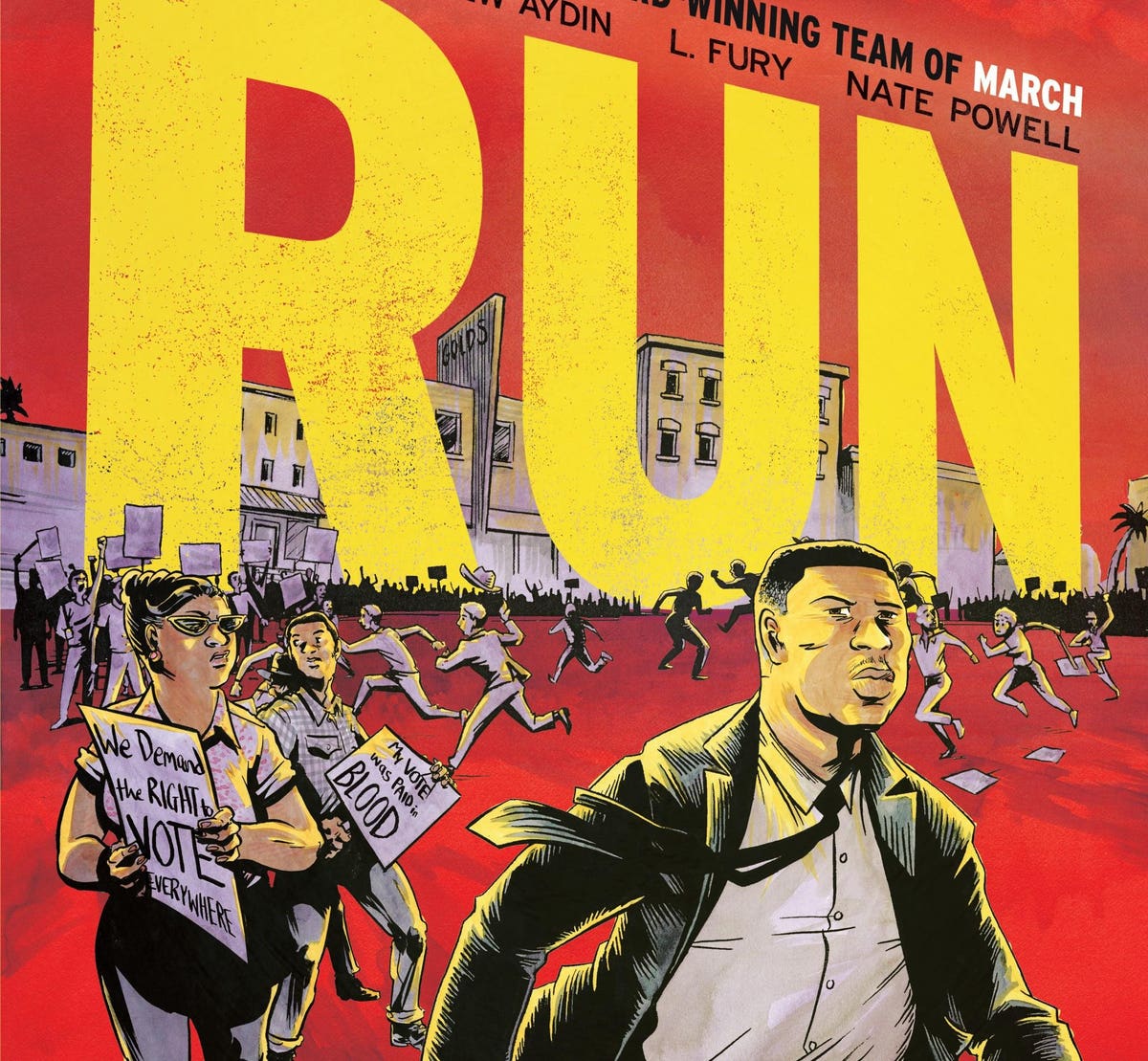 John Lewis was many things: civil rights icon, champion of non-violence, influential Congressman, and also the National Book Award-winning author of a best-selling trilogy of graphic novels (March Books 1-3), looking back on his early years in the movement. He and his collaborators, writer Andrew Aydin and artists Nate Powell and L. Fury, intended to continue his memoir in the same format with a new trilogy called Run, the first volume of which comes out August 3 from Abrams ComicArts. Though Lewis did not live to see its release, the book serves as a reminder that the battles for equality and multiracial democracy that defined his public career remain current events, not history.

Whereas the moral universe of the March trilogy, covering the fight to end legal segregation, was fairly well defined, Run tackles the more complex era following the passage of the Civil Rights Act and the Voting Rights Act in 1965, when the movement began to fragment along questions of ideology and tactics, and opponents became more sophisticated in their efforts to perpetuate white domination. This was a difficult period for the country in general, but also for Lewis personally when he found himself ousted from leadership of the Student Nonviolent Coordinating Committee (SNCC) and in deep disagreement with the more confrontational tactics of the emerging Black Power movement.

Lewis’s co-author, friend and longtime congressional aide Andrew Aydin said that portraying the sincere debates that took place within the broader struggle for justice is important to both history and the current day. “When we look at [any social justice movement], it’s easy to sensationalize the disagreements and show it as fractured when in fact it is normal to have these debates. The most important part is that you have disagreements internally, but then march together for the common purpose. Young people should know that what they’re going through now [in the BLM movement and elsewhere] is very similar to what John Lewis went through in his time.”

He also said that he and Lewis wanted to show the politics of the civil rights era in the context of its time, including how leaders became skeptical of President Johnson over Vietnam and took controversial positions on all kinds of social and political issues. “Most Americans have this idealistic picture of that era that boils down to a few words, I have a dream,” said Aydin. “There’s a tendency to whitewash the legacy of the movement, and I’m very concerned that people are going to water down [Lewis’s] radicalism, his militancy, everything that made him ahead of his time down to his final days in Congress to present this corporate, sanitized version of him.”

Run puts down a clear marker for future historians that is both true to Lewis’s vision and meticulously researched. Aydin’s Good Trouble company, which produced the book for Abrams, took great care to present an accurate account of the history, both narratively and visually. Though Lewis relied on his own recollections for the basic framework, Aydin and his associates combed over archives, including contemporary reports from Black newspapers in the South that have not shown up as sources in other accounts. They also conducted interviews with surviving participants and voluminous visual research on the physical locations to give readers an accurate sense of time and place. Their entire process is detailed in over 50 pages of notes and end-matter included in the Abrams edition.

“Doing non-fiction graphic novels requires a different kind of scholarship,” said Aydin. “It’s difficult because you have to work in multiple dimensions, and having to do this as a team with other people rather than just sitting in a room collecting information to put words on a page. We’re creating a new methodology, a new academic standard for how these books are done.”

Because non-fiction graphic novels for middle grade and young adult readers are such a hot category in publishing, some publishers shortchange the artwork in the name of getting the book out quickly, or because they lack the editorial experience of working in the comics medium. That is not a problem with Run, which shows the experience of Aydin and his team as visual storytellers and the strength of Abrams ComicArts as a “comics-native” literary imprint in supporting this kind of work. Artist L. Fury took up the reins from March illustrator Nate Powell (who drew the cover and some incidental material in Run) after Lewis saw her work and liked how she depicted the subtleties of his emotions and expression. This is the Houston-based cartoonist’s first graphic novel and she showed herself up to the task of bringing the history to life in the medium of comics.

The publication of Run almost exactly a year after Congressman Lewis passed away in the summer of 2020 is bittersweet for Aydin, who regards Lewis as a father figure and takes seriously the responsibility of advancing his legacy.

“The man you saw on stage or in lights that so many other people know, that’s not the person that I remember. On the anniversary of his passing, I saw people tweeting out stories of small moments they remembered, of him being kind to them in a voting line or holding the door for them or speaking to their children. That’s the John Lewis that I try to keep with me, more than anything, because that’s what we forget. Everybody wants to be the hero, with their name in lights, but they forget how hard it is to be a good person in every moment of your life to every person you meet.”

“People forget that John Lewis’s greatest strength was not simply his courage, but his resilience his ability to show that courage after being defeated,” he continued. “And they have to see through his own eyes, through his own life, how many defeats he overcame. When you think about his service, everybody thinks about Selma, but they never think about the young man who at 26 years of age submits his resignation in protest essentially of people undermining Dr King. That he’s willing to leave this organization that was his family and his home. And how that that moral decision that moral clarity led him into public service. That’s so misunderstood today, but I think it’s such a shining light.”

Six months after his death, on January 5, Lewis’s lifelong goal of a multiracial democracy triumphing in his home state of Georgia was realized with the election of Senators Warnock and Ossoff. Then a day later, the nightmare that he fought against at great personal cost, public protests against the government turning to violence, reminded us all again of the urgency of both his vision and his approach.

“For all those young people out there, right now, myself included, who are frustrated who feel like our nation is in danger, who feel like they don’t have a path or a way to help, this book shows them: First you march, then you run,” said Aydin. “And if you’ve been out marching if you’ve been out protesting, that’s not where your service to your country stops. You have to get involved in public service, in politics, because it’s one thing to be able to vote; it’s a whole other to have good people to vote for. We need a lot more good people to vote for in this country right now.”