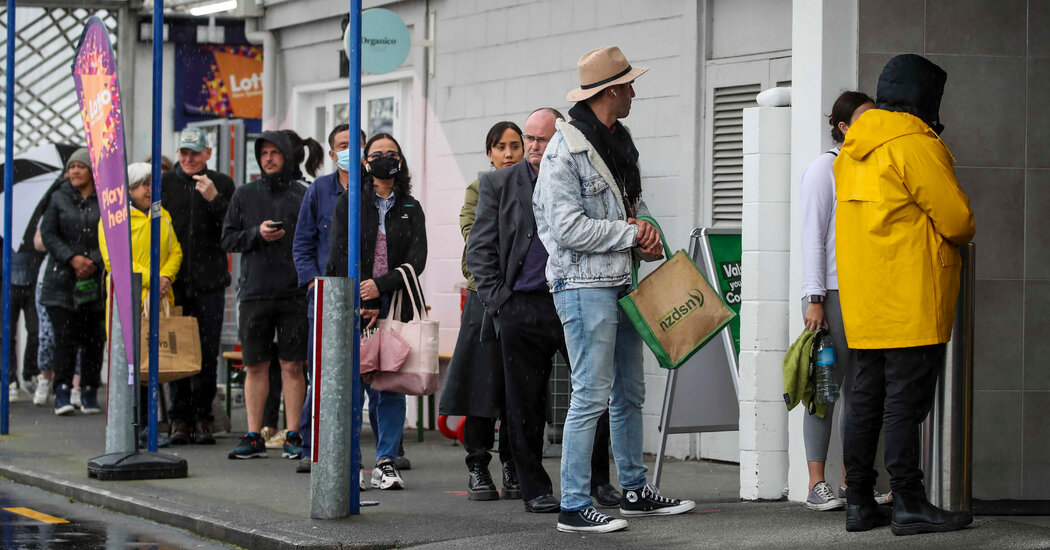 The snap lockdown, which starts at 11:59 p.m. local time, was set off by the discovery of an infection in Auckland, New Zealand’s most populous city, that is believed to be the country’s first case of the more contagious Delta variant outside its strict quarantine system. Auckland and the nearby Coromandel Peninsula, which the infected person recently visited, will be under a longer, seven-day lockdown.

Under the lockdown rules, New Zealand’s toughest, residents must stay at home and all schools, public facilities and nonessential businesses are closed.

Ahead of Ms. Ardern’s announcement, in scenes reminiscent of the earliest days of the pandemic, New Zealanders ransacked supermarkets, leaving toilet paper aisles bare. Roads out of Auckland were packed as people fled the city for holiday homes in other parts of the country.

“I want to assure New Zealand that we have planned for this eventuality and that we will now be putting in place that plan to contain and stamp out Covid-19 once again,” Ms. Ardern said at a news conference.

“Going hard and early has worked for us before,” she added.

It is not yet known how the individual, who was unvaccinated and does not have any link to the country’s quarantine facilities at the border, contracted the virus.

Ms. Ardern warned that if New Zealand failed to act swiftly, it could end up in the same situation as the Australian state of New South Wales, which is reporting hundreds of new cases each day, more than at any other time during the pandemic. A lockdown now in its eighth week in Sydney, where the Delta-driven outbreak began, was extended to the entire state on Saturday.

“We are one of the last countries in the world to have the Delta variant in our community,” Ms. Ardern said. “This has given us the chance to learn from others.”

The New Zealand government had previously indicated that it would respond to any cases of the Delta variant in the community with stringent lockdowns, in line with the country’s Covid-zero strategy. New Zealand has had among the fewest virus cases in the world, with a total of 2,927 cases and 26 deaths, according to a New York Times database.

Fears of a Delta outbreak in New Zealand have been heightened by the country’s relatively low vaccination rate. According to a New York Times database, 29 percent of New Zealand’s population has received at least one dose of a vaccine, and 17 percent is fully vaccinated.

The campaign is expected to accelerate in the final months of this year, with officials saying last week that all residents over the age of 16 would be able to book appointments starting Sept. 1.