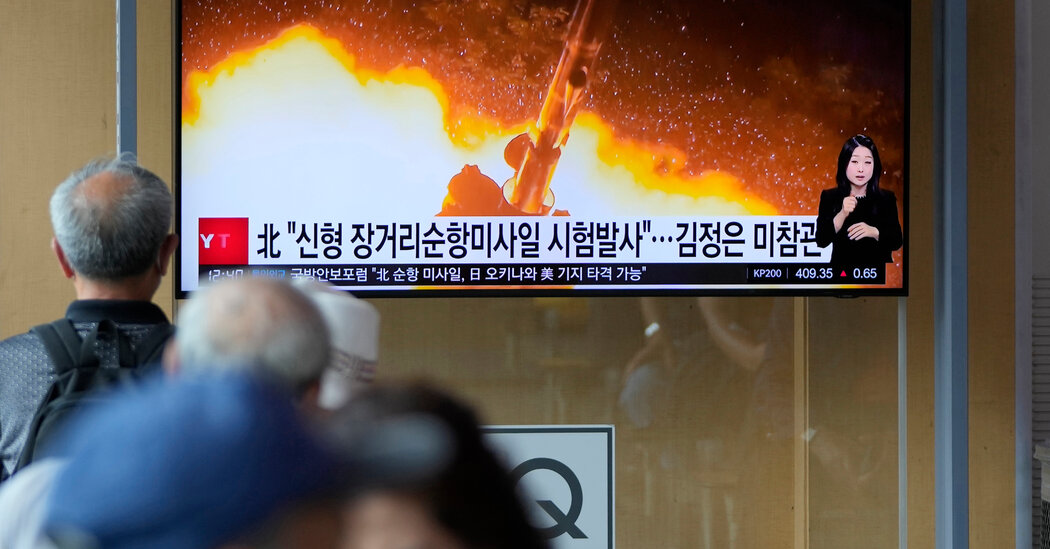 SEOUL — North Korea launched two ballistic missiles off its east coast on Wednesday, the country’s first ballistic missile test in six months and a violation of multiple United Nations Security Council resolutions that ban the country from conducting such tests.

The launch occurred a day after the special envoy from the United States urged North Korea to resume nuclear disarmament talks, saying that Washington had no “hostile” intent toward Pyongyang. North Korea conducted its last ballistic missile test in March. Over the weekend, it test-fired what it called newly developed long-range cruise missiles.

The resumption of missile tests by North Korea came as neighboring countries stepped up efforts to get Pyongyang to return to the negotiating table. North Korea uses weapons tests to both improve its missile technology and increase its leverage with Washington.

South Korean and United States defense officials were analyzing the data collected from the North Korean missile test to determine what type of ballistic missiles were fired on Wednesday and how far they had flown, the South Korean Defense Ministry said in a statement.

Japan’s Ministry of Defense issued a statement saying that an “object that could be a ballistic missile was fired by North Korea,” but that it is “assumed” it did not reach Japan’s territorial waters or its exclusive economic zone.

“It’s not just North Korea, but other countries as well that engage in military activities,” Mr. Wang said when asked by reporters to comment on the North’s weekend cruise-missile test. “We must all work together to resume dialogue. We all hope to contribute to peace and stability on the Korean Peninsula.”

“The United States has no hostile intent toward” North Korea, Sung Kim, the Biden administration’s special envoy, said on Tuesday in Tokyo, where he met with representatives from Japan and South Korea to discuss the North. He said Washington hoped that North Korea “will respond positively to our multiple offers to meet without preconditions.”

The latest tests showed that North Korea continued to improve its arsenal of missiles despite a series of resolutions from the United Nations Security Council that banned North Korea from developing or testing ballistic missiles and nuclear weapons.