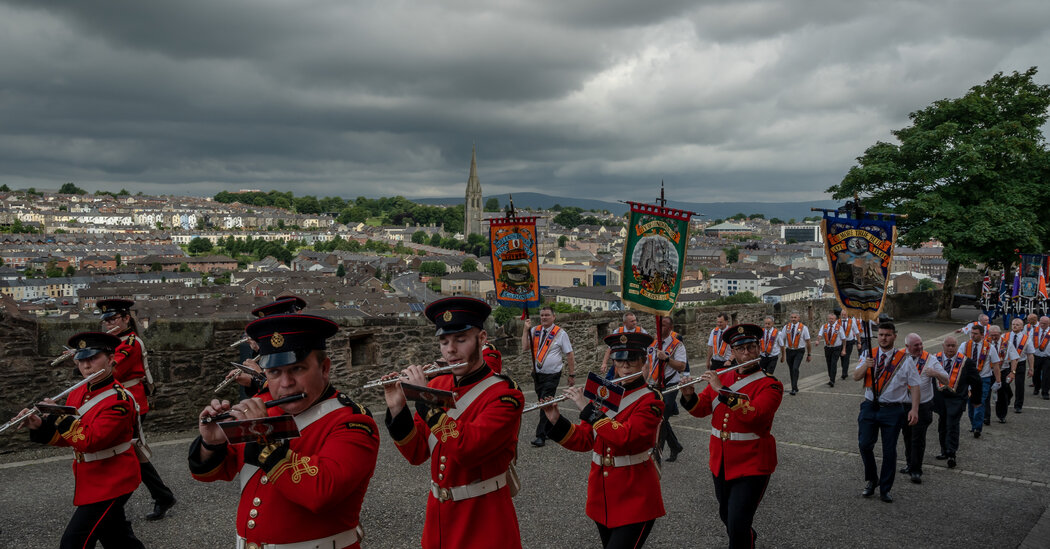 While the Good Friday Agreement halted the violence, known as the Troubles, it failed to address the underlying sectarian roots and created a “fragile balance,” Ms. Hayward said, which depended on cooperation between Britain and Ireland, north and south, and unionists and nationalists.

“Across all three strands of the Good Friday agreement, that balance, the thing that has kept in it place has been taken away,” she said. “So everybody’s feeling that particular degree of insecurity.”

Members of the Orange Order, a religious and political Protestant fraternal order, march in the city — which is also called Londonderry by unionists who want the region to remain part of the United Kingdom — and lead the festivities marking William of Orange’s military victory over the Catholic King James II in 1690.

Many Catholic nationalists see the traditions associated with such celebrations, like the Orange Order marches and bonfires, on which the Republic of Ireland’s tricolor flag are often burned, as a provocation. Caoimhe Archibald, a local Sinn Fein politician — an Irish Republican party — shared an image of one of the bonfires painted in the tricolor on Twitter with the message: “This isn’t an expression of culture, it’s an expression of hate.”

But many Protestants maintain it is a vital celebration of identity and heritage.

“It’s a culture I’ve been brought up on, it’s a culture I’m proud of,” said William Jackson, 59, a day earlier as he played outside with his grandchildren in the Fountain estate ahead of the annual celebration. The neighborhood is encircled by a high metal fence. British flags are duct taped to lamp posts wrapped in barbed wire.

Across Northern Ireland last weekend, bonfires blazed ahead of the parades, as towers of teetering pallets were set alight, casting a flickering orange glow on the faces of onlookers who gathered for street parties.