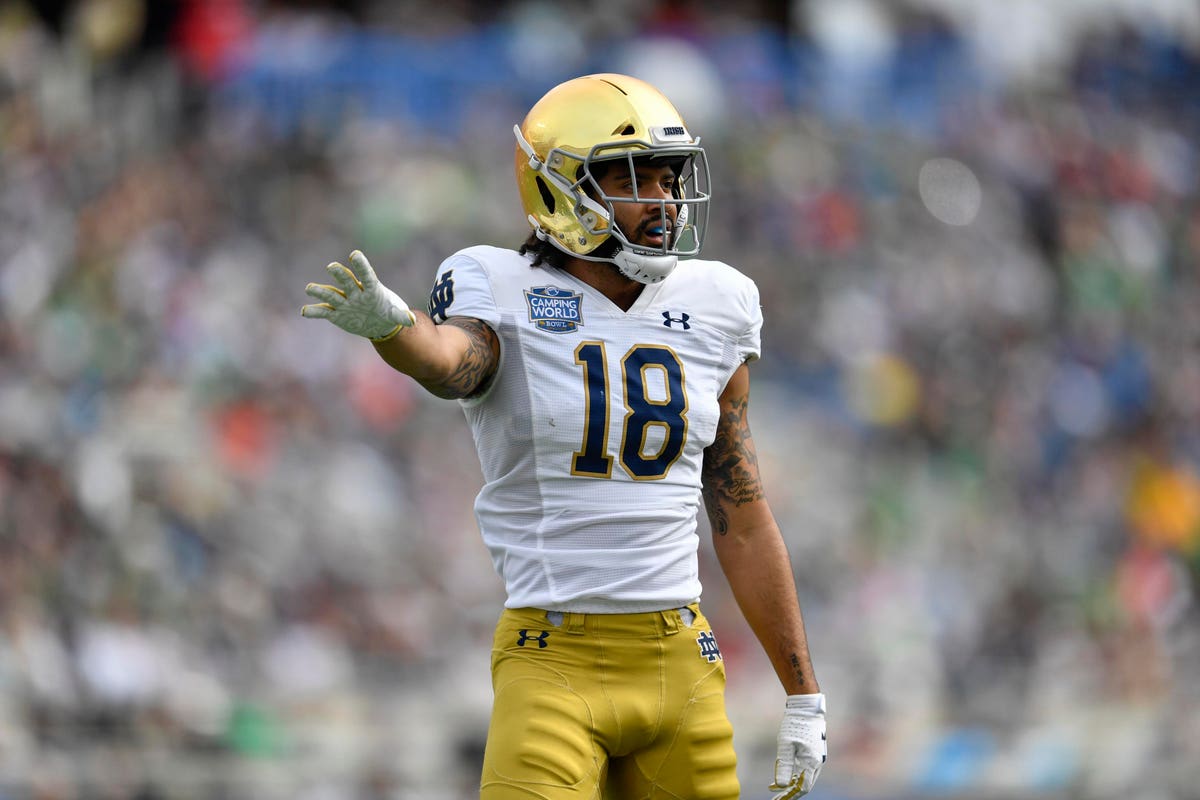 To get a sense of the behind-the-scenes mania associated with Name, Image and Likeness, consider Joe Wilkins Jr.

Notre Dame’s fourth-year junior wide receiver has just seven career receptions, four of those coming in the 2020 season opener against Duke. Though versatile and witty, he’s not even assured of a starting spot with the Sept. 5 season opener at Florida State fast approaching.

Yet, Wilkins finds himself fending off unsolicited NIL offers/proposals via his social media platforms.

“A lot of people will contact or DM me or they’ll comment on your photo to DM that certain page or whatever,” Wilkins said.

“I’m not focused on that at all,” he said. “Maybe during the season, after the first couple games. A couple touchdowns, a couple 100-yard games, that will bring that in. And once that comes, then OK, we’ll cross that bridge when we get there.”

The same goes for classmate and fellow receiver Braden Lenzy. One of the two fastest players on the team, along with running back Chris Tyree, Lenzy has just 18 career receptions. Like Wilkins, he has dealt with an assortment of hamstring injuries.

Taking 18 credit hours this fall so he can graduate in December with a degree in sociology, Lenzy says NIL can wait.

“I don’t have anything crazy because I haven’t done anything,” he said. “Personally, I don’t care enough. Nor am I in a financial status where I would avidly need to go out of my way trying for NIL money. Right now my focus is just football, school and friends. NIL comes lower on the list.”

Not that Lenzy has any issues with his contemporaries cashing in.

“I think the NIL is great and I think a lot of people have majorly benefited (from) it,” he said. “I just don’t really think there’s that much opportunity to be actively involved because I am a Notre Dame football player. I’ll focus on the money part after college.”

For the ninth-ranked Fighting Irish, playing a schedule with four opponents ranked in the AP preseason top 15, one of the hidden advantages might be that freedom to ignore NIL temptations. Elite teams that handle those distractions the best could have the clearest shot at reaching this year’s College Football Playoff.

“Exactly,” Wilkins said. “That’s the point I’m trying to make. You’re distracted about things that don’t matter. I came to school to play football and get a good education. It’s nice that we’re getting this opportunity so people can capitalize on that if they want to, but right now I’m trying to win a national championship. I’m trying to graduate.”

He shook his head.

Internal team dynamics, always a sensitive topic when present glory and pro futures are at stake, could be strained beyond even the typical realm this fall with NIL offers bouncing around most big-time facilities.

“I feel like that’s coming,” Wilkins said. “We’re all Notre Dame men. I say that with so much pride. Notre Dame men are different (from) a lot of other schools.”

“At all these other schools,  you could see that: getting jealous,” Wilkins said. “If your teammate is walking in, and you know he just signed for $30,000, you’re jealous. You’re like, ‘OK.’ And then that person is probably getting (special) treatment from the coaches; he kind of does what he wants.”

It’s not just a quarterback that could cash in. It’s anybody and everybody with enough imagination, appeal and opportunity.

“Jealousy and envy is terrible,” Wilkins said. “And I know that’s in a lot of locker rooms across the country — for sure — but at Notre Dame nobody is thinking about that.”