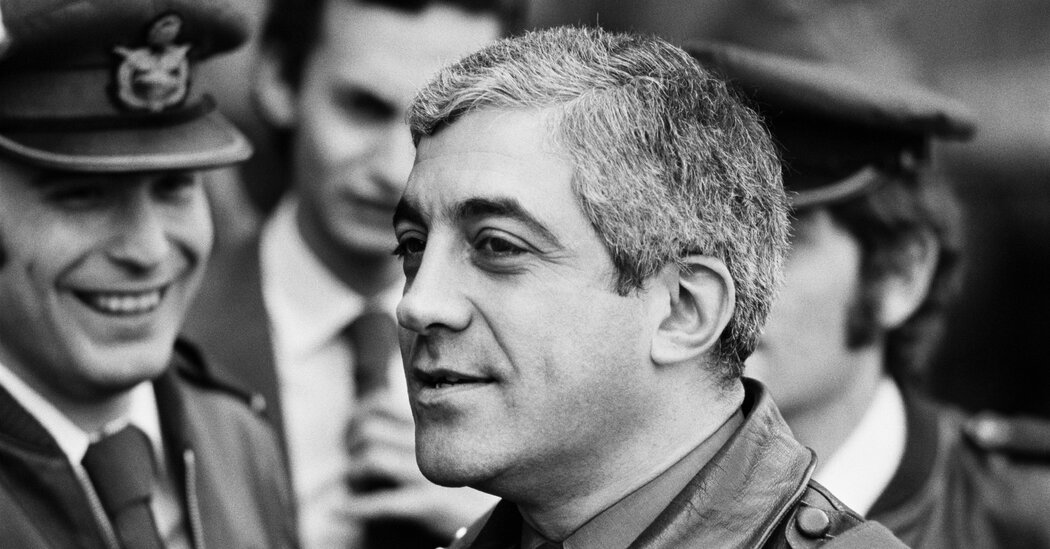 Otelo Saraiva de Carvalho, a Portuguese Army officer who helped mastermind the almost bloodless military overthrow of his country’s dictatorship in 1974 and later served a prison sentence on charges of inciting terrorism, died on July 25 in a military hospital in Lisbon. He was 84.

His death was confirmed by his son, Sergio, who did not cite a cause but said that his father had had heart problems.

Mr. Saraiva de Carvalho, who was widely known by his first name, was one of the officers who planned and led the ouster of Portugal’s right-wing dictatorship on April 25, 1974, paving the way for the country’s return to democracy. The coup became known as the Carnation Revolution after jubilant citizens adorned the rifles of soldiers with red carnations.

The revolution was in large part triggered by discontent within the military; the regime had been forcing soldiers to fight African independence movements in the colonized countries of Angola, Mozambique and Guinea-Bissau. After the coup, Portugal’s colonial rule quickly ended, and the three countries gained independence.

Mr. Saraiva de Carvalho’s career then took a very different turn. He switched to politics and twice ran for president, losing decisively each time. He then served time in prison, convicted over his association with a leftist terrorist organization that sought to undermine the very democracy he had once championed.

Otelo Nuno Romão Saraiva de Carvalho was born on Aug. 31, 1936, in Lourenço Marques (now Maputo), the capital of Mozambique. He was named after a grandfather, Otelo, who had been an actor. His mother, Fernanda Áurea Pegado Romão, was a physiotherapist nurse and theater lover who had been born in Goa, India, a former Portuguese colony. His father, Eduardo Saraiva de Carvalho, worked for Portugal’s colonial post office.

After attending school in Lourenço Marques, Mr. Saraiva de Carvalho went to Lisbon to enlist in Portugal’s military academy in 1955. Six years later, he was deployed to Angola as an artillery captain in the fight against guerrillas seeking independence. He was then sent to Guinea-Bissau, to fight mostly left-wing guerrillas in the independence struggle there.

Mr. Saraiva de Carvalho had already developed sympathy for the independence movements while growing up in Mozambique, his son, Sergio, said. And he came away from his frontline experience in Africa convinced that Portugal’s four-decade colonialist dictatorship had to be toppled.

After returning to Portugal in 1973, he began plotting a coup with rebel officers calling themselves the Movement of Armed Forces. Their Carnation Revolution was over in less than 24 hours, starting shortly after midnight when a radio station broadcast the leftist song “Grandola” as the signal to start the coup. It ended in the evening, when the Armed Forces Movement announced the surrender of Prime Minister Marcello Caetano, who had sought refuge in a military barracks in Lisbon.

Mr. Saraiva de Carvalho was hailed as a national hero and promoted to lead the internal security forces as social unrest and political tensions were mounting; conservatives feared that Portugal could become a communist state in the middle of the Cold War.

But when he sought to parlay his status as a national savior into political success, he fell short. He ran in two presidential elections, first in 1976, when he was a distant second to another military officer, António Ramalho Eanes, and then four years later, when he won only 1.5 percent of the vote.

In his 1980 bid, he had put together a coalition of small extreme leftist political groups, calling it the Popular Unity Force. That same year, a terrorism group known as the Popular Forces of April 25, or FP-25, was formed, and Mr. Saraiva de Carvalho and his coalition were accused by the authorities of being a front for this new threat of homegrown terrorism. FP-25 carried out bombings in Portugal and were held responsible for killing 14 people in the 1980s.

Though he denied any involvement in the group, Mr. Saraiva de Carvalho stood trial in 1985, accused of being the “intellectual author” of the terrorist attacks. He was sentenced to 15 years in prison but was released after five. In 1996, the Portuguese Parliament voted to pardon him and several others who had been sentenced for FP-25 activities. The pardons were promoted by President Mário Soares as a gesture of democratic reconciliation.

“We are talking about a person who played a very important role in ending the dictatorship, but who then fought liberal democracy through violence,” Nuno Gonçalo Poças, a lawyer and newspaper columnist who wrote a book about the terrorism trial, said by email. Most Portuguese, he said, “know that they can thank Otelo for some things and not forgive him for others.”

After his release from prison, Mr. Saraiva de Carvalho stuck to his leftist views and voiced regrets that the 1974 revolution had not transformed the country into the socialist state he had envisioned. In 2011, when Portugal was forced to accept an international bailout amid the European debt crisis, he called on the army to take charge of the country rather than allow international creditors to shape its economy and undermine Portugal’s sovereignty.

After his death, some former officers who had taken part in the Carnation Revolution called for the country’s current Socialist government to declare a national day of mourning. But Prime Minister António Costa refused, telling reporters that it would not have been “coherent” to give Mr. Saraiva de Carvalho such an honor when other key protagonists of the revolution had been denied it.

“It is still too early for history to judge him with the necessary distance,” President Marcelo Rebelo de Sousa of Portugal said in a statement.

In addition to his son, Mr. Saraiva de Carvalho is survived by his daughter, Maria Paula, and his companion, Maria Filomena Morais, a prison official he met while jailed in the 1980s. Another daughter, Claudia, died of malaria at 9. His wife, Dina Maria Afonso Alambre, whom he married in 1960, died in December.