‘Our Goal Is to Keep the Regime on Its Toes.’ Inside Belarus’s Underground Opposition 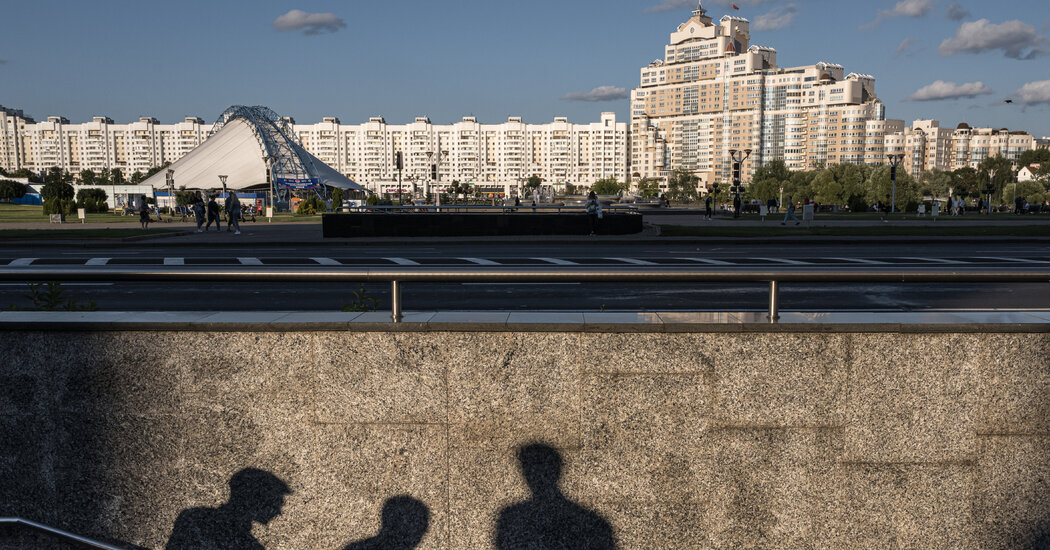 GRODNO, Belarus — The streets of Belarus are quiet now, a year after President Aleksandr G. Lukashenko brutally crushed a wave of mass protests; billboards and tidy landscaping proclaiming 2021 the “Year of National Unity” are ubiquitous.

But despite public assertions of unity and a campaign of arbitrary arrests and government terror, thousands of activists are working clandestinely to spread dissent and undermine the government.

“Our goal is to keep the regime on its toes,” said Maksim, who declined to give his last name for fear of arrest.

Despite the harsh and often arbitrary repression meted out by security agencies, thousands of people are organizing anonymously to register their anger. Maksim’s group, which he says consists of up to 100 people, is just one of many that have sprung up in cities and towns across the country.

Mr. Lukashenko cracked down on the opposition that arose last year after a disputed election. Now, with the world’s attention focused on Afghanistan, it may appear that he has things under control. But under the surface, opposition activists are working assiduously to keep the revolt alive, and they firmly believe it is only a matter of time before the strongman loses his grip.

On Aug. 9, for instance, a dozen Belarusian activists draped themselves in flags of white and red — the colors associated with the opposition and virtually banned in Belarus from display in any form — and staged a protest in a secluded pine forest under cover of darkness. No one could see them, but they shared pictures of their action online.

If caught, Maksim and his band of “partisans,” as they call themselves in a nod to World War II-era antifascist guerrillas, could face years in prison. In contemporary Belarus, under Mr. Lukashenko’s increasingly isolated and authoritarian rule, many have been jailed for far less.

A man in Minsk was sentenced to 12 days in prison over his young son’s drawing of the sun in a blue sky that had been hanging in a window for four years. Another man in Brest was jailed for a month for writing a line from the Lord’s Prayer on a building. A man was jailed for 15 days because he left the red and white box a TV came in on his balcony.

Many people are finding ingenious ways to make their presence felt. Tech-savvy activists developed Krama, an app that facilitates boycotts by allowing people to scan the bar codes of goods in stores to see if they are connected with Mr. Lukashenko or his acolytes. It also flags restaurants and other establishments linked to the government.

Others spread self-published leaflets and newspapers in the best traditions of Soviet samizdat. And some people hang white and red ribbons on trees, making life hard for maintenance crews that have to remove them. A partisan choir organizes flash mobs that sing national Belarusian songs in public.

In Minsk and other bigger cities, groups such as Maksim’s operate at a hyperlocal level, gathering quietly in secure locations to prove that all is not lost.

“We want to show people that nothing has been lost, that we are still in the majority,” Maksim said in an interview via Telegram. The New York Times interviewed representatives of three such groups.

Protected by layers of secrecy and operating as underground cells, some groups of partisans engage in more audacious actions. One group has tried to slow rail traffic by disrupting the signaling system on a line that carries potash — a principal export that fills Mr. Lukashenko’s coffers with much-needed foreign currency — to ports on the Baltic Sea. The actions have no potential to physically harm anyone, but slowing the transport, including along one of the China-Europe transit routes, damages the government’s budget.

Additionally, a group of “cyber partisans,” operating mostly outside the country, aims to disrupt government communications and obtained and has disseminated sensitive information about members of law enforcement who participated in crushing last year’s protests.

Belarus’s government is working hard to infiltrate these groups, both within and outside the country, often by establishing numerous fake groups to lure the activists into revealing their identities, members said.

“We risk everything,” a representative of one group active in a small town near Minsk said in an interview. “They look for us as though we are real terrorists.”

Svetlana Tikhanovskaya, the opposition leader who ran against Mr. Lukashenko last autumn, said her allies were determined despite the crackdown.

“The protest and activity of people is not so noticeable now, because people were driven out of the streets and squares by violence,” said Ms. Tikhanovskaya who claimed victory in the election but fled to Lithuania in the days after the vote. “But people did not stop fighting.”

She said actions by cyber partisans “terribly demoralize the security forces and destroy their ranks,” and insisted that labor strikes would “sooner or later” unseat the dictator.

People who are less committed than the hard-core activists but still want to participate are doing so through apolitical activities. In Grodno, a city on the western edge of the country that was an opposition hotbed during the protests, activists have used bicycle tours, church-related events or other sporting and cultural gatherings as plausible reasons to get together and “just look each other in the eye,” said Anastasia, a local organizer who would not give her last name.

None of these strategies are foolproof. In Minsk recently, a group of triathletes was taken in for questioning because of the colors of one rider’s jersey, and a tour group was arrested and charged with organizing a rally. Recently Mr. Lukashenko’s government banned all Belarusian athletes from participating in international competitions after an Olympic sprinter, Kristina Timanovskaya, criticized her coaches for incompetence. (She subsequently sought and received asylum in Poland.)

The arbitrary nature of the crackdown makes it hard even for those seeking to operate within the law.

“As in any totalitarian system, laws are deliberately made fuzzy so that we don’t even know what is legal and what isn’t,” said Aleksei Shota, who edits Hrodna.Life, a local news outlet that faces the risk of being outlawed for publishing banned “extremist” materials. “Even if we wanted to censor ourselves, we wouldn’t know how.”

If prosecutors are successful, Mr. Shota’s publication will join a long list of Belarusian media outlets that have been banned over the past few months. Whole newsrooms have been shut down, with many journalists forced to flee the country. At least 27 are currently in custody.

Still, many outlets continued to operate, publishing news on social media and encouraging readers to access their materials via VPN networks. Mr. Shota, 32, said that regardless of the decision on his publication, he intends to keep publishing his work on social networking apps like Telegram.

He was adamant that, unlike many of his classmates and friends, he would remain in Belarus. “My family has lived in Grodno for 150 years,” he said, surviving Russian czars, and Hitler and Stalin. “Who’s Mr. Lukashenko compared to them? He’s a joke.”

Hrodna.Life’s tiny newsroom sits next door to a store that was shut down for selling opposition-colored souvenirs and a bar that is currently under pressure for having sheltered protesters from the police last year.

Nongovernmental organizations have also been targeted, with more than 40 shut down at the end of July on orders from Mr. Lukashenko. The list included many working in non-political areas, like helping the disabled or those with AIDS. In Grodno, the local government is pressuring a children’s hospice to shut down, going so far as to open a criminal case against its director.

Despite the crackdown, many NGOs have continued their work online to aid Belarusians in need, whether organizing the purchase of school supplies for the children of political prisoners or providing assistance to the detainees themselves. Viasna, the country’s pre-eminent human rights organization, still operates through a network of volunteers based inside and outside Belarus.

Kristina Vyzovskaya, 40, doesn’t use Krama anymore because she “remembers what she shouldn’t buy by heart.”

A psychiatrist, she helps Belarusians who have been traumatized by Mr. Lukashenko’s crackdown. Dozens of her clients had to flee the country and several have been arrested, she said. Under pressure, many suffered severe burnout and stress.

Mr. Shota, the journalist from Grodno, said Mr. Lukashenko, impulsive and mercurial, was sometimes his own greatest enemy. Things like forcing down a commercial airliner to detain an opposition blogger or encouraging migrants to open a new route to the European Union through Belarus have drawn increasingly severe Western sanctions that could further threaten his power, he said.

His crackdown on NGOs would have similarly deleterious effects over the long term, he said.

“Everything that the government didn’t do before was handled by the NGO sector,” he said, including procuring crucial equipment to fight the Covid-19 pandemic — which Mr. Lukashenko has dismissed as a “psychosis.”

“Belarus is a partisan republic,” he said. “We are the descendants of the partisans.”