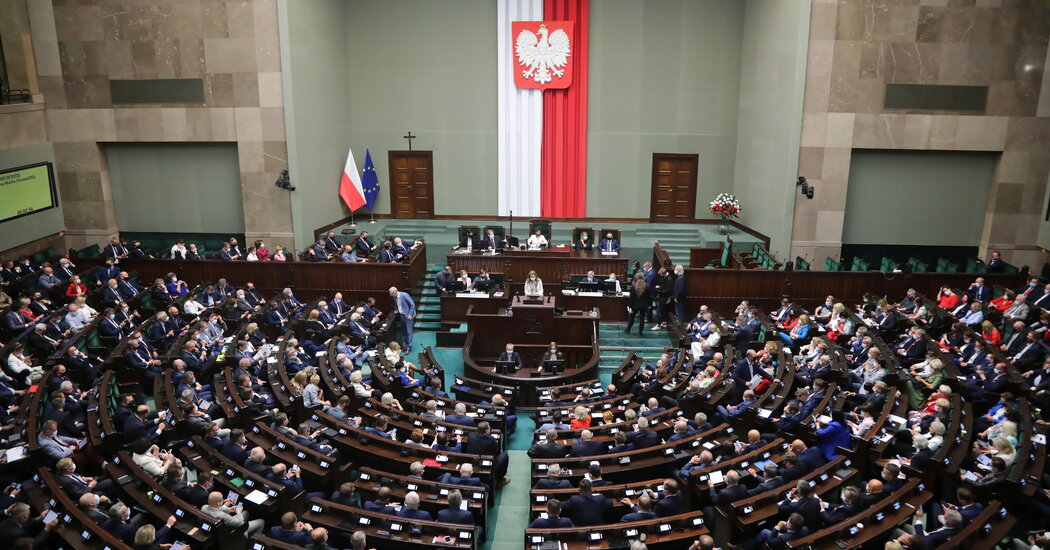 Poland’s right-wing coalition government won a narrow victory in Parliament on Wednesday when legislators passed a contentious media bill that could lead to an American-owned television station losing its license.

The passage of the media bill by the lower house came in a stormy and chaotic session of Parliament in which the legislation was briefly postponed by opposition legislators. The government forced a vote to rescind the postponement, bringing cries of outrage from legislators.

The government, led by the Law and Justice party of Jaroslaw Kaczynski, will continue to lead Poland unless it loses a vote of confidence, which would require a vote of two-thirds of the lower house. But the government is wounded and facing dissent from another coalition partner, so may not last until the next scheduled elections, in 2023.

On Tuesday, the small Agreement party, led by Deputy Prime Minister Jaroslaw Gowin, criticized the media bill, which has alarmed the United States and set off protests around Poland. When Prime Minister Mateusz Morawiecki fired Mr. Gowin for criticizing the legislation, the party formally left the government.

The Agreement party, with 13 seats in the 460-seat Sejm, or lower house, was the smallest and most moderate partner in the coalition, which is dominated by Law and Justice, and has also objected to new tax legislation.

The bill, which passed the lower house on Wednesday on a vote of 228 to 216, with 10 abstentions, would strengthen a ban on non-European companies controlling Polish broadcasters. The network most affected by the bill is TVN, which has numerous channels, including the popular all-news TVN24, and which is majority owned by the American company Discovery Inc. through a subsidiary registered in the Netherlands.

The network has been more critical of the government than most of the media, especially Poland’s public broadcaster, TVP, which has become an outlet for the government’s positions.

The Trump and Biden administrations have lobbied Warsaw to leave TVN alone, and recently Derek H. Chollet, the State Department counselor, warned the Polish government that further American investment could be at risk if the bill became law.

There have been many worries expressed about the new legislation, which appears to be a further attack on media freedom and independence. Since Law and Justice came to power in 2015, Poland has fallen from the 18th to 64th place in the World Press Freedom Index, compiled by media watchdog group Reporters Without Borders.

Mr. Gowin said that “this law clearly violates the principle of media freedom.” He added that it would “push us toward a confrontation with the United States, which is our most important ally from the point of view of defense.”

Timothy Garton Ash, a political scientist at Oxford who closely follows Poland, warned that Poland was following Hungary in “dismantling democracy inside a member state of the E.U.”

Radoslaw Sikorski, a former Polish foreign and defense minister, and now an opposition European legislator, said that “a vote for taking over TVN” was a vote “for an anti-Western dictatorship with impunity for thieves.’’

To become law, the bill must go to the Senate, already controlled by the opposition, which has a month before it must vote. If rejected there, as expected, it must then be passed again by the lower house with an absolute majority, and then signed by the Polish president. So there will be considerable debate and lobbying to come.

The government argues that the bill is designed to prevent countries like Russia and China taking over local media; the opposition says that it is meant to bring TVN under the control of Polish owners who support the government.

Poland’s government is already in a major confrontation with the European Union over its challenge to the rule of law and the supremacy of the European Court of Justice.

Brussels has given Warsaw until Aug. 16 to comply with rulings from the European Court demanding the suspension of a disciplinary “chamber” that critics say has been used by Law and Justice to intimidate judges not to its liking. Poland’s top court has said that the European court, which is based in Luxembourg, does not have the power to impose such orders under Poland’s Constitution.

But last Saturday, the Polish government appeared to back away, with Mr. Kaczynski saying that Poland would “scrap the disciplinary chamber in the form in which it currently functions,” while continuing to insist that he did not recognize the European court’s orders because they went beyond the limits of E.U. treaties. The European Union has made it clear that its court’s rulings transcend national courts and vowed to fine Poland if it did not comply.

Mr. Kaczynski said that the government would propose a new version of the chamber in September. But Brussels considers Poland’s challenge to the rule of law and to media freedom to be deeper than the disciplinary chamber itself, so the conflict is expected to continue.