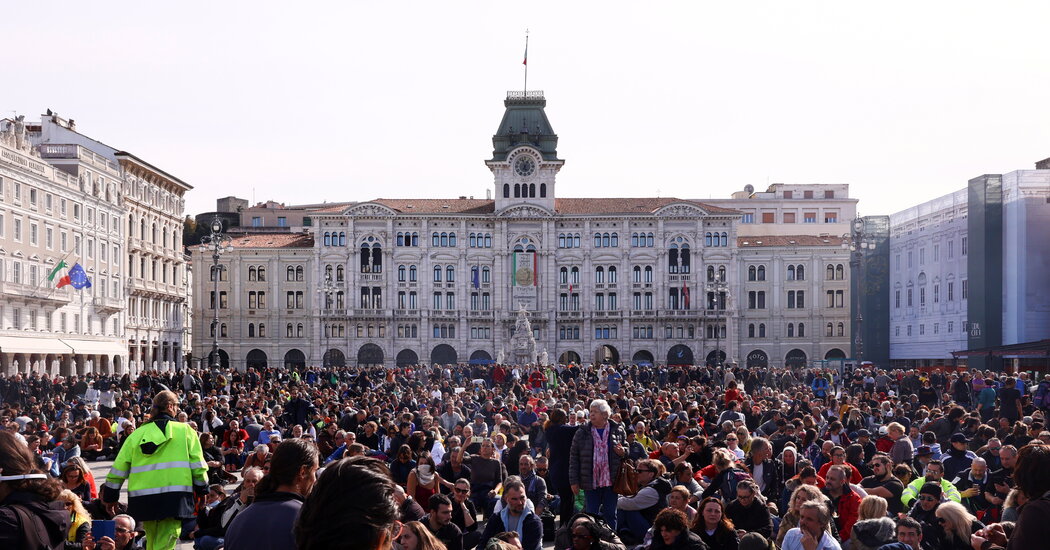 The Italian police on Friday searched the homes of four people in Milan affiliated with the “No Green Pass” movement, a mixed group that has been protesting for weeks over a nationwide coronavirus health-pass mandate.

The four people, whose names were not immediately released, are being investigated on accusations of harassing journalists who are reporting on the demonstrations. The rallies have become common occurrences in several Italian cities, creating traffic chaos and disrupting daily life.

Alberto Nobili, an antiterrorism prosecutor in Milan who is coordinating the investigation, confirmed that the searches had been carried out.

As in several other countries in Europe, demonstrations against coronavirus restrictions have become commonplace in Italy. This week, the Interior Ministry instructed local officials to consider banning demonstrations in some areas and to take measures to deal with unruly protesters.

“It’s about balancing rights — the right to demonstrate, but also the right to work, to study and to one’s health,” Interior Minister Luciana Lamorgese said of the ministry’s instructions, which were outlined in a memorandum made public late Wednesday.

Protesters in several cities — Milan, Padua and Trieste, in particular — have staged frequent demonstrations, often on Saturday afternoons, in which they block traffic and limit access to downtown stores. The protesters object to a government requirement that all workers obtain a certificate known as a Green Pass to show that they have been vaccinated against the virus or have recently tested negative, or face fines and unpaid leave.

Local law enforcement authorities have been asked to identify areas within each city where mass gatherings should not take place as long as Italy’s pandemic state of emergency remains in effect. In many cases, these areas will include busy downtown shopping areas.

The ministry’s memorandum says that mayors and local officials can decide whether to require masks or social distancing at gatherings in their jurisdictions.