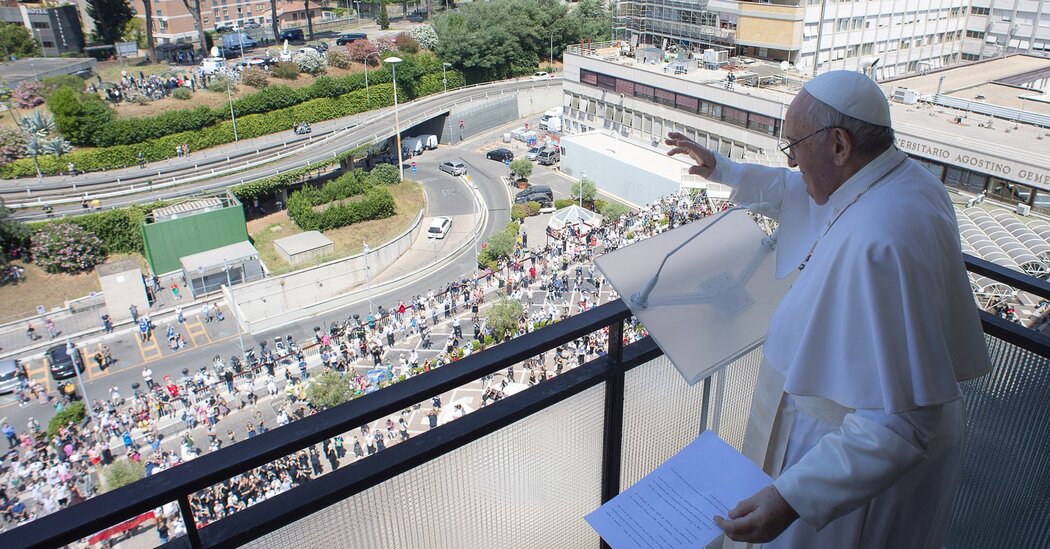 ROME — Pope Francis left Rome’s Gemelli hospital on Wednesday and returned to the Vatican, 10 days after he underwent colon surgery.

The pope had colon surgery on July 4 for what the Vatican said was a scheduled operation, and the unexpected announcement that he had been hospitalized alarmed many because of the seriousness of the surgery and the Vatican’s history of obfuscation on the health conditions of pontiffs.

The pope sat in the front seat of a Ford Focus as it arrived outside the Vatican walls, where he greeted the police and army soldiers who keep watch, before getting back into the car. The Vatican did not immediately comment about his departure from the hospital. He then entered the Vatican, where he received a salute from the Vatican gendarmerie.

Francis got in and out of the car with visible difficulty, but nonetheless stood on his own as he greeted the police and smiled.

It was the first time that Francis, 84, has faced a significant health issue during his eight-year papacy. Apart from recurrent episodes of sciatica, a nerve condition that causes back, hip and leg pain, and the odd cold, the pope has rarely missed scheduled events.

Daily medical updates by the Vatican communications office have been short on detail, describing the pope’s post-surgery convalescence as being normal. On Tuesday, Mr. Bruni said in a statement that Francis was “continuing his planned treatment and rehabilitation, which will allow him to return to the Vatican as soon as possible.”

Francis made a public appearance on Sunday, when he led the Angelus prayer and blessing from the balcony of his suite on the 10th floor of a Rome hospital. The Vatican News website, a Vatican-controlled media portal, posted pictures of the pope during his convalescence, while he was still using a wheelchair.

Vatican experts wonder whether pope’s health problems will slow him down or accelerate discussion on issues that he has asked his church to consider — about married priests, the role of women in the church, the embrace of gay Catholics and Communion for the divorced and remarried.

The Italian news media reported that Francis had scheduled the surgery for the beginning of July because his schedule was light then. The weekly audiences he holds with the faithful on Wednesdays have been suspended, and he has no major appointments scheduled.

Who According to Krishna Shroff Would Win the Dance Battle? Jackie Shroff or Tiger Shroff or Disha Patani