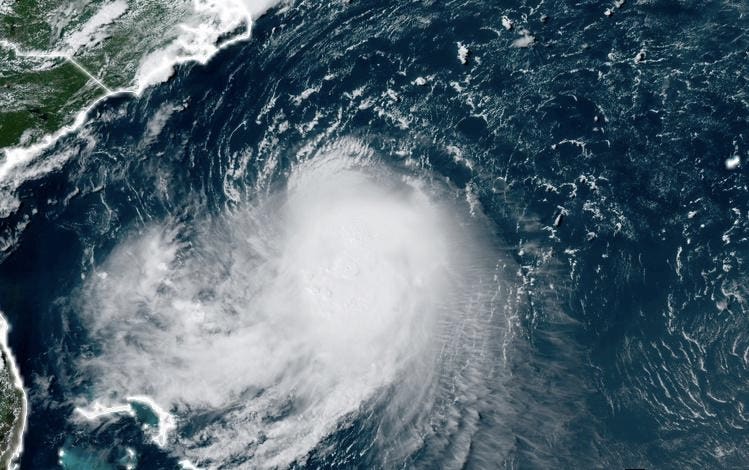 Many parts of the Northeast U.S. from New York (Long Island) to Massachusetts (Cape Cod) are under a Hurricane Watch at the time of writing. Yep, you read that correctly. According to the NOAA’s National Ocean Service website, a hurricane watch means, “Hurricane conditions (sustained winds of 74 mph or higher) are possible within the specified area….is issued 48 hours in advance of the anticipated onset of tropical-storm-force winds in an area.” As of Friday afternoon, Tropical Storm Henri was making its way towards the highly populated Northeast, which includes metropolitan New York City, Hartford, Providence and Boston. Storm surge and winds will be a problem for the area, but I am also worried about the potential for “double trouble” – Henri’s rainfall and soil moisture conditions left behind by the remnants of Tropical Storm Fred.

Before I explain, let’s dissect the latest information from the National Hurricane Center on Tropical Storm Henri. Forecasters expect the storm to gradually move into a lower wind shear environment and the warm Gulf Stream waters. These conditions could allow the storm to strengthen to a hurricane Friday evening or early Saturday. By Sunday, the storm should be far enough removed from the “high octane” Gulf Stream waters and colder New England waters will cause a transitioning to weakening. However, it certainly could still be a hurricane near its ultimate landfall location.

Brian McNoldy is an expert at the University of Miami. In his “must-read” blog series he points out that only sixteen hurricane have made landfall between Long Island and Cape Code since 1851. McNoldy also cautions about the inevitability of storm surge and coastal flooding from Maryland to Maine whether the storm makes landfall or not. By now, you are probably wondering how the remnants of Tropical Storm Fred get into the mix. It’s coming, but I need a few more lines to get there.

Henri will be a slow moving storm, which is always one of my big concerns. Weather Channel expert Dr. Rick Knabb, the former director of the National Hurricane Center, tweeted, “….over longer duration, and it’ll also rain more with big inland flood risk.” The projected rainfall totals over the next three days are shown in the map above. The footprint of Henri is clearly evident in the eastern U.S.

Ok, here’s where Fred comes into the picture. I plotted the rainfall footprint of Fred (August 16-20th 2020) using some handy NASA interactive tools (map above). Swaths of higher rainfall totals are evident in the Northeast associated with the storm. NOAA analyses also reveal that rainfall totals are running above normal for the month of August (graphic below).

Antecedent wet conditions are a recipe for disaster. Rainfall from Henri coupled with wet preexisting wet soils amplify the flood threat. Additionally, soil moisture (plus wind) can lead to falling trees. Falling trees cause downed power lines, outages, and safety risks for people. Boston TV meteorologist Eric Fisher tweeted some data from NASA’s SPoRT Center. Its website has a near-real time analysis of soil moisture, which I have also used in some of my research on the Brown Ocean Effect. Current soil moisture conditions within Henri’s cone of uncertainty are at 80th to 100th percentile levels as seen in the map below. It is virtually certain that Fred contributed to these values and is one reason why I am worried about Henri whether it is a strong Tropical Storm or a weak Hurricane.