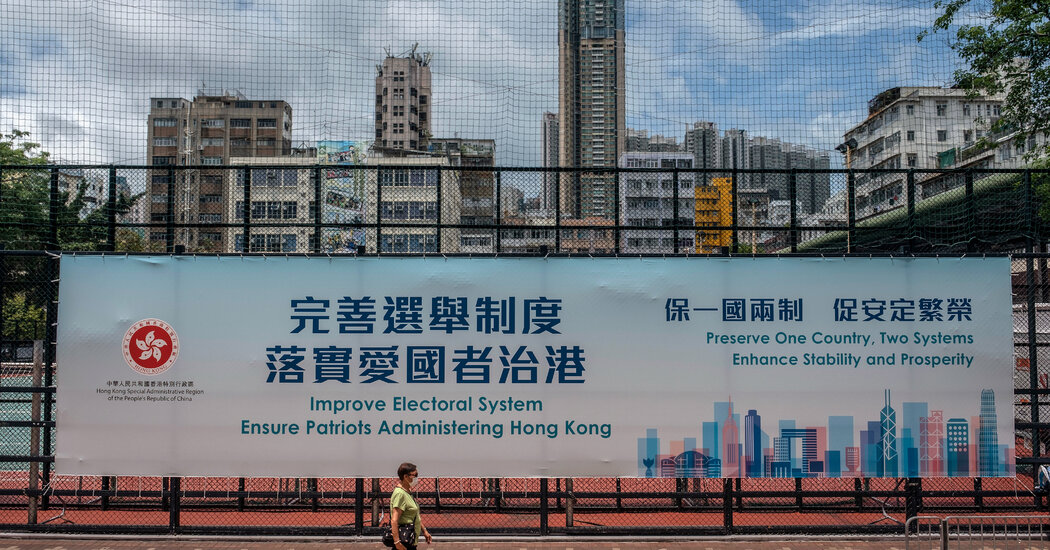 HONG KONG — The Sea Bear Swimming Club, in the northeastern outskirts of Hong Kong, is a humble organization. It trains children for local competitions and offers free lessons to older adults. Its Facebook page, with just 151 followers, features photos of grinning students in swim caps and the occasional cat meme.

But in the coming weeks, the group will take on a new responsibility: helping to choose the city’s next leaders.

The club is one of about 400 so-called grass-roots associations recently tapped by the government to play a key role in the city’s elections after Beijing overhauled the system in March to ensure that only “patriots” could run the territory. The groups have been appointed to vote next month for the city’s Election Committee, a 1,500-member body that will then pick the city’s leader, known as the chief executive, and many legislators from a slate approved by Beijing.

The government says it is giving more voice to ordinary Hong Kong residents. But the groups also share an important characteristic: demonstrated support for Beijing and the Hong Kong government.

Besides Sea Bear, other groups entrusted with this responsibility include The Family, a community organization that cheered on the police during the antigovernment protests that rocked the city in 2019. There is the Bright and Elite Youth Association, a group of young professionals from Hong Kong and mainland China that held an event attended by an official from the Central Liaison Office, Beijing’s top arm in Hong Kong.

A group that hosts dance recitals, according to its Facebook page, organized a performance celebrating the 100th anniversary of the Chinese Communist Party together with Hong Kong’s biggest pro-Beijing political party — which has also co-hosted swimming lessons with Sea Bear. Also onboard are the Kam Tin Table Tennis Association and the Chinese Arts Papercutting Association, according to a recently released roster of voters.

Several groups defended their right to participate in the election process.

“We may seem like small potatoes, but when you put all these small organizations together, isn’t this the grass roots?” said Wan Ying-bo, a coach at Sea Bear, when reached by phone.

The election changes all but eliminated the voice of pro-democracy blocs in the Election Committee, which had already been hobbled by Beijing’s far-reaching national security law. Opposition lawmakers have been arrested. Churches, labor unions and arts groups have disbanded, citing fear of arrest. Pro-democracy politicians who would have held seats on the Election Committee as low-level elected officials called district councilors have resigned in droves in the face of various threats.

The overhaul has also vastly reduced the public vote. Previously, about 240,000 voters — already a mere fraction of the city’s 7.5 million residents — could choose Election Committee members through a mix of individual ballots and ones cast by groups. Now, the number has been cut to below 8,000, as most individual votes have been eliminated.

Election results have consistently shown that more residents favor the pro-democracy camp. But countering that was precisely the point, said Ivan Choy, a political scientist at the Chinese University of Hong Kong.

“It is quite clear that the Beijing authorities want to make sure that they can predict and even control the election outcome,” he said. “They want those organizations who are loyal.”

The Chinese Communist Party has long relied on trade unions and community organizations to build its base in Hong Kong. The central government helps fund the city’s pro-Beijing parties, which partner with business tycoons to sponsor social welfare groups or even establish new ones, scholars have shown. Now, some of these groups are being recruited for a more overtly political function.

Hong Kong’s election system was never truly democratic, with just a portion of the legislature elected by popular vote. The chief executive has always been chosen by the Election Committee, which was already stacked with pro-government figures before the overhaul. Calls for genuine universal suffrage have long been at the heart of protests.

Despite the constraints, the opposition over the years managed to win many of the popularly elected seats, giving it a small but influential voice on the Election Committee. Now, Beijing’s electoral changes have stamped out that limited power, in part by reconfiguring the committee to tie it even more closely to the authorities.

Within that reconfiguration, the addition of the grass-roots groups is relatively minor. They will be allowed to choose 60 of the 1,500 Election Committee members. By contrast, nearly 200 members will be chosen by elite members of the Chinese legislature or another advisory body to Beijing.

The grass-roots associations have attracted particular attention because of their claim to represent a more democratic impulse. Pro-democracy residents have alternately ridiculed or fumed at the groups. One headline in a local newspaper, quoting experts, called some of the groups’ selection “comical.”

When The New York Times sent a message to a WhatsApp number listed on the dance recital group’s Facebook page seeking an interview, the person on the other end immediately responded “SORRY,” then blocked further messages.

A staff member for The Family, reached by phone, said the group performed community service and had more than 700 members, but directed further questions to the group’s president, a man she identified only by his surname, Lam. But Mr. Lam said: “Too many media inquiries. I don’t want to talk to reporters.”

Calls or emails to at least 20 more organizations went unanswered.

Dozens of the groups on the roster shared addresses, down to the room number. The Sea Bear Swimming Club, for example, was listed at the same address as a Sea Bear Squash Club. When a reporter called a number listed online for the squash club, Mr. Wan, the swimming coach, picked up. He said the organizations were separate, though he did not explain.

At least four groups — including the Bright and Elite Youth Association, the group of young professionals — were housed in the same unit of a mixed-use building in the Wan Chai neighborhood, according to the government’s list and the building’s directory. A man who answered the door of the unit when Times reporters visited said no one there was authorized to speak to the news media. In the room behind him, dozens of alternating Hong Kong and Chinese flags were strung up on the walls.

There is no indication that the groups do not actually exist or do not perform the work they say they do. In the hallway outside the groups’ office in Wan Chai, stacks of cardboard boxes were labeled indicating they contained dozens of soup packets for distribution to families.

Still, the links between many of these grass-roots groups and the establishment are evident. In some cases, the groups are founded and headed by politicians from pro-Beijing parties, and their activities align with the central government’s objectives.

Bright and Elite, for example, hosts cultural and educational exchanges with the mainland. Another group on the grass-roots roster, Action of Voice, is led by Frankie Ngan Man-Yu, a leader of the pro-Beijing party Democratic Alliance for the Betterment and Progress of Hong Kong. His group, he said, visits middle schools in Hong Kong to conduct patriotic education.

“These are apples and oranges. One person can, of course, be part of many groups,” Mr. Ngan said when asked about his dual memberships. “So there is no reason for you to put all these things together.”