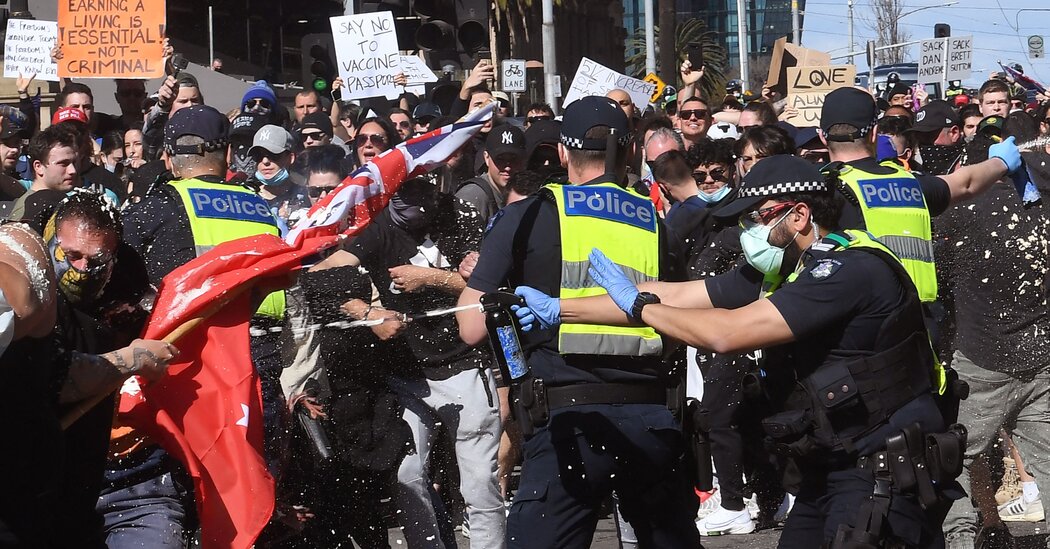 MELBOURNE, Australia — Protesters in Melbourne demonstrating against Covid restrictions on Saturday clashed with the police, who used pepper spray to disperse them. Several officers were injured and hundreds of people were arrested, the police said.

More than 4,000 people joined the protest, one of a number of anti-lockdown demonstrations that were held on Saturday in Australian cities. Protesters in Melbourne, most of whom appeared not to be wearing masks, charged police lines, threw objects at officers and set off flares, according to news reports and footage posted on social media.

Four officers were treated for concussions, one for a broken thumb and two others for possible broken noses, according to the police in the state of Victoria, which includes Melbourne. Another officer was treated at the scene for a cut on the neck.

The police said it was the first time officers had been forced to use “a range of nonlethal options” to disperse anti-lockdown protesters in Melbourne, which has seen a number of demonstrations against restrictions. Officers fired pellets and used pepper spray.

“While there were some peaceful protesters in attendance, the majority of those who attended came with violence in mind,” the police said in a statement.

Earlier Saturday, Daniel Andrews, the premier of Victoria, extended Melbourne’s lockdown, which has been in place since early August, to the entire state, after 17 new cases were detected in the regional hub of Shepparton.

Restrictions in Melbourne were also tightened. Child care is now only available to essential workers, and the authorities are recommending that children wear masks.

A much smaller protest was held on Saturday in Sydney, the epicenter of Australia’s current Covid outbreak, in which the Delta variant of the virus has been dominant. New South Wales, the state that includes Sydney, reported 825 new cases on Saturday, the most since the pandemic began.

Roughly 250 people attended the Sydney protest, vastly outnumbered by about 1,500 officers patrolling the streets, officials said. Forty-seven people were arrested and 260 tickets were issued for violations of Covid restrictions.

The authorities in Sydney had barred taxis and ride-share services from taking people to the central business district in an attempt to head off the protest. Trains had also been prevented from stopping at stations in the area.

“Anybody who attends the protest tomorrow is going to feel the full force of the N.S.W. police force,” David Elliott, police commissioner of the state of New South Wales, which includes Sydney, said on Friday. “You’ll also be endangering the lives of your loved ones and of course prolonging this lockdown. You’re going to be doing everything you want to stop.”

Earlier this week, Mr. Elliott said it was “no coincidence” that a recent spike in the number of daily infections in the state had followed an anti-lockdown protest three weeks ago.

About 5,000 people attended a peaceful protest on Saturday in Brisbane, where no restrictions are in place, according to the local police.