Resistance fighters drive Taliban from 3 districts in the mountains north of Kabul. 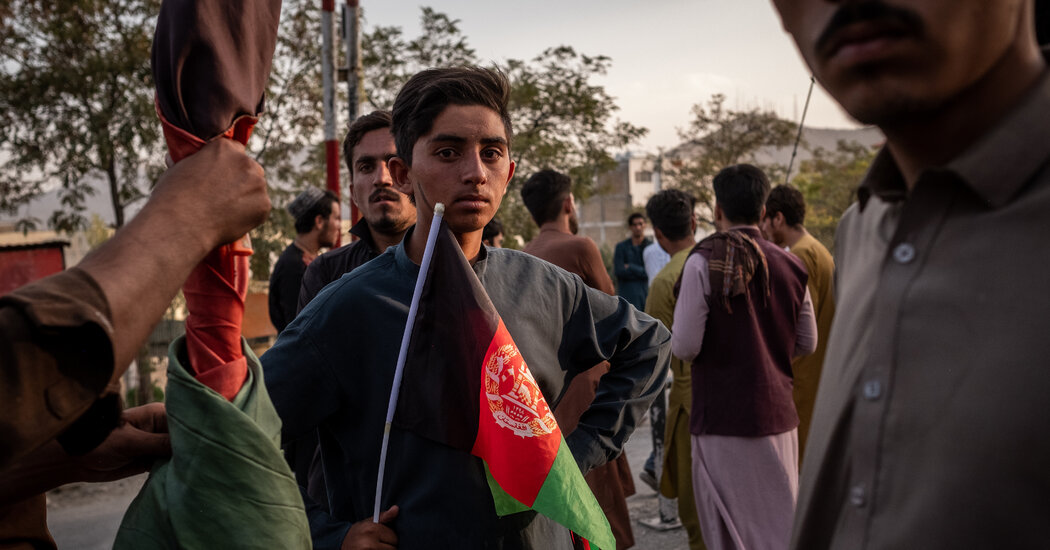 The Taliban faced the first armed challenge to their rule as former Afghan soldiers, aided by villagers, drove the militants out of three districts in the mountains north of Kabul, according to former Afghan officials.

The fighting took place in remote valleys on Friday, and details of the clashes were still trickling out. But video posted on social media showed fighters and civilians tearing down the white flag of the Taliban and raising the red, green and black Afghan national flag. The former acting defense minister, Bismillah Khan Mohammadi, called the fighters “popular resistance forces,” in a tweet.

“The resistance” he wrote, “is still alive.”

How long it could survive is another question. Afghan troops were said to have retreated to the area last week as the country’s government and military collapsed around them, and the fighting was reportedly set off by the Taliban conducting house-to-house searches.

The clashes took place in three districts — Pul-e-Hesar, Deh-e-Salah and Bano — and the fighters claimed to have killed as many as 30 Taliban and captured nearly two dozen more. A pro-Taliban Twitter account put the militants’ death toll at half that number.

The uprising on Friday took place to the north of the Panjshir Valley, a strategic sliver of territory where a handful of Afghan leaders once organized a force to resist the Taliban. The valley held out against the Taliban in the 1990s and was used by American spies and special forces operators to launch the American invasion that would drive the militants from power. But Afghanistan, the Taliban, and the world have changed dramatically in the intervening decades.

The militants are battle hardened and far better armed after capturing huge arsenals of American-made weapons as they swept across the country this summer. The Panjshiris, in contrast, have given up most of their weapons, and lack the kind of single, unifying leader they had in the 1990s. Most important, though, there appears to be little international will to back them or any armed resistance to the Taliban, for that matter.

The United States and its allies are focused on evacuating people from Kabul. They are actively seeking cooperation from the Taliban to do so, and so far the militants have proven somewhat cooperative, eager to show the world that they are no longer the same brutal zealots who ruled Afghanistan two decades ago.

Armed uprisings could quickly change that calculus, prompting the Taliban to violently clamp down at the very moment when the United States and European countries are struggling to keep the evacaution moving.

American military and intelligence officials said on Saturday they were closely monitoring reports that Afghan resistance fighters had pushed the Taliban out of three northern districts, but there had been no requests from those groups for American airstrikes or other assistance, and none offered, at least publicly.

Military officials said they would entertain any such requests very warily at this point, fearing that any battlefield strikes against the Taliban could jeopardize the fragile agreement American officials have reached with senior Taliban officials in recent days to allow Americans safe passage to the airport in Kabul.

The Pentagon has said there are no Afghan military or security forces still operating as functioning units in the fight against Taliban.

Leaders in Panjshir seem to know that any fighting is likely to be seen by the United States as a distraction that could endanger an evacuation effort that has already proven disastrously chaotic. Many are furious at what they consider a betrayal, and not hesitant to say so.

“A super power signed an agreement with a terrorist group. What you see in Kabul is a massive humiliation for Western civilization,” said Amrullah Saleh, one of the leaders of the nascent resistance effort who was the country’s first vice president until Sunday. Now he is styling himself the “caretaker president” of Afghanistan.

Neither he nor other leaders in Panjshir immediately responded to requests for comments on Saturday.