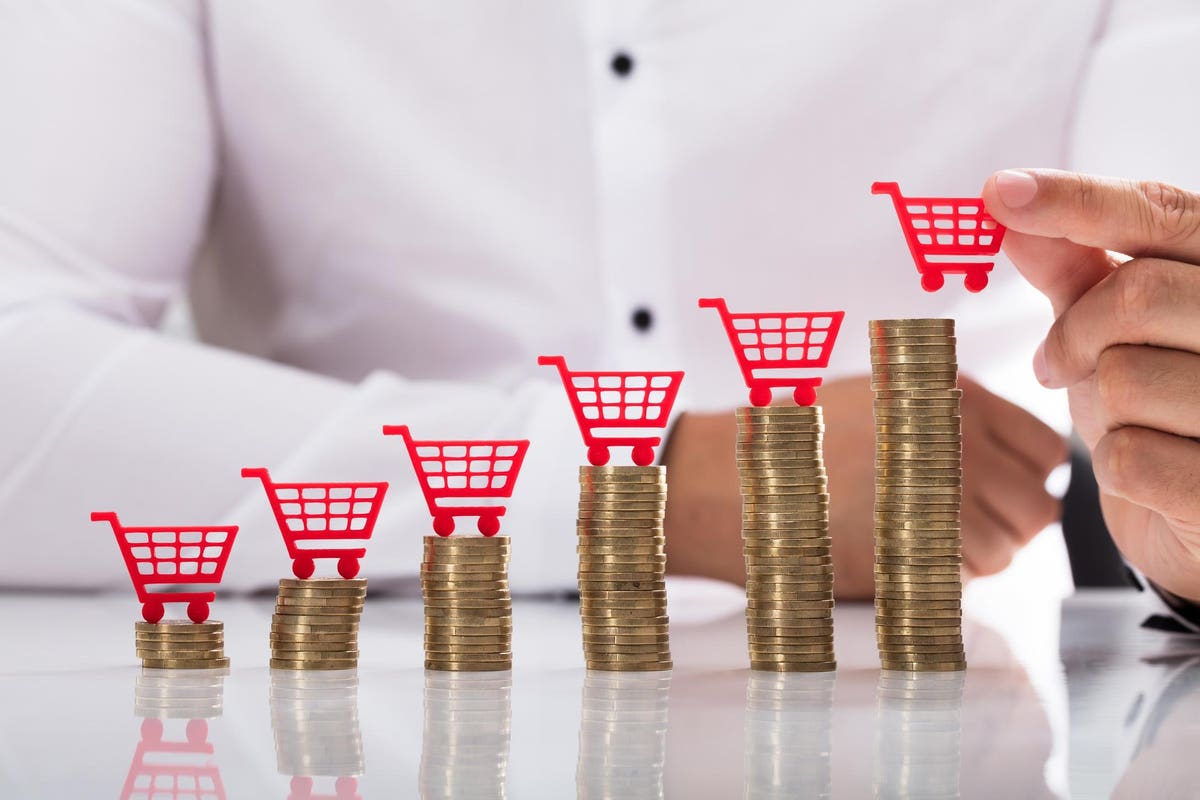 Federal Reserve Chairman Jerome Powell remains widely respected by the retail community, but when he talks about 2% inflation, there are many who believe the number is unrealistic. There are seven ways to demonstrate that 2% doesn’t compute. Some say that it’s a sugar high from the recent $1,400 dollar cash distribution, or the freedom granted by vaccination. Some say it could be the on-going unemployment checks – but no matter how you look at it, there are some seriously long lines are forming outside luxury retailers and prices for fashion items are skyrocketing. Have we pumped too much money into the economy?

Chairman Powell said that a rise above 2% inflation would indicate “pressures that are likely to be temporary – as they are associated with the reopening process.” However, retailers who live in the trenches say that costs have increased dramatically and they can’t easily tap them down. The seven ways in May are:

#1 The majority of fashion product still arrives from China, and the Chinese Yuan (RMB) has revalued against the dollar. Today, ex-factory cost prices are about 8% higher than they were a year ago.

#2 There are serious concerns about purchasing items from the Xinjiang area of China, or from Myanmar (because of the Military coup), or from India (because of the on-going COVID crisis). Global options to source product have become limited, and China still remains the number one source – even with increased pricing.

#3 Factory and raw material prices have grown dramatically (along with demand).

#4 Inbound freight costs to America have skyrocketed – (in most cases by more than 300%). Container shortages continue, and the U.S. West Coast Ports are severely backlogged.

#6 The numerous retail bankruptcies from 2020 are over, but new owners are demanding longer payment terms – which has squeezed already tight credit markets.

#7 Workers are hard to find, and employers are paying more to run their operations, or they are expanding overtime, or they are cutting back their working hours.

All of the above – point to price increases and significant inflation for fashion. While Fed speak is great, people who follow fashion – say that Chairman Powell’s goal of 2% inflation is simply not achievable, and they directly point to a Fed in denial. Prices have already breached the containment wall and there is nothing short-term about them. Fashion prices are historically reminiscent of the famous shirt maker who once said that it was “fifty cents to add a pocket and twenty-five cents to take it off” or, in the parlance of childrenswear, as the price of a “Twosie” becomes a “Onesie” we know we’re in trouble.

When Jimmy Carter was President, we had fashion inflation. As an example, during that period – we recall a street-vendor selling I LOVE N.Y. tee shirts in Times Square, posting his prices on a cardboard box. For years, he sold five I LOVE N.Y. shirts for $10, but by year two (under Carter), it was three shirts for $10, and by year four it was one shirt for $10. Inflation, using the I LOVE N.Y. example, is simply paying more and getting less – because the dollar has declined, and your purchasing power has been reduced.

After Chairman Powell spoke on April 28th about holding the line at 2% over time, it wasn’t surprising to hear Warren Buffet quickly contradict the statement when he said: “We are seeing very substantial inflation. We are raising prices. People are raising prices to us and it’s being accepted.”

The Biden Administration wants to tamper down the inflation talk, probably because they are interested to have Congress spend an additional $2.3 trillion on the proposed American Jobs Plan (AJP infrastructure bill), and another $1.8 Trillion on the American Family Plan (AFP). These suggested expenditures follow the recently $1.9 trillion American Rescue Plan (ARP). So, it was not surprising when Treasury Secretary Janet Yellen (a former Fed Chair) spoke out about this, and then quickly reversed her comments. Her original statement was: “It may be that interest rates will have to rise somewhat to make sure that our economy doesn’t overheat. Even though the additional spending is relatively small relative to the size of the economy, it could cause some very modest increases in interest rates.”

Even Republican Liz Chaney entered the fray – when she expressed her concern about: “runaway spending that threatens a return to the catastrophic inflation of the 1970’s” (aka Carter era).

It would appear that in-spite-of reasonable evidence to the contrary – the Biden Administration is committed to a “wait & see” attitude towards raising interest rates or capping federal spending, by allowing themselves to closely watch the unemployment numbers and hope that they might improve. In the interim, Administration officials will label any spike in prices as a “temporary result” related to COVID’s aftermath. It’s almost as if the government was putting Groucho Marx back on the air with his TV Show “You Bet Your Life” with participants waiting for the secret word: INFLATION to be said out loud. Then, of course, like in the original TV Show – a rubber duck would magically fall from the sky (like the Chinese rocket that crashed into the Indian Ocean).

Most Americans will remain calm about inflation talk (unless the price of gas shoots up dramatically). However, it was a bit of a wake-up call when the employment numbers were released last Friday. The 266,000 new jobs for April were really a poor showing, and were hurtful for retail – because the April employment figure was actually lower than the March report by 15,000 jobs. In addition, when the retail count is compared to a more normal time (like April of 2019), the number is actually down by 413,000 jobs. Given that one in four American jobs are directly or indirectly related to the retail community, this is quite troubling for the economy.

In terms of going back to work, many unemployed freely admit that the warmer weather is now arriving and they would rather receive unemployment checks while enjoying the outdoors, versus working indoors and being exposed to other people. Some of the unemployed have COVID concerns (like childcare), and some have left the workforce altogether. President Biden’s spin on the extra unemployment benefits was delivered with a homespun quote about the desire to work – from his dad who said: “Joey, it’s about your respect, your dignity, your place in the community.”

However, Neil Bradley, EVP & Chief Policy Officer of the U.S. Chamber of Commerce, also stated on Friday that with the Chamber’s analysis, one in four American workers receive more from unemployment than they did when they were employed. The Chamber has called for an end to the $300 weekly supplemental unemployment benefit and some States (like Montana and South Carolina) have quickly decided to act on that premise. Many in Congress and also pursuing that same thought – from a federal perspective.

President Biden is clearly taking a long-term approach to the short-term unemployment numbers, but others are quick to jump on the stage and express their provocative view that the federal government is paying employees not to work – at a time when employers are having trouble hiring. Employers are offering higher wages, signing bonuses, and even extra benefits to get people back to work which, of course, is a perfect condition to foster inflation.

We also note that there is a shortage of lumber and of steel. The price for diapers is up 10%, the housing market is up 12%, and you can’t easily get (or afford) a rental car or even find a used car. To make matters worse, the price of chicken wings is soaring.

For the retail clothing, accessory, and footwear industries, everyone understands that the inflation rule is witnessed daily from the bottom of Maslow’s triangle. As prices go up, sales will go down, and eventually – jobs get lost. All this was true when Jimmy Carter was President, and it remains true now.

Everyone in retail is pleased to see the economy bouncing back so fast, and no one wants to be negative. But, many have viewed this movie before and alarm bells are starting to ring. Fashion retailers have experienced one of the worst years in their business lifetime and are absolutely thrilled to see people shopping. Their main concern is that they are on the front line of prices rising, at the same time that the Fed is talking about 2% inflation and jobs remain hard to fill. The industry sees significantly higher inflation rates, and many find this both disconcerting and hardly short-term.

While analysts are never totally certain about which policies work the best for the fashion industry, economists are looking to the Biden Administration and wondering about any correlation to the wisdom of Groucho Marx – who might have mused about current federal guidelines: “These are my principles, and if you don’t like them…well, I have others.”