Romans Choose From a Crowded Field to Run a Chaotic City 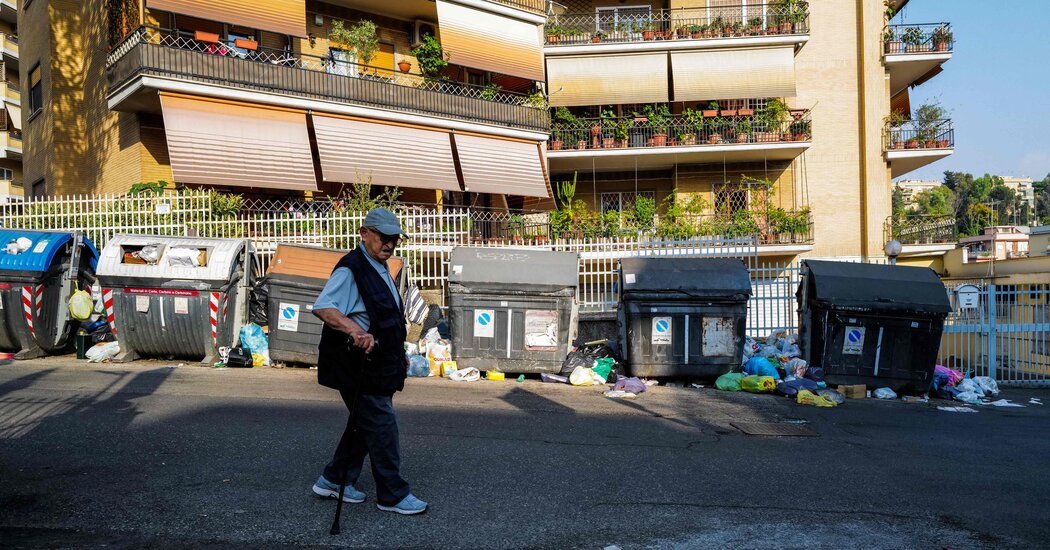 ROME — In the five years since Virginia Raggi became mayor, Rome has had some problems. Garbage has piled up on sidewalks, attracting swarms of sea gulls and crows. A pothole epidemic has riddled city streets. Public buses, already unreliable, have started combusting. And the city’s Christmas tree has looked so sad that Romans nicknamed it “Mangy.”

Now, in the days leading up to Rome’s mayoral election on Sunday, the city’s newspapers, frustrated residents and a long list of candidates jostling to replace Ms. Raggi have attacked her on an issue that they say encapsulates just how uncivilized it has become: marauding packs of wild boars. Her critics call them “Raggi’s Boars,” swapping viral videos of pigs in Roman dumpsters.

“If we want to make a zoo, we are on a good path,” Carlo Calenda, one of the candidates running against Ms. Raggi, said on Italian television.

The perceived weakness of Ms. Raggi has drawn 21 opponents across the political spectrum. The main challengers in her re-election bid include a conservative lawyer and two center-left politicians with national profiles. But fringe characters, including “Dr. Seduction” and a Gladiator re-enactor who calls himself “Nero,” have also jumped at the chance of replacing Ms. Raggi, who trails badly in the polls.

Local Italian elections, especially in the major cities, are often considered bellwethers for the broader national mood. Ms. Raggi’s landslide victory in 2016 as the candidate of the anti-establishment Five Star Movement anticipated Five Star’s success at the 2018 national elections.

But Five Star’s popularity has plummeted, and Italy is enjoying a rare period of political stability under Prime Minister Mario Draghi, an independent, stripping Rome’s election of such broad ramifications this time around. Winning here is still seen as a measure of strength of the national parties, but this time, municipal issues — traffic, trash and unwanted wildlife — have come to the fore.

It is unlikely that any candidate will win a majority of the vote when polls close on Monday, prompting another round of voting and possibly weeks of horse trading that could very well turn Ms. Raggi into a power broker.

But she is not conceding anything and has campaigned vigorously in the closing days. She blames the larger region of Lazio, which includes Rome and is run by the center-left Democratic Party, for all of the trash and invasive species. After a stint on Rome’s City Council, and pledging, according to her party’s original rules, that she would never serve more than two terms in public office, Ms. Raggi now argues that five full years running the city is not enough time to change Rome.

A full decade, she says, will do the trick.

Romans do not seem so sure. The latest polls favor Enrico Michetti, a lawyer and last-minute candidate supported by several center-right parties and by the far-right leader Giorgia Meloni, who is Roman and has a significant base. Mr. Michetti has gained attention for his knack of ducking the news media (Italian reporters call him “Houdini”) and speaking largely about ancient Rome when asked about modern-day problems.

“When Caesar died, it looked like everything was over,” Mr. Michetti said in July during a rare appearance in an electoral debate when asked about his idea for the future of Rome. “But then Caesar Octavian Augustus put institutions in the center.”

In a telephone interview on Friday, Mr. Michetti defended his talk of Rome’s glory days, which he described as a time of civic-minded governance. “Rome would never have built the pyramids; too much effort in the interest of one individual,” he said. “Instead, Rome built bridges, roads, aqueducts, theaters — anything to serve the collective well-being.”

Mr. Michetti is trailed by Roberto Gualtieri, the candidate of the center-left Democratic Party. Mr. Gualtieri was Italy’s minister of economy and finance from 2019 until early this year, and before that, he was the chairman of the Economic Affairs Committee in the European Parliament. A historian partial to gray suits, he has emphasized his competence and expertise as a contrast to what critics consider Ms. Raggi’s ineptitude.

“Rome can have a rebirth,” he said in a telephone interview, “after the bad administration of these years.”

Mr. Gualtieri has campaigned, sometimes with a guitar to liven things up, on the promise to turn Rome, where it often takes roughly forever to get anything done, into a “15-minutes city” where residents can quickly reach any service.

But in a familiar dynamic in Italian politics, the center-left vote is split. One of Mr. Gualtieri’s rivals is Mr. Calenda, who was once the country’s economic development minister and who now sits in the European Parliament. A former member of the Democratic Party, Mr. Calenda broke with the party to protest an alliance it made with its former enemy Five Star, which he loathes.

Mr. Calenda has been more full-throated in his critique of Ms. Raggi, calling her administration “an apocalypse” and “a cosmic disaster,” and seizing on Rome’s reputation as an ungovernable city to argue that only a proven manager like him could get it under control.

He said he would spend the first year and a half of his administration fixing the “decorum” of Rome’s streets, focusing on basic services like garbage removal and attending to trees to prevent falling branches from crashing onto cars.

He also rejected the speculation of political insiders that, if necessary, he would form an alliance with Mr. Michetti. “I have never heard him say anything intelligent, not even anything normal,” Mr. Calenda said of him.

Lorenzo de Sio, the director of the Italian Center of Electoral Studies, said the number of candidates running made the election difficult to call.

Many Romans have become so accustomed to blaming Ms. Raggi’s incompetence for the city’s travails that her very name — “La Raggi,” they say — has become a shorthand for everything that is wrong in the city.

But many Romans were once captivated by Ms. Raggi, the first woman to hold the office and, at 37 when she took office, Rome’s youngest mayor. She campaigned on promises to break the city’s special interests and make it work for everyone, an appeal that worked especially well in the city’s outermost and least affluent neighborhoods.

Many of those voters remain undecided, and candidates like Mr. Michetti and Mr. Calenda, who visited every Roman neighborhood, have sought to woo them. But even at this late hour, Ms. Raggi’s supporters are hopeful that they would eventually come home to her.

On Friday morning, a small group of supporters joined Ms. Raggi at a neighborhood market where the mayor inaugurated a municipal food bank for residents struggling to make ends meet. It is the fourth such center to open in Rome since May 2020, a pet project of the mayor’s, as the number of people needing assistance has soared during the pandemic.

She arrived to applause and made some remarks. Her supporters complained that despite the mayor having opened kindergartens and gyms and improved parks in the neighborhood, “all people talk about is the boars.”

But as Ms. Raggi left, another woman complained to her about how filthy her street had become. The mayor, she said, had furious taxpayers to answer to.

Ms. Raggi blamed the problems on what she called corrupt transportation and sanitation agencies. Previous administrations had swept the dirt under the rug, she said, “but when you lift it up, mounds of mud emerged.”