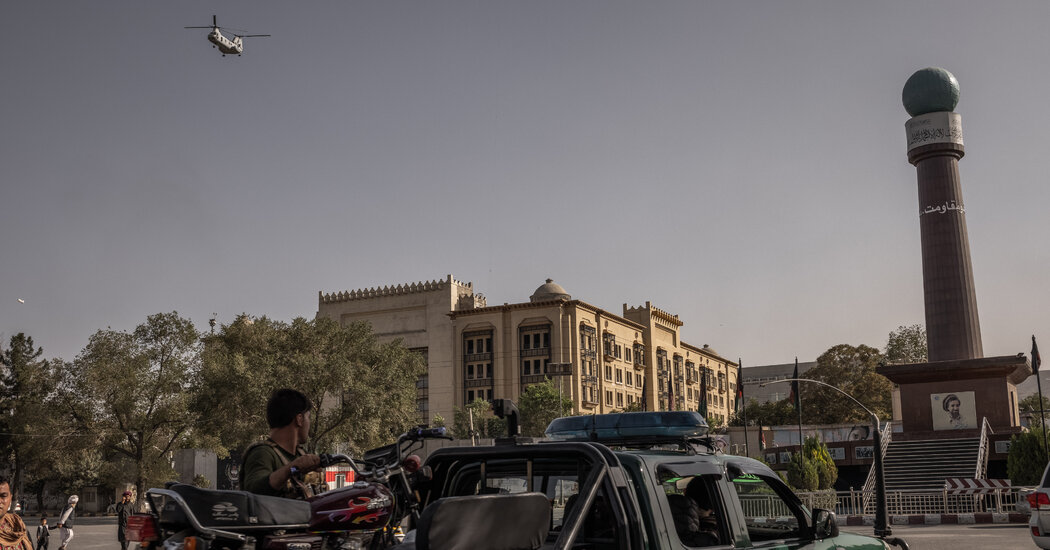 WASHINGTON — There was gunfire at the airport and a dire warning from the State Department to shelter in place as the United States began the frantic evacuations of Americans and Afghan allies from the Afghan capital, Kabul, after it fell to the Taliban in one harrowing weekend.

In the end, even the evacuation of what one Defense Department official estimated could be 20,000 Americans and an untold number of Afghans somehow managed to reflect the story of the entire 20-year war: a disconnect between American diplomats and the reality on the ground.

That disconnect has been clear as a series of administrations presented a succession of optimistic prognoses: The Taliban were in retreat, the Afghan military was on the brink of assuming control of the country, and the government in Kabul was one step away from being able to provide security across the land. In the last four months, as U.S. troops packed up and left the country under orders from President Biden, administration officials said the staff at the American Embassy in Kabul and State Department headquarters in Washington hung on to hope that their presence in the country could instill some backbone in the Afghan government.

That didn’t happen. On Sunday, American C-17 transport planes bringing in Marines — some 200 per load — landed at Hamid Karzai International Airport, then quickly filled with embassy staffers and returned to the skies. Urgent texts and emails from Americans stranded in Kabul flooded inboxes in Washington.

“We’re certainly mindful of the fear and uncertainty people must be feeling,” said John F. Kirby, the chief Pentagon spokesman. “One of the military’s greatest abilities is to establish order where there is no order, and that’s what we’re trying to do.”

Late on Sunday, a State Department spokesman confirmed that all embassy personnel had been evacuated from the compound.

“All embassy personnel are located on the premises of Hamid Karzai International Airport, whose perimeter is secured by the U.S. military,” the spokesman, Ned Price, said.

For weeks, Pentagon and military officials warned the White House and the State Department that the longer the Biden administration waited to order a drawdown or full evacuation of American personnel from Afghanistan, the more difficult the operation would be.

Secretary of State Antony J. Blinken told CNN on Sunday that ensuring the safe evacuation of Americans was “job No. 1” and said the Biden administration was “doubling down” on efforts to help Afghans who had worked for the U.S. government. He bristled when asked why the United States was not better prepared for the evacuations, particularly for Afghans who face Taliban threats for having allied with the United States.

“We have been working this from Day 1, we had to put in place an entire system to deal with this,” Mr. Blinken said. “Unfortunately none of that work was done when we came in, and we had to put that in place.”

Administration officials sought to balance the military’s logistical requirements against the impact that any hasty or dramatic withdrawal of American embassy personnel would have on the Afghan military’s effort to blunt the surging Taliban offensive.

Ordering an evacuation too early could deal a psychological blow that would speed the collapse of Afghan forces and the government in Kabul. But wait too long, military officials warned, and the administration faced a frenzied rush to evacuate thousands of civilians in what would become a bottleneck at the airport, the main lifeline to the outside world.

“Beginning an evacuation contributes to the downward spiral as there’s nothing more symbolic of the U.S. loss of confidence in the Afghan government than closing its embassy,” said Laurel E. Miller, a former top State Department official who worked on Afghanistan and Pakistan diplomacy during the Obama and Trump administrations. “Once you break the glass and pull the fire alarm, there’s no going back.”

Karl W. Eikenberry, a former top commander of U.S. forces in Afghanistan and a former U.S. ambassador to Kabul, put it this way in an email on Sunday:

“Evacuation of an embassy can be interpreted locally and internationally as abandonment, akin to a military unit fleeing from its position under enemy pressure,” he said. “But at the same time, there is an overriding obligation to protect U.S. Embassy staff and citizens from harm. The Taliban advance was so stunningly rapid, I expect it was difficult to balance these competing demands.”

Meanwhile, at the Pentagon, Defense officials said that 3,000 Marines and soldiers were on the ground in Kabul as of Sunday night to help with the evacuation, and another 3,000 were en route.

Tension had been building between the Kabul Embassy and the Pentagon, the officials said, with Pentagon officials urging a smaller footprint and the State Department seeking to keep a robust presence. During meetings and video conference calls, Pentagon officials reminded their diplomatic counterparts that American troops were leaving.

Three weeks ago, as Afghan cities began to fall to the Taliban, Defense Secretary Lloyd J. Austin III extended the deployment of the amphibious assault warship U.S.S. Iwo Jima in the Gulf of Oman so that it would be close to the region. One week after that, he ordered the Marine expeditionary unit on the ship — some 2,000 Marines — to disembark and wait in Kuwait so that they could more easily deploy to Afghanistan.

On Sunday, the military evacuated 500 people, officials said, adding that they expected that number to go up to 5,000 a day in the coming week.

All U.S. embassies overseas have emergency evacuation plans, but Kabul posed significant hurdles. First, with some 4,000 employees, the embassy is one of the largest in the world. Shutting it down and destroying any sensitive documents and other materials takes time. Second, given that the Taliban control border crossings out of the country, the evacuation has to be done entirely by air, officials said.

Thousands of others, including dual citizens and U.S. contractors, are also in the country.

Embassy officials urged American citizens who are still in Afghanistan to shelter in place and resubmit paperwork to request help to leave instead of showing up at the airport, given reports of gunfire there.

The first elements of troops assigned to the region were on 72-hours’ notice to land in Kabul in an emergency to help speed and secure the evacuation. But the Biden administration held off, with officials believing they had more time to act.

“I suspect those on the ground were afraid that our emergency departure would be a huge psychological blow to our Afghan partners and appear to be the kind of Saigon moment that would be domestically damaging, as well. So they held off,” David H. Petraeus, the retired general who commanded the international forces in Afghanistan from 2010 until he was appointed C.I.A. director the next year, said on Sunday.

“But the Afghans were already staggering in the face of numerous simultaneous actions all around the country without U.S. air power to help them out,” he said. “And once different leaders saw others capitulate, they did what survivors do — sought to cut a deal.”

Ms. Miller pushed back on the criticism that the evacuation of American embassy personnel was mishandled.

“Doing it rapidly doesn’t necessarily mean it’s being executed badly,” she said. “You can’t really do it slowly. If they did it weeks ago, the U.S. would have been complicit in hastening the collapse of an Afghan government it was trying to support, before collapse was certain.”

As recently as July 24, Mr. Austin voiced cautious optimism that a nascent Afghan strategy to reconsolidate defensive positions around important cities still in government control, along with limited U.S. airstrikes, could enable Afghan forces to hold the line.

“The first thing to do is to make sure that they can slow the momentum and then — and then be able to put themselves in a position where they can retake some of the ground that they’ve lost,” Mr. Austin told reporters traveling with him. “We’ll see what happens.”

A week later, a senior U.S. official conceded that the White House had badly misjudged the implications of the American troop withdrawal — largely completed around the July 4 weekend — on Afghan morale, security conditions and the ability of the U.S. government to evacuate Afghan interpreters who had helped the U.S. military, and their family members. About 2,000 Afghans have landed in the United States in the past two weeks, the State and Defense Departments said Sunday evening. Many of them were taken to Fort Lee in Virginia to finish their visa processing before being resettled permanently elsewhere in the country. Thousands more are stuck in a bureaucratic morass after applying for special visas.

As security deteriorated rapidly last week, the Pentagon and State Department quarreled over how much time the embassy had left before the capital might be overrun. On Thursday, a senior military officer said that no official assessment was pessimistic enough, and that the window for any semblance of orderly departure was vanishing fast.

Even in announcing last Thursday that the Pentagon was sending 3,000 Marines and soldiers to Afghanistan and an additional 4,000 troops to the region to evacuate most of the American Embassy and U.S. citizens in Kabul, Biden administration officials said they still had time.

“We’re not classifying this as a noncombatant evacuation operation,” Mr. Kirby, the Pentagon spokesman, told reporters on Thursday, eschewing a politically charged term, NEO, that is associated with failed missions. “We are, as I said, at the very beginning, this is a very narrowly focused temporary mission to facilitate the safe and orderly departure of additional civilian personnel from the State Department” as well as Afghan visa applicants.

But early Sunday, a NEO is exactly what was underway. A senior military official monitoring the situation in Kabul said the administration was now simply trying to “buy time and space to complete the NEO and get our folks out.”