Russian Journalists Meet a Crackdown With Dark Humor, and Subscribers 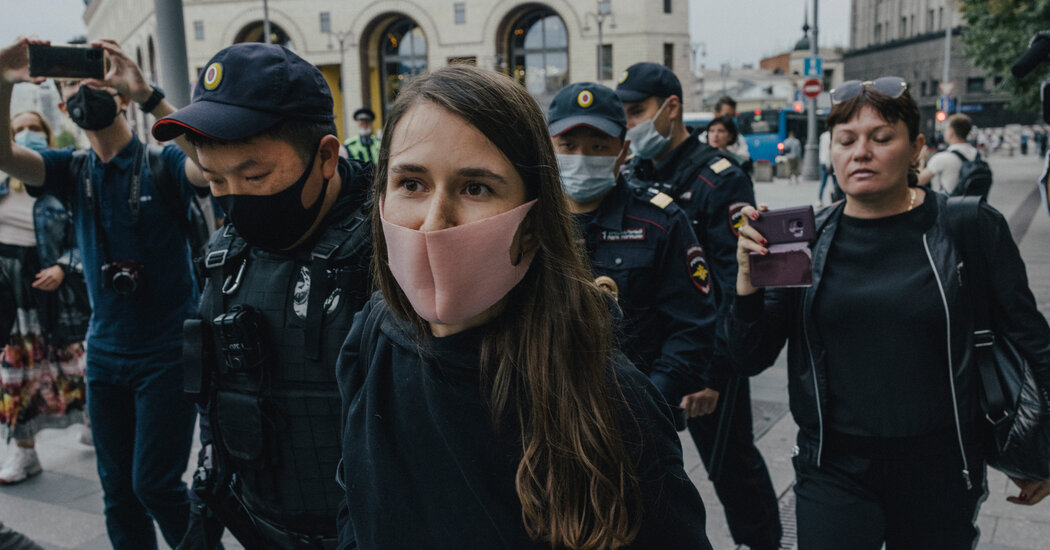 Sonya Groysman, a 27-year old journalist in Moscow working for the independent news site Proekt, was a fan of those shows, and so when she and her colleague Olga Churakova ran into trouble, it seemed natural to start recording. But the problems they’ve discussed in that familiar format are terrifying and existential. Last month the two women were placed on the Russian government’s list of “foreign agents,” a designation that threatens to end their careers and, if they fail to fill out reams of paperwork and attach a 24-word disclaimer even to personal social-media posts, could mean heavy fines and jail time.

So their podcast is called “Hi, You’re a Foreign Agent.” The first episode begins with Ms. Groysman stumbling, laughing, through the disclaimer, which translates as: “THIS NEWS MEDIA/MATERIAL WAS CREATED AND/OR DISSEMINATED BY A FOREIGN MASS MEDIA PERFORMING THE FUNCTIONS OF A FOREIGN AGENT AND/OR A RUSSIAN LEGAL ENTITY PERFORMING THE FUNCTIONS OF A FOREIGN AGENT.” In another episode, Ms. Churakova tries and fails to get a job at a fast-food chain specializing in blini after explaining her new status.

Ms. Groysman and her co-host aren’t asking listeners for money to support the podcast, she said, because she’s worried that her use of something like the American crowdfunding platform Patreon could be misconstrued and held against her. The podcast, she said, is simply their way of staying “on assignment.”

In February I wrote in this space about the unlikely flowering in Russian online journalism over the past year. In a country where, essentially, every major television broadcaster is a highly produced, pro-government analogue of Fox News, a number of digital outlets have delivered riveting scoops. They exposed the family wealth of President Vladimir V. Putin and reported on the agents who poisoned the opposition leader Aleksei Navalny.

It was all part of a global wave of unflinching journalism in unfriendly places — the Afghan press was, until last week, the freest in its region — where autocrats have increasingly viewed reporters as a threat. This summer, the Russian government has tried to stop the wave by designating its highest-impact critics as “undesirable,” or as foreign agents, or both.

The founder of the news site Proekt, which translates as Project, left the country. The independent business news site VTimes shut down. Last Friday, the government added to its list TV Rain, long a top independent outlet, and the news site iStories. And Ms. Groysman was arrested Saturday protesting the move and detained for five hours; she recorded the encounter for the next episode of “Hi, You’re a Foreign Agent,” coming Tuesday.

The “foreign agent” designation has practical consequences, including effectively driving away business partners. It also forces journalists to attach the 24-word disclaimer to their work, even their personal social media posts. And it comes with echoes of a dark, Stalinist past.

“This immediately transfers you into the 1930s,” said Ivan Kolpakov, the editor in chief of the news site Meduza, whose audience of more than 10 million a month has made it the fattest target of the crackdown. “Yesterday you were a respectable journalist from the most popular independent media outlet. Today you are a marginal person. It means that a lot of doors that were open immediately close down right in front of your face.”

I visited Mr. Kolpakov in Meduza’s new office — a crowded walk-up apartment overlooking a courtyard on a side street near the center of the Latvian capital. The site’s co-founder and chief executive, Galina Timchenko, is paying the rent personally. I was there because, while many of the crackdown’s targets are drawn from a new wave of small, grant-funded online investigative outlets, Meduza is something different.

Founded in 2014 in Riga by journalists who had left another popular site after it lost its independence, Meduza began as a resolutely commercial, advertising-based business, a not-so-distant cousin to the American news sites that got their start at roughly the same time.

The nationalist activist who campaigned to label it a foreign agent, Aleksandr Ionov, had relied on thin evidence — a podcast that had been sponsored by Latvia’s tourism agency, for instance — to claim it was backed by outsiders. With 1.3 million followers on Twitter, almost a million followers on Instagram, and nearly 450,000 followers on Telegram, Meduza had annual revenue of more than $2.5 million before its designation, on April 23, as a foreign agent, Mr. Kolpakov said.

In a week, Meduza lost more than 95 percent of its advertisers. Mr. Kolpakov and Ms. Timchenko told the staff during a glum Zoom meeting that they saw no real way forward. Reporters and editors were furious — and demanded that they “fight to the end,” said Tatiana Ershova, Meduza’s editorial director. So they launched a last-ditch appeal, asking readers for money to “save Meduza.” To protect skittish donors, they even accepted cryptocurrency and didn’t require that supporters leave email addresses, though many did.

The campaign also sought to flip the “foreign agent” label from a designation with sinister undertones into something readers could laugh about. “Become a summer agent,” one ad said. An Instagram post suggested you tag your “foreign-agent crush.”

The result is one of the most effective campaigns of its kind. Meduza has signed up more than 90,000 donors. The journalists were stunned to feel “really loved and needed that people want to read their stories,” said Katerina Abramova, the site’s director of communications.

Mr. Kolpakov declined to specify how much money they’ve raised, saying, “We think that any detailed information can be used against us by the state.” The publication still had to cut about 40 percent of its costs and moved from a bright new office to its current digs. But Meduza remains online — and while much of the staff has settled into a kind of exile in Riga, some of its reporters continue to report from Moscow, even as official sources have cited the “foreign agent” designation as a reason to stop talking to them.

The question now hanging over Meduza and the other independent sites is whether the government will try to block access to them within Russia. “They will block us one day, probably sooner rather than later,” said Roman Badanin, who was Ms. Groysman’s boss at Proekt. Until then, he added, he is in California, planning to relaunch Proekt under the name “Agenstvo,” in a nod to his shaky legal status.

Mr. Ionov, the nationalist activist who has led the crackdown, said in an interview that he was “not upset” about Meduza’s crowdfunding comeback. In fact, he took some credit. “I didn’t even ask them to give me a percentage,” he said on Friday, soon before posting an “Empire Strikes Back” meme to his Telegram channel in celebration of the latest additions to the growing list of undesirables.

Mr. Ionov, who founded the Anti-Globalization Movement of Russia and has championed California’s secession from the United States, said that the Russian law restricting critical news outlets is simply its own version of the American Foreign Agents Registration Act, which requires disclosures from people acting on behalf of foreign governments. The U.S. government pressed the Russian state television outlet RT to register as a foreign agent in 2017, offering the Russian government a pretext to target both U.S. government-backed Radio Free Europe/Radio Liberty, which is fighting the designation in Russian court, as well as a wider range of critics with weaker ties to any foreign government.

While most of the pressure on journalists in Russia seems to stem from the government’s fear of Mr. Navalny, the imprisoned activist, in advance of next month’s parliamentary elections, the American investigations of Russian influence on the Trump administration also offered a useful pretext. On the ground, however, the main effect has been to make it harder for Russians to see their own country clearly, and for journalists to report on it — or even remain there.

One Meduza reporter, Kristina Safonova, filed a complaint this year that an officer had hit her with a baton during a protest she was covering. After Meduza was labeled a foreign agent, she said, she learned that the police investigation would focus on her: She had been practicing journalism without a license, an official told her, and Ms. Safonova, 27, could wind up facing 40 days in jail and a fine of about $4,000.

She left for Riga a few days later.

“I didn’t expect it to happen so fast,” she said of her transformation from a young reporter to one of the growing number of Russian journalists effectively in exile.