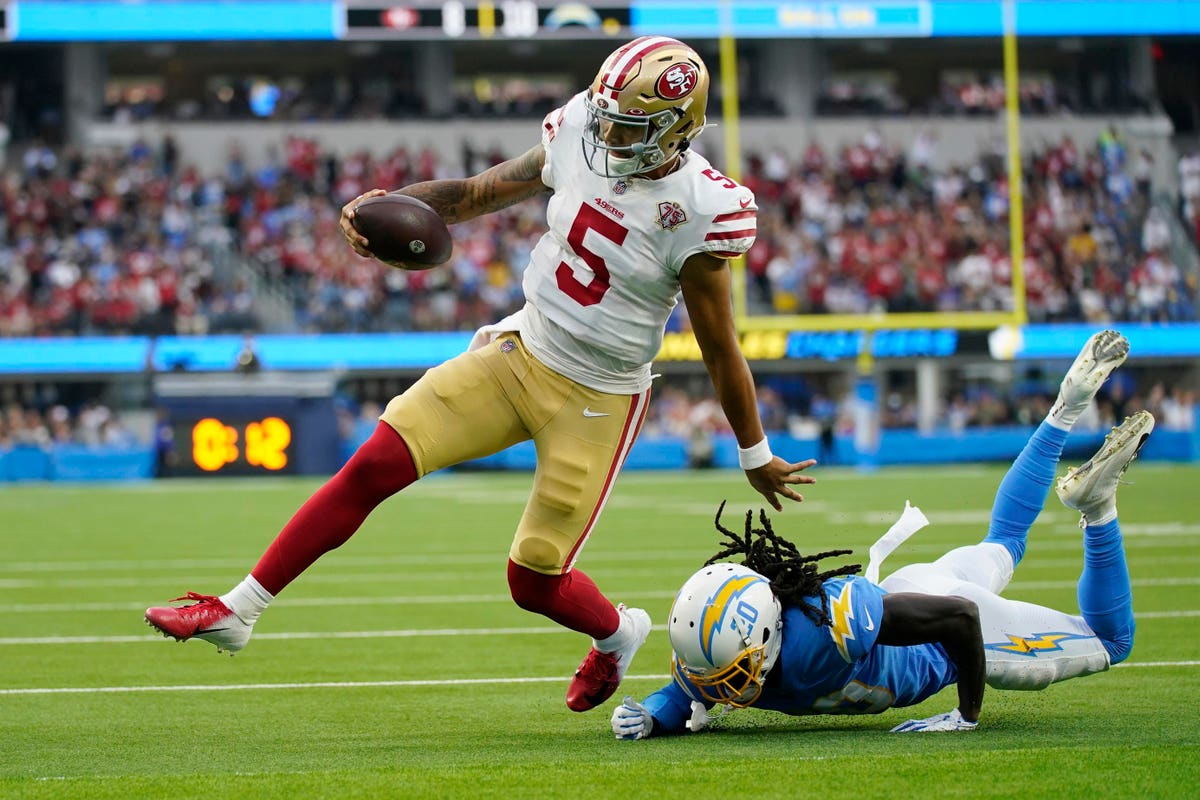 The plan for head coach Kyle Shanahan and Co. was to get Garoppolo back in the game after a couple series from rookie No. 3 pick Trey Lance. However, a 16-play opening drive that culminated in an ugly Garoppolo interception changed these plans.

Lance would ultimately finish out the first half and play a good chunk of the third quarter before being replaced by Nate Sudfeld.

As with Garoppolo, Lance also threw an ugly first-half interception. After those initial struggles, the talented young quarterback picked it up big time. That included a 75-yard touchdown-scoring drive in less than a minute to conclude the first half.

All said, Lance completed seven of his final nine passes, including two touchdowns, after starting the game 1-of-5 passing. On the other hand, Garoppolo completed a mere 3-of-6 passes for 15 yards and that ugly interception.

Following the game, 49ers head coach Kyle Shanahan noted that he’s not yet ready to name a starting quarterback with just one preseason game remaining.

“No, I’m not making that announcement,” Shanahan told reporters when asked post-game about whether he’s ready to name a starter. “Nice try, though.”

This is rather significant in that Shanahan noted weeks ago that Garoppolo was the clear-cut starter over Lance and the better quarterback in training camp.

It could be preseason overreaction time. That’s especially true given that Shanahan also said Sunday evening that he’s not yet ready to declare this a quarterback competition.

“No, I haven’t seen that,” Shanahan responded when asked whether anything in the first two preseason games has changed his stance on the starting QB for Week 1. “I mean, I would love for it to be more and more each week, but I think the situation is pretty similar right now.”

So, why not just go ahead and name Garoppolo the starting quarterback? It could very well be strategic. The idea of the Detroit Lions to have to prepare for two vastly different quarterbacks could give San Francisco a competitive advantage.

However, it’s become abundantly clear on the field that Trey Lance has narrowed the gap between himself and Garoppolo. The youngster overcame some early-game struggles to lead the 49ers to two long touchdown-scoring drives. He was pinpoint with his accuracy on a consistent basis through the latter part of his appearance, including this beautiful touchdown strike to Travis Benjamin in the third quarter.

Through the first two preseason games, it’s become clear that Lance adds another element to San Francisco’s offense compared to Garoppolo. That was evident as Sunday’s game went on.

Sure there’s been some growing pains. Sunday’s interception is a prime example of that. The pass was high and behind the intended receiver. That’s the accuracy issues we’ve seen plague Lance at times during the preseason. Again, it’s to be expected from a rookie quarterback.

On the other hand, Garoppolo is entering his eighth season in the NFL. He’s still missing high and behind receivers on a consistent basis. Leaving the ball high in the middle of the field is not only a recipe to get the pass-catcher injured, it will continue to lead to turnover issues. As much as injuries have stunted Garoppolo’s growth, his lack of accuracy has also been a major problem.

Where Do The San Francisco 49ers Go From Here At Quarterback?

It now seems clear that Shanahan will hold off on naming a starting quarterback for Week 1 until after the 49ers’ preseason finale against the Las Vegas Raiders next Sunday.

There’s no reason for the head coach to pull a 180 after the comments he made following San Francisco’s first win of the exhibition slate.

From here, it’s going to be all about reading between the lines. Will Lance see action with the 49ers’ first-team offense next Sunday? Perhaps, Trent Williams and George Kittle will take to the field. Given that the rookie has yet to play with either Pro Bowler during the preseason, having them sit out the finale would likely indicate that Garoppolo is slated to start Week 1.

Even if that is the case (as expected), we can now conclude that Garoppolo will have a short leash once the regular season gets going. Lance has exceeded all expectations as a small-school product who didn’t even suit up last season.

His progression under center coupled with the issues we’ve seen surrounding Garoppolo makes this a legit quarterback competition. That’s the reality of the situation regardless of what Shanahan wants to say publicly.