Sardinian Village Tries to Save an Ancient Tree Scorched by Fire 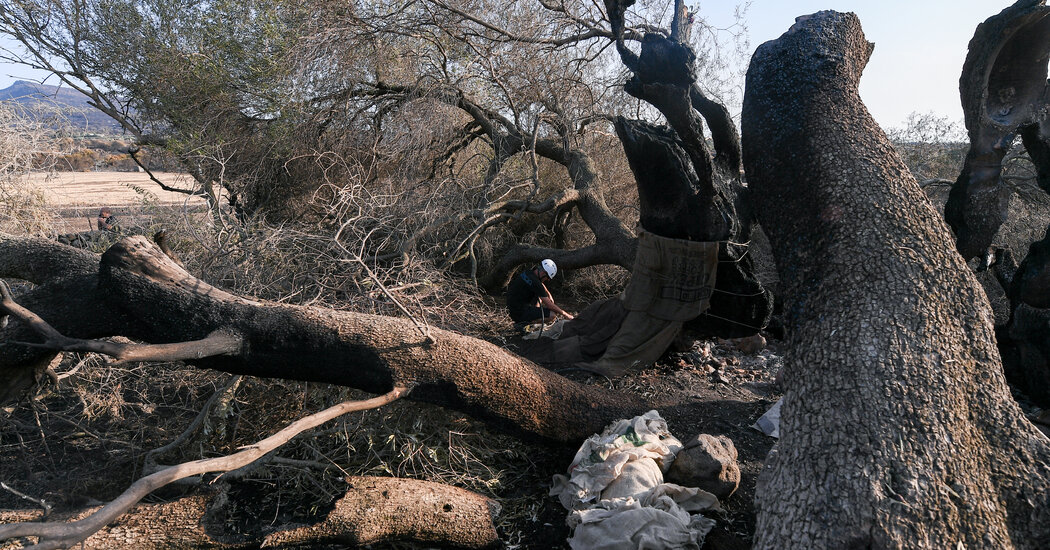 To the people of Cuglieri, a small hilltop village on the Italian island of Sardinia, the tree was simply “the Patriarch.”

Over the course of its long life — estimates of its age range from 1,800 to 2,000 years old — the olive tree became a behemoth, with a trunk 11 feet, or 3.4 meters, wide, and an integral part of an ancient landscape in western Sardinia. But after a large area of vegetation and numerous farms and villages in the region were devastated by one of the biggest wildfires in decades, time finally caught up with the Patriarch.

The ancient olive tree was engulfed in flames, and its giant trunk burned for almost two days.

In a fire that reached Cuglieri in late July, the agricultural community of about 2,600 residents lost 90 percent of its olive trees, the main source of income for most. More than 1,000 people were evacuated from the town, which is tucked between a mountain covered in cork and oak trees and the Mediterranean Sea.

Now local residents and the authorities are pinning their hopes for the survival of their ancient olive tree on Gianluigi Bacchetta, a professor at the University of Cagliari and the director of its botanical gardens, who is trying to bring the Patriarch back to life.

“The Patriarch is our identity,” said Maria Franca Curcu, who is responsible for cultural and social policies for the municipality of Cuglieri, her voice breaking. “If we can save him, we can give a message of hope to all the people who have lost everything in the fire.”

When Professor Bacchetta first visited the ancient olive tree in July, soil temperatures had reached 176 degrees Fahrenheit, or 80 degrees Celsius, because of the fire.

“We needed to create an intensive care unit for the tree,” he said in a telephone interview. “It really is a living being that underwent serious trauma,” Professor Bacchetta said. “We are going to do our best and hope that it wakes up from its coma.”

The professor and his team first watered the soil to cool it down and then protected the trunk with jute tarps and the soil with straw. A nearby village gave a water tank for the tree, and a local plumber built an irrigation system that allows the soil to retain crucial humidity.

A local construction company donated equipment and worked for free to build a structure to shade the trunk from the scorching sun, replicating the role of leaves — now gone. Every 10 days, the tree is irrigated with organic fertilizers in the hope of encouraging the tree’s peripheral roots to grow.

“If the peripheral roots restart and manage to transfer materials to the stump,” Professor Bacchetta said, “we can hope for shoots to come out in September or October.”

The professor did not stop with the Patriarch. He visited all of the centuries-old olive groves in the area, advising farmers on how to save fire-damaged plants. His team and local authorities are planning a crowdfunding effort to buy equipment to restore the olive groves and their fields.

Giorgio Zampa, the owner of an olive farm that once belonged to his great-grandfather, lost all of his 500 oldest olive trees, planted over 350 years ago.

“Mr. Bacchetta unfortunately can’t do much for me,” Mr. Zampa said, “but I believe that the work on the Patriarch will psychologically help the entire community.”

Ten of his 14 Sardinian donkeys and almost all of his cattle from an ancient, endangered breed also died in the wildfire as they sought shelter in a nearby forest, which began burning shortly after. Mr. Zampa said he would focus his business on the remaining younger olive trees and start planting new ones.

“The village’s economy got burned to a cinder like the olive groves,” he said. “The fire damaged the landscape, the economy and our incomes in an incalculable way, like nothing we had seen before.”

Wildfires are not new to the Cuglieri area. They are a relatively common summer phenomenon on the arid island of Sardinia, but generally are not as apocalyptic as this season’s. The extraordinarily high flames, propelled by strong winds from the south, reached the village’s homes and burned to ashes everything standing in between, including the cemetery’s ossuary.

In the last big fire, in 1994, the Patriarch was spared, though the flames burned some century-old trees nearby.

“In Cuglieri, we have always felt that there is something sacred about it, and that protected it from the fire,” said Piera Perria, a retired local anthropologist who first contacted Professor Bacchetta to assess the Patriarch. “None of us could imagine that it could not make it this time.”

Giuseppe Mariano Delogu, a retired high-ranking official with Sardinia’s forestry corps, said that in the past 40 years, wildfires followed the same roads on the hill and the mountain near Cuglieri, but the flames never reached the olive groves.

Although civil protection and the response to fires in the area have improved over the years, bureaucratic hurdles aimed at protecting Mediterranean scrubland means that inflammable vegetation is often not cleared, creating fire hazards, experts say. High temperatures this summer, partly because of hot winds blowing in from Africa, have intensified the risks of wildfires breaking out.

“The only way to extinguish such fires is to prevent them,” Mr. Delogu said. “Technology simply fails when the fire is so strong and so vast, regardless of how many firefighters you have, they will always struggle.”

Mr. Delogu was still hopeful for the Patriarch, though.

“They are incredible trees,” he said. “I am optimistic.”