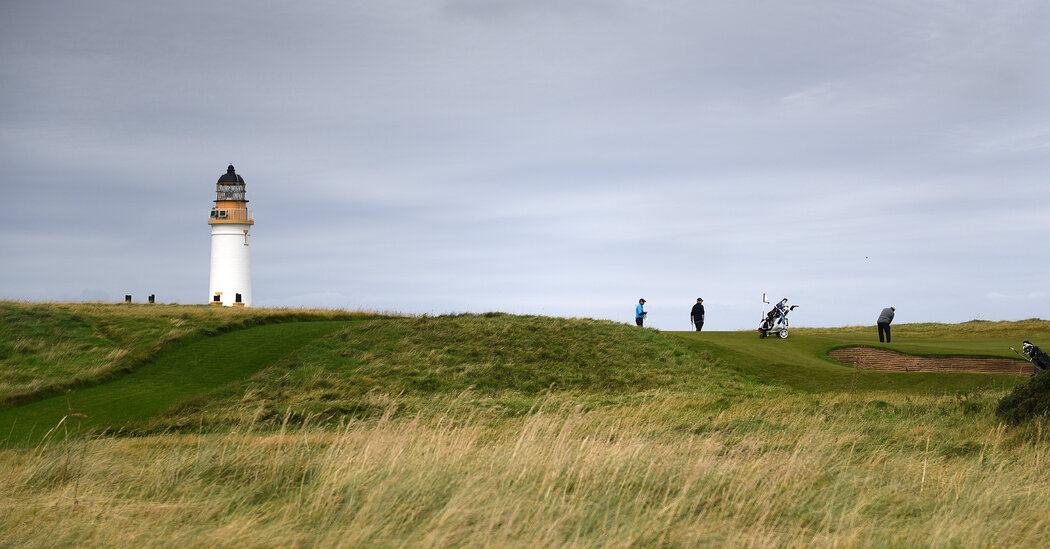 LONDON — A Scottish judge on Wednesday opened a path to a possible investigation into the purchase of Donald Trump’s two golf courses in Scotland, in a ruling that could force the former president to explain how he funded the deals.

The Scottish government had resisted pressure to demand financial details from Mr. Trump through an “unexplained wealth order,” a powerful legal instrument usually deployed against leading figures in organized crime or drug trafficking.

But on Wednesday a judge ruled that Avaaz, an online campaign group, should be given the right to challenge the government’s rejection of calls for such a move.

Nicknamed “McMafia orders,” unexplained wealth orders were introduced in 2018 to strengthen the government’s armory against organized crime. Those subject to them can ultimately be forced to forfeit their assets if they are unable to explain satisfactorily how they were purchased.

Though it remains far from clear that such an investigation will ever arise in this case, Wednesday’s court decision is nonetheless a setback for Mr. Trump, whose financial and tax dealings are under investigation in the United States.

“This was a hurdle we had to jump, and we can now proceed to the substance,” said Nick Flynn, legal director of Avaaz, welcoming the ruling.

“If you don’t think there is reasonable suspicion over these purchases then I don’t think you’ve been paying attention,” he added. “It’s the collective responsibility of Scottish ministers to act on this.”

Mr. Trump bought a golf course near Aberdeen in 2006. But campaigners have focused more of their questions on the purchase of the larger and more prestigious Turnberry property for $60 million in 2014 — a time when he was reporting substantial losses on his income tax returns. Despite the Trump Organization’s investment of nearly $300 million, none of the Scottish properties have turned a profit.

On Wednesday, Sarah Malone, executive vice president of Trump International Scotland, described the push to investigate the funding of the organization’s golf courses as “political game-playing at its worst and a terrible waste of taxpayers’ money which further damages Scotland’s reputation as a serious country to invest in and do business.”

“We have developed and operate two globally acclaimed, multi-award winning visitor destinations in Scotland and make a significant contribution to the Scottish leisure and tourism economy. This latest attempt to undermine that investment is an utter disgrace,” Ms. Ms. Malone said in a statement.

Scottish ministers initially rejected the idea of issuing an unexplained wealth order, and there was a dispute over whose responsibility it would be to authorize such an investigation. In February, Scotland’s Parliament voted against a motion, brought by the Scottish Green Party, that would have pressed for more details on the source of the Trump Organization’s money.

But on Wednesday in the Court of Session, Scotland’s highest civil court, the judge, Lord Sandison, sided with Avaaz, saying that its legal claim “had real prospects of success” and there was “a sensible legal argument to be had on the matters raised by the petition.” He also rejected Scottish government arguments that the petition had been filed too late to proceed.

The decision was welcomed by the co-leader of the Scottish Greens, Patrick Harvie, who said in a statement that he was “glad we are a step forward in getting some clarity over why Trump’s business dealings in Scotland haven’t been investigated. It should never have got to the stage of a legal challenge from a nongovernmental organization for the Scottish government to confirm or deny whether they will seek a ‘McMafia order.’”

In a statement, the Scottish government said that “it would be inappropriate for us to comment on an ongoing legal action.”