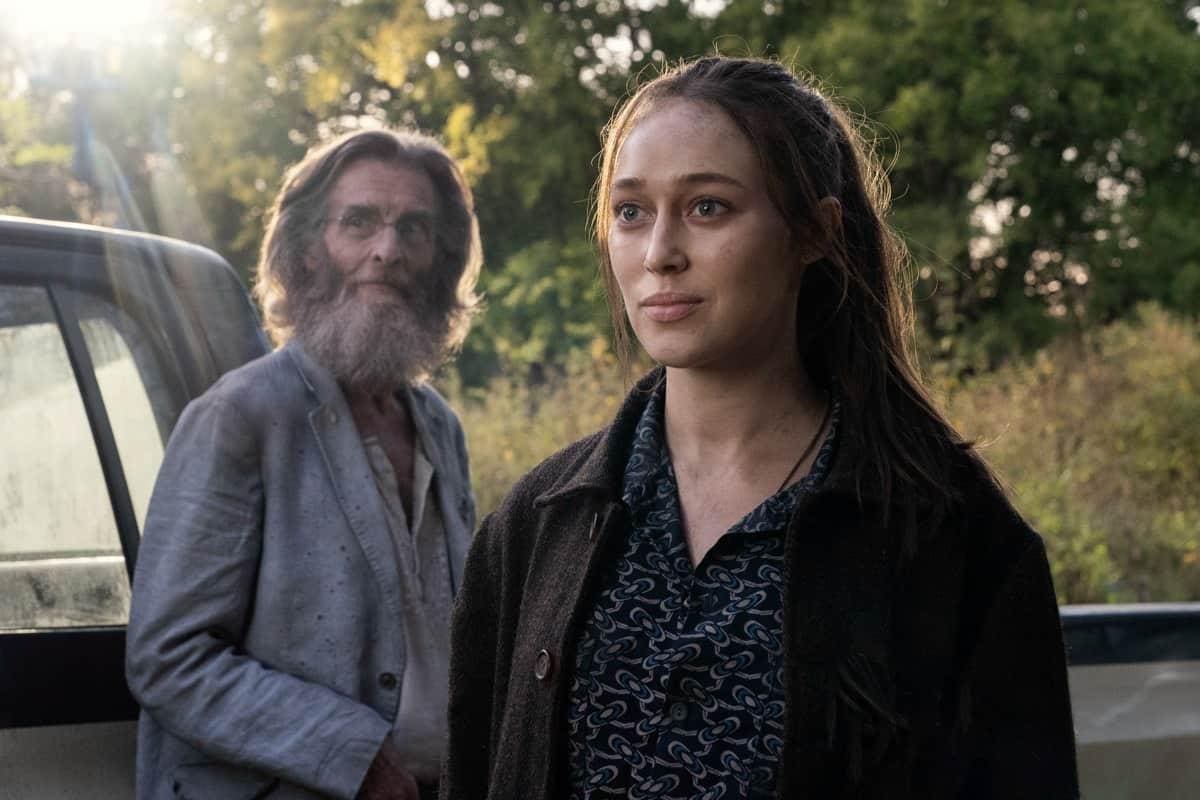 Fear The Walking Dead sort of finds new ways every week to lose the thread. It’s a show that’s almost entirely built around teasing audiences with the promise of a Madison return. The plot is secondary. The characters are tertiary. The villains are plucked from a deck of cards at random. In Sunday night’s episode we drew the Believers and then a wild card: Dakota, who randomly shows up at Believer HQ and joins Teddy (John Glover) and Alicia (Alycia Debnam-Carey) on their little journey across Texas.

The pair becomes a set when Cole shows up just in the nick of time to blow some zombies to pieces, sort of rescuing Teddy and his two female companions.

Who’s Cole you ask? Well I guess he’s one of the people from the stadium who were rescued by the bold—if mindbogglingly stupid—actions of Madison, who led the zombies into the stadium thereby saving her kids and everyone else—just not the show, which has continued to slide ever since.

Read my review of Zack Snyder’s Army of the Dead right here.

MORE FROM FORBES‘Army Of The Dead’ Review: The Good, The Bad And The UglyBy Erik Kain

He’s certainly familiar, though in a vague sort of way. We saw him in Season 4A as one of the bit characters hanging around the stadium. Then he just . . . disappeared after everything went down. Now, because Texas in Fear The Walking Dead is at once so vast you need to fly to parts of it, and so tiny that everyone runs into everyone all the time, he’s shown up at this critical moment guns blazing.

This is less egregious but certainly reminiscent of The Walking Dead’s gimmicky encounter between Rick and Morales, another long lost character from many seasons back that only the most diehard fans remembered. Morales was an unimportant, irrelevant character in Season 1 who left before the season was over and only showed up to have a ridiculous conversation with Rick. He was a Savior at this point, because clearly everyone from the Atlanta area made their way up to the Alexandria area. Yeah, that makes sense!

At least Cole and Alicia are still in the same state, even if it is one of the biggest states in the country (do you think Andrew Chambliss and Ian Goldberg understand the geography of Texas? Because I’m starting to think that they think it’s the size of Vermont).

Cole acts all nice like he’s going to help and then later he turns out to be a bandit, and there’s some other random guy (Doug, I think) who we’ve all forgotten about in his bandit group and Alicia is super bummed out that these people she hardly knows turn out to be royal pricks.

Things come to a head and Cole is about to shotgun Teddy when Alicia leaps up and knocks the shotgun away. There’s a fight and all Cole’s people are killed when some zombies show up. Then Alicia kills Cole because she’s mad that he didn’t turn out better after her mom saved him. Take no prisoners, Alicia.

This brings Alicia into Teddy’s circle of trust and he reveals his plans: The submarine has a nuclear missile onboard. It’s washed up by Galveston. They have the key and they’re going to use the missile to kill everyone. I guess one nuke can do that? Or will it set off a nuclear war and . . . hold on a second.

HOLD ON A SECOND.

Are we actually watching the prequel series to The 100? Will Teddy start the nuclear war that destroys humanity and sends the last remnants up into space? Alicia’s granddaughter, who looks just like her in some stroke of good fortune, is actually Lexa?

Okay, kidding aside, once Teddy reveals his dastardly plan Alicia takes his gun and points it at him. She’s going to kill the psycho and stop his crazy plan. But Dakota, being the wicked little brat she is, points a shotgun at Alicia’s back. Despite taking her in and showing her forgiveness and mercy, she’d rather throw in with the Believers. Alicia isn’t surprised and neither are we. Why was she allowed to run free again?

Teddy’s people show up out of nowhere and Alicia only has a minute to radio Morgan over her magical walkie-talkie, divulging Teddy’s plans just before she’s taken prisoner. They take her to a government bunker and lock her in a cell. This is the new home base for the Believers since they burned down their old one.

We have two more episodes in the season. Just enough time for Morgan and the Morganites to make it down to Galveston and find the submarine. Just enough time to have a big showdown and probably another Madison tease.

There are also some flashbacks to Teddy during his 30-year imprisonment which came to an end when the beginning happened and the beginning is the end, don’t you know? The end is the beginning also.

Oh, and the title of the episode has a double meaning! It’s a Madison tease (of course) but then they talk about Madison a lot and her legacy and how Cole squandered that. Die Cole, you bastard!

But also Teddy has some mommy issues, though the corpse he transports is nothing more than a diversion, not his real mother at all. He still sounds like one of those crazy serial killer types who has major mommy issues (see Mindhunter). I guess I would care more maybe if Teddy wasn’t randomly introduced at the end of the season after a long list of ho-hum villains that never amounted to anything ever since the new showrunners took over in Season 4.

As far as this episode goes, it was fine if you’re grading on a curve. Glover is quite good as Teddy, but they’re working with stupid Fear nonsense writing like “the end is the beginning” and the random meetup with Cole and his gang. Like the various other talented actors on this show, they’re doing the best they can with the material they’ve been given.

All told, not the most egregious episode of the season, but still part of an ultimately very silly season with even higher stakes (not just a nuclear meltdown, an actual nuke!) and nothing much to keep us watching or caring. Do we care if Teddy destroys this world? Are there enough characters left that we care about to actually give a damn? As much as I like Alicia, she’s not much of a character anymore.

What did you think of ‘Mother?’

Check out my video review of Zack Snyder’s Army of the Dead below:

Past Season 6 reviews from Yours Truly: