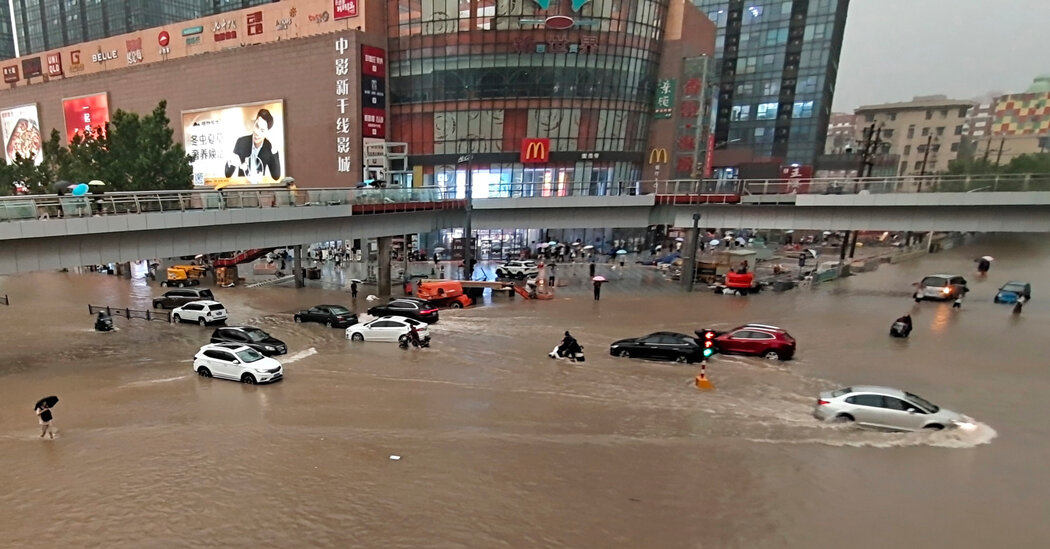 Severe flooding in central China has killed at least 12 people, including some who were trapped in the subway in Zhengzhou, the capital of Henan Province. More than 100,000 people had to be evacuated, according to state media reports.

Torrential rain that began on Sunday and continued through Wednesday was the heaviest on record in Zhengzhou, reported China’s state television network, CCTV. At one point, nearly eight inches of rain fell in one hour in Zhengzhou, a city of five million along the Yellow River.

A video posted by The Paper, a state news organization, showed people stranded in a subway car with water up to their chests. In the tunnel outside the window, water continued to surge past. Other photographs showed several lifeless bodies on a subway platform. It was not immediately clear how many people were trapped in the city’s subway, which has seven lines and 148 stations.

The downpour flooded roads and railways and disrupted operations at the airport, CCTV reported. At least one hospital, First Affiliated Hospital of Zhengzhou University, was reported to be inundated with flood water.

Videos circulating online showed automobiles being swept away in churning muddy waters. In one, a woman shouts that a man and woman had been swept away in the current.

The toll of the flooding — in lives and economic damage — seems likely to rise.

Flooding is routine in China, but it appears to have become more severe, which researchers have attributed to climate change.

China faced weeks of severe flooding last summer along the Yangtze River that killed hundreds of people and displaced millions more. The rains at that time filled the Three Gorges Dam to its highest level since it opened in 2003.

In times of disaster, the country’s state media often focuses on the efforts of rescue workers, including the military, while playing down the causes of disasters and their damage.

A journalism professor, Zhan Jiang, posted a note on Weibo, the social media platform, complaining that the television stations in Henan Province continued to show its regular program — what he called an “anti-Japanese drama” — instead of providing public-safety information.