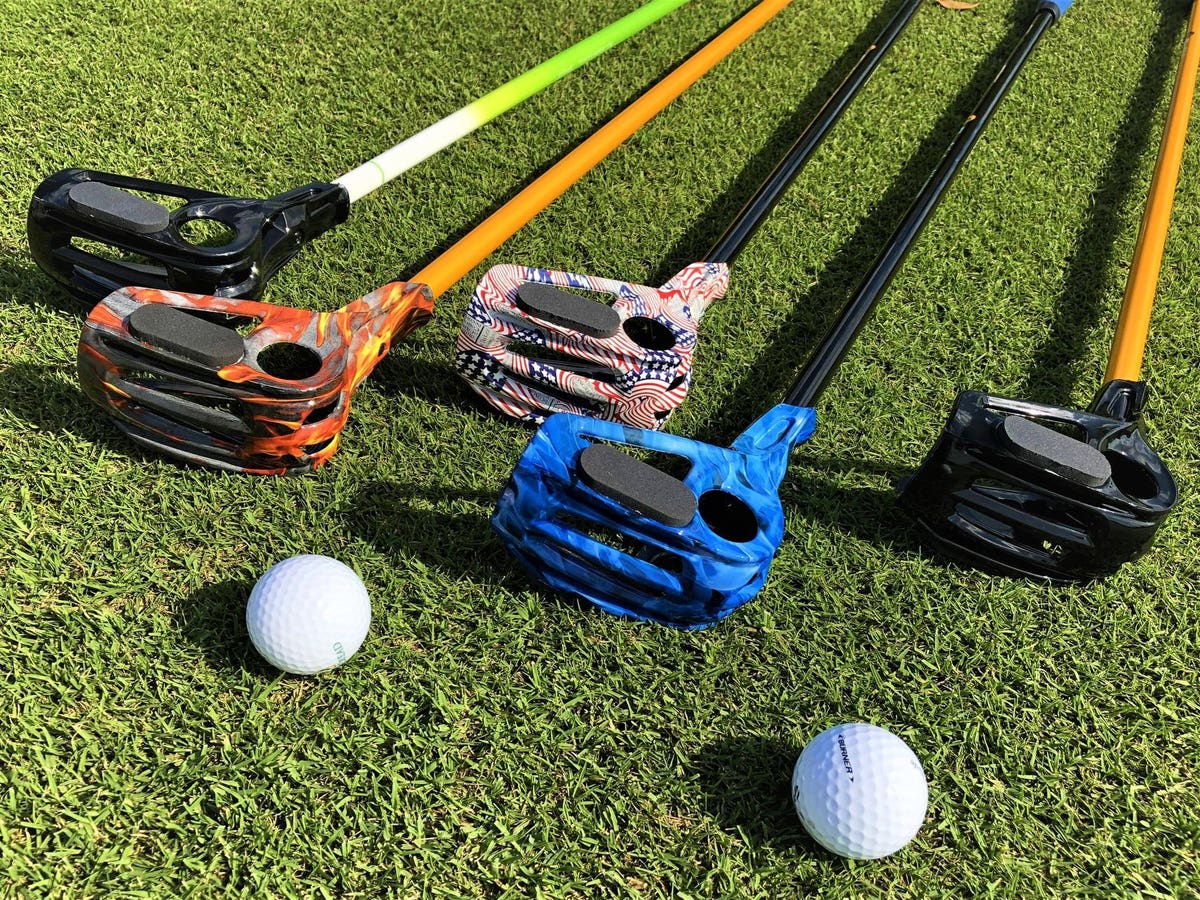 “This is the one thing that might get me to a golf course,” Shark Tank’s Mark Cuban quipped following FlingGolf’s presentation of their newfangled sport where golf balls are hurled using a stick with a basket on the end instead of being struck with a club.

The tell that the Dallas Mavericks owner wouldn’t be making an offer was when he ducked behind his chair when billionaire Daniel Lubetzky stepped up to give the game a whirl. FlingGolf closed a deal with the Kind snacks founder on the show after he whipped a ball into a practice net that valued the company at $1.2 million.

While the idea of a lacrosse meets golf hybrid may trigger visions of the sophomoric film BASEketball, there are no cockamamie quirks to FlingGolf. The gameplay is identical to regular golf, you simply carry one club called a FlingStick that can handle every situation from tee to green.

The company keeps a map on their website of the 1000-plus courses where the game has been played and encourages players to “liberate” the courses where it has not. Despite the provocative-sounding rhetoric, there has actually been very little resistance or pushback from course operators.

“Golf course owners are kind of like farmers who own 200 acres,” CEO and founder Alex Van Alen explains, likening his creation to a crop that can be planted between existing rows of corn leading to a more productive harvest.

“If you’ve got three guys going out and a FlingGolf player can make that a foursome, that’s just adding more revenue to your bottom line,” he adds.

Van Alen dreamed up the concept when he was a kid growing up on a farm west of Philadelphia. He and his two brothers had a penchant for stitching sports together to create unique amalgams. Memorable mashups included football on skates, ultimate frisbee while riding dirt bikes and sledding down hills on big wheels. Most of their crazy antics would be great fodder for a junior version of the MTV reality show Jackass, but the golf variant had staying power. He knew it could be a home run.

Van Alen’s goal was to be able to throw a golf ball 200 yards and it would take him 18 months of prototyping and working back and forth with a product developer to accomplish the feat. He knew he might be onto something early in the process when he began experimenting firing golf balls with a wicker cesta used for jai alai he’d picked up on eBay.

“That was a pretty big moment. I was only able to throw it about 80 or 90 yards but I was also able to spin the ball.  I could shape my shots and do a fade or a draw,” Van Alen says.

When it was time to take the product to market he brought on John Pruellage, who has a background in advertising, as a business partner.

The FlingStick was soft launched in the summer of 2014 and then debuted at the PGA Merchandise Show in 2015. In its earliest permutations, the putting was suboptimal requiring golfers to push the ball toward the pin using a scoop in the side of the channel head. The current clubs, which retail from $89-$179, feature a blade shaped pad which when combined with a ‘putting slug’ insert provides the same weight and feel of a traditional flat stick.

Since the episode aired, FlingGolf sales have been brisk and they’ve had to double up the size of their warehouse in Amesbury, Massachusetts so they can stock more inventory. The year before going into the tank, FlingGolf sold $140,000 worth of product and for 2021 their top line revenue is projected to exceed $1 million. While there are a few hundred courses in America where players can rent a FlingStick, the vast majority of sales are direct to the consumer.

Austin Ebersole, the director of golf at the American Classic Golf Club in Lewes, Delaware acquired a taste for FlingGolf three years ago.

“It’s a more athletic way to play golf because you are using your whole body to make a lacrosse like throw,” Ebersole explains.

Since the game is a far quicker study than traditional golf, for which players can often take lessons for months, he is not expecting the repeat business to be on par.

“I firmly believe with FlingGolf, after three lessons, they probably won’t ever need me again. One lesson is based on long distance throws, then chipping and pitching and the third lesson is putting. After that there really is nothing else to teach,” Ebersole says.

A partnership with the U.S. Air Force has brought FlingGolf to a couple dozen bases in the U.S. and abroad and servicemen and women are beginning to glom onto the game.

“Airmen, dependents and youth love it because it saves time, it’s inexpensive, it doesn’t tear up the grass and it’s also healthy exercise. It’s a great product for those who don’t want to invest time and a lot of money into lessons just to have fun,” Air Force golf program specialist Dave Roberts says. He adds that plans are currently underway to bring FlingGolf to more bases.

Next on FlingGolf’s agenda is to nurture their player community by developing and promoting tournaments at the local and national level to give avid players a chance to showcase their skills.  Also on the drawing board is an annual FlingGolf convention for enthusiasts.