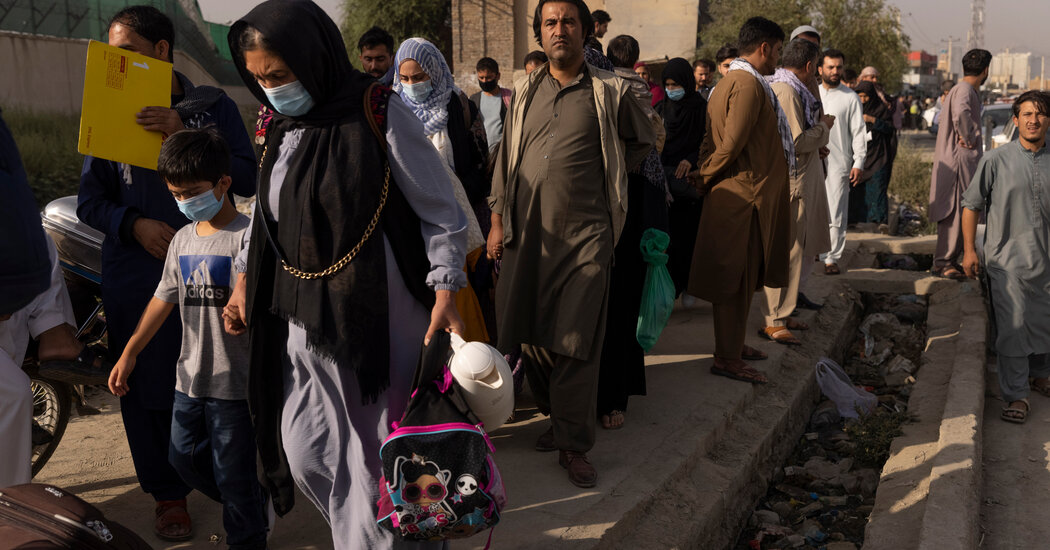 WASHINGTON — A sluggish State Department response to the Taliban’s rapid takeover of Kabul, Afghanistan’s capital, has stranded thousands of Afghans who helped the United States and are now clamoring to be evacuated as they wait for their immigration visas to be approved, two U.S. officials said.

As many as 6,000 people — including former interpreters and cultural and political advisers — were on standby to be flown out of Kabul’s airport late on Thursday night or early Friday alone, after a days-long pause in the processing of visas for Afghans who had worked for the American military or embassy during the 20-year war, the State Department said.

Thousands more are expected to be vetted and evacuated on a daily basis after a small influx of consular officers and other diplomats — including the former ambassador to Afghanistan, John R. Bass — arrived in Kabul on Thursday to speed the visa processing. Diplomats are also deploying to Qatar and Kuwait, where U.S. military bases will serve as way stations for people arriving from Afghanistan as they search for a final destination.

“This is an operation that will continue at as fast a clip as we can possibly manage,” Ned Price, a State Department spokesman, told reporters on Thursday. He said American officials were continuously alerting Afghans who had been cleared to fly, including more than 800 on Wednesday night.

“Our hope is that tomorrow we’ll be able to process even more,” Mr. Price said. “But ultimately, the metric we care about most is how many people we are able to repatriate here to the United States, or bring to third countries. That is our goal.”

The U.S. military is only evacuating Afghans who have completed what Mr. Price called “a certain stage of the security-vetting procedure.” He would not provide details of the process, but another official said security checks were continuing even as Afghans were being flown to safety.

But two other U.S. officials described growing impatience across the Biden administration with the State Department’s inability to process visas more quickly, as thousands of Afghans who had already risked their lives to ally with the United States waited fearfully outside the gate of the international airport in Kabul.

One of the officials described how challenging it was to ensure that those who helped the United States could reach the airport safely with other Afghans also trying to evacuate and the Taliban operating checkpoints across the capital.

Officials also echoed refugee advocates, who accused the State Department of having been caught flat-footed in processing the special immigrant visas for Afghans — even though President Biden announced in April that the American military would be leaving by the anniversary of the Sept. 11, 2001, attacks that led to the U.S. invasion of Afghanistan.

“There are tens of thousands of Americans and Afghans literally at the gate,” said Sunil Varghese, the policy director for the International Refugee Assistance Project. “This could have been completely avoided if evacuation was part of the military withdrawal. This was avoidable, and we’re at the 11th hour now.”

“But that being said, I think we can make sure this is an evacuation and not something more tragic,” Mr. Varghese said.

As of Thursday afternoon, the U.S. military had evacuated 7,000 Americans, Afghans and others since Saturday, officials said. That is still well short of the 5,000 to 9,000 passengers a day that the military will be able to fly out once the evacuation process is at full throttle, Defense Department officials said.

Armed fighter jets made passes over Kabul and Hamid Karzai International Airport as part of the effort on Thursday to secure the enormous evacuation in what the Pentagon’s press secretary, John F. Kirby, said was an “overwatch” mission.

There have been reports of non-American evacuation flights leaving with many empty seats, a sign of the difficulties thousands of people have faced trying to make their way to the airport. The Pentagon has warned the Taliban not to interfere with the evacuation.

Representative Tom Malinowski, Democrat of New Jersey, said even Afghans who had been vetted and told to come to the airport were unable to get past U.S. troops at the airport’s gate. He called it “inexcusable” that the State Department and Pentagon were not coordinating better to ensure “that whoever the U.S. government invites will be recognized and allowed in by people at the gates who know what they’re doing.”

Mr. Malinowski, an assistant secretary of state for democracy, human rights and labor under the Obama administration, said that disconnect dominated the current administration’s attention for much of Thursday.

The problem “is within our power to solve,” Mr. Malinowski said, adding, “It has not gotten better.”

The process of vetting Afghans who qualify for the special immigrant visa was dormant for nearly a year, after the State Department shut down much of its classified consular operations when the first wave of the coronavirus forced employees to work from home.

The visa system had a backlog of 17,000 cases when Mr. Biden took office in January, according to the State Department. The U.S. Embassy in Kabul resumed interviewing Afghans for the visas in February, and was processing at least 100 people each week before the pandemic halted the operation again in June.

In mid-July, the Pentagon began an expedited airlift of Afghans who had worked for the U.S. government. Under that effort, called Operation Allies Refuge, more than 2,000 Afghans were evacuated from Kabul before the Taliban closed in on the capital last week, forcing the Biden administration to temporarily abandon its visa processing and focus on ensuring that Americans could escape.

Mr. Price said the State Department also had been working to find countries that would take in the evacuated Afghans who had not had time to apply for settlement elsewhere in their rush to leave the country. The governments of Albania, Uganda, Canada, Mexico and Chile had offered to take in some people for varying periods of time, he said.

The U.S. government is not charging Afghan refugees for the evacuations. A number of private operations are also organizing flights out of Afghanistan, including to countries with less rigorous documentation requirements, although some are asking evacuees to pay for seats.

Seats on some private flights in the days after the U.S. withdrawal went for $100,000 each or more, according to a person familiar with the fares.

People involved in the private flights said they had been working with the State Department, the Pentagon and the White House to obtain proper clearances to fly into and out of the airport in Kabul, but that their efforts had been complicated by disorganization from the U.S. government, as well as difficulties transporting evacuees to the airport and securing insurance for planes.

One effort that has arranged flights from Kabul to a nearby country was organized by former Representative Scott Taylor and the Washington fixer Robert Stryk, whose lobbying firm was paid $160,000 to represent Afghanistan’s government for a few months in 2017.

For an initial flight, dozens of Afghan passengers paid as much as $12,500 per seat. But since then, the operation has been able to lower prices to roughly what commercial airlines were charging before the American military withdrawal, said Mr. Taylor, who served as a member of the Navy SEALs before representing Virginia as a Republican in Congress.

The operation has come to include members of his former campaign staff, as well as political donors who have offered to pay some upfront costs and a Virginia-based logistics company called Regulus Global that works for the U.S. government in global hot spots.

“We have a command center right now that’s 24/7,” said Mr. Taylor. “We are just trying to help as many people as possible.”

After Mr. Taylor posted a message on LinkedIn indicating that he was arranging flights, his team began fielding thousands of requests from American citizens, Afghans, corporations and academic institutions, he said.

“People are scared for their lives. When you read some of these messages, it’s real sad,” said Mr. Taylor, who suggested some of the chaos could have been mitigated with better planning by the U.S. government. “This was really botched, man. I am a military guy, and this is crazy to me.”

At least one flight of people evacuated from Afghanistan arrived at Dulles International Airport outside Washington on Thursday, with its passengers receiving additional processing and coronavirus testing upon landing.

Timothy Young, a spokesman for Lutheran Immigration and Refugee Service, said fewer people were expected to arrive “with visas in hand” on the flights from Kabul — a sign the State Department was loosening its vetting restrictions to speed the evacuations.