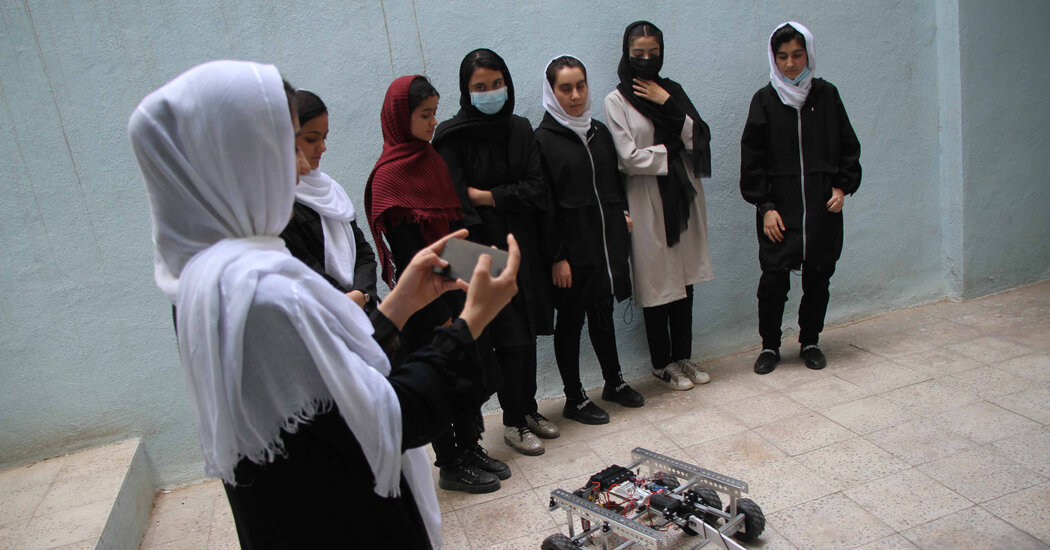 Some members of an Afghan girls’ robotics team that captured international attention have arrived in Qatar, the group says, joining a growing number of people fleeing the Taliban’s takeover of Afghanistan.

Members of the team left Kabul on a commercial flight on Tuesday and will remain in Qatar to continue their education, according to a statement on Wednesday by the team’s founder, the Afghan tech entrepreneur Roya Mahboob.

Other girls on the robotics team, Afghanistan’s first, planned to remain in the country, where Ms. Mahboob acknowledged that they face a worrying future under the Taliban. The hard-line Islamist movement barred girls from attending school when it last ruled Afghanistan, from 1996 to 2001, and although its leaders say they will allow greater freedoms, many Afghans are skeptical.

“The Taliban have promised to allow girls to be educated to whatever extent allowed by Shariah law,” Ms. Mahboob said. “We will have to wait and see to what that means.”

“Obviously, we hope that women and girls will be allowed to purse dreams and opportunities under the Taliban,” she said, “because that is what is best for Afghanistan and in fact the world.”

Members of the team left their hometown, Herat, in western Afghanistan, as the Taliban seized territory across the country last week. They were scheduled to fly out of Kabul on Monday, but amid chaos at the airport, including Afghans crowding the runway and even clambering onto the fuselage of departing planes, their flight and others were canceled.

The team won hearts worldwide in 2017, when six members were denied visas to travel to the United States for a robotics competition, only to be allowed in eventually after a public outcry, a congressional petition and intervention by President Donald J. Trump.

They traveled back and forth between Afghanistan and competitions in North America and Europe for several months until their visas expired, amassing trophies and social media followers.

In 2019, when the Taliban and the United States were working to negotiate a peace agreement, one of the team members, Kawsar Roshan, told The New York Times that a future in which the Taliban denied her an education “would be unbelievable for me.”