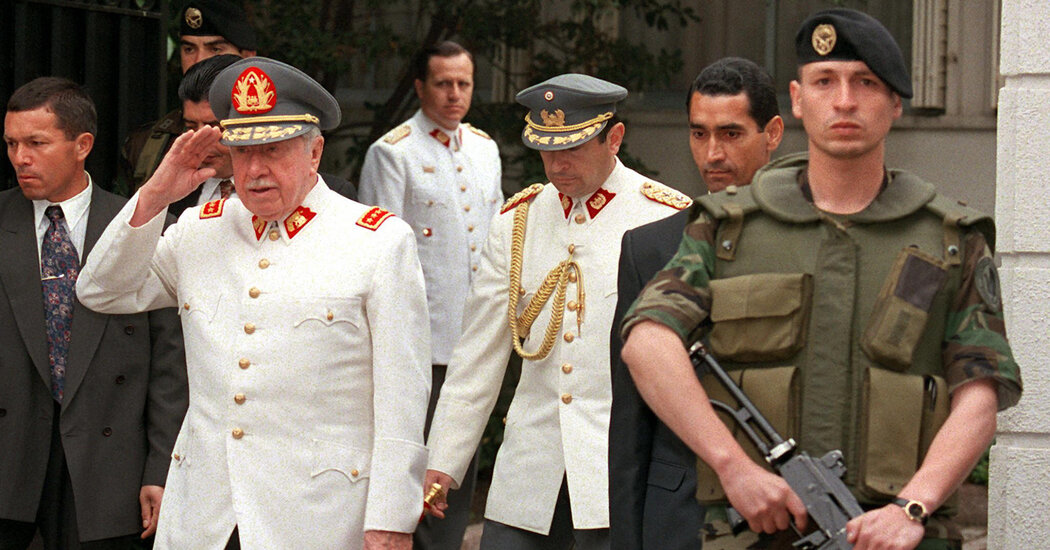 MADRID — Nearly 15 years after the death of the former Chilean dictator Gen. Augusto Pinochet, victims of his brutal regime are still trying to hold him and his associates accountable. And now the victims appear to be one step closer to justice — even if the courtroom is on the other side of the world.

This month, the Supreme Court of Chile was notified by the National Court of Spain that an investigation had been reopened in Madrid into whether a bank, Banco de Chile, helped General Pinochet and his associates launder millions of dollars overseas, according to court documents sent to the lawyers in the dispute.

The plaintiffs are led by the President Allende Foundation and represent more than 20,000 victims of the Pinochet dictatorship. The focus of the legal effort has been on funds believed to have been expropriated by General Pinochet and his associates and transferred to personal offshore accounts, in what the plaintiffs say were also acts of tax evasion and money laundering.

Spain was chosen for the legal case because it has pioneered efforts over the past three decades to hold autocrats worldwide accountable for their crimes in jurisdictions other than their own countries.

While General Pinochet died under house arrest in Chile in 2006 without ever standing trial, he was detained in Britain in 1998 on the order of a Spanish judge, Baltasar Garzón, who then failed to convince the British government to extradite him to Madrid. Britain instead allowed him to return home because of his ill health. In 2011, a Chilean commission investigating torture, kidnappings, murders and other human rights violations during the general’s dictatorship identified over 40,000 victims.

Banco de Chile had for years successfully argued that Chile rather than Spain had the jurisdiction to investigate its Pinochet-related operations. But in Chile, the judiciary closed a money-laundering investigation in 2013 without charging the general or anybody else. According to a study commissioned by the Chilean Supreme Court, only $2 million of the $21 million identified as General Pinochet’s personal fortune could be accounted for as clean money.

Eventually, in 2018, Chile’s Supreme Court ordered the restitution of $1.6 million of General Pinochet’s assets, while sentencing three of his former generals for fraud related to public money. Banco de Chile was never charged in Chile over money laundering, but it paid $3.1 million to the Chilean authorities in 2009 over administrative irregularities relating to General Pinochet’s money.

The plaintiffs are hoping to achieve in Spain a result at least comparable to one reached in the United States, where Riggs Bank agreed in 2005 to pay an almost $9 million penalty. That allowed the bank to avoid prosecution for failing to report transactions that included money transferred to General Pinochet’s bank accounts. It followed a U.S. Senate investigation that also established that Banco de Chile was among the banks that helped General Pinochet gain access to the U.S. banking market.

In its report explaining why it was reopening the case, the Spanish court said that Banco de Chile should set aside the $103 million to cover the possible payment that victims of the Pinochet regime are seeking. But the Spanish judge leading the case has not yet ordered the bank to post this bond. The amount is based on the findings of Spain’s public prosecution in 2009 after it investigated possible money laundering by General Pinochet.

Banco de Chile is being represented in Spain by Cuatrecasas, one of Spain’s biggest law firms. Neither responded to queries seeking comment.

Juan Garcés, a Spanish lawyer working for the plaintiffs, said that if the bank refused to cooperate with the investigation, including with an anticipated bond order, the next step would be to get Spain’s judiciary to use bilateral agreements to force prosecutors in other countries to freeze assets owned by the bank. European Union legislation came into force last December that was designed to enhance judicial cooperation against tax evasion and money laundering.

According to its latest filing with the U.S. Securities and Exchange Commission, Banco de Chile last year had deposits in a dozen countries, including six in the European Union: France, Denmark, Finland, Germany, Sweden and the Netherlands.

Banco de Chile is majority-owned by Quiñenco, the holding company of the Luksic family, which ranks among the wealthiest in Chile. The bank’s president, Pablo Granifo Lavín, is a defendant in the case. Banco de Chile closed its subsidiary in New York after getting entangled in the Riggs inquiry.

Spain’s national court is reopening the case, which had been suspended for eight years, after concluding that Chile’s judiciary had not investigated fully the wealth expropriation accusations that had been made against General Pinochet. “The facts must continue to be investigated,” a panel of three judges from Spain’s national court wrote in a decision that rejected Banco de Chile’s appeal against reopening the case in Spain. The Chilean Supreme Court was notified of the decision on July 8.

The foundation pursuing the lawsuit is named after Salvador Allende, the left-wing president who died during a 1973 military coup that toppled him from office.

The court decision is in itself a victory for the plaintiffs against Banco de Chile, because the bank had been “seeking for years to deceive Spanish judges by convincing them that its activities could be properly investigated in Chile instead,” Mr. Garcés said. “We have very solid evidence that makes us confident that we can finally condemn those who helped the dictator launder his money.”

Mr. Garcés once worked as an adviser to Mr. Allende. For decades, he has doggedly pursued General Pinochet and his money trail in different courtrooms.

In 2005, the Allende foundation filed its first lawsuit in Spain against Riggs Bank, accusing it of helping General Pinochet — as well as his wife, Lucía Hiriart, and Oscar Aitken Lavanchy, the appointed executor of his estate — to transfer stolen assets to offshore bank accounts. The lawsuit was extended to include Banco de Chile as the bank working for General Pinochet, but Banco de Chile then launched its own money-laundering investigation in Chile, convincing the judges that the issue was for Chile rather than Spain to put on trial.