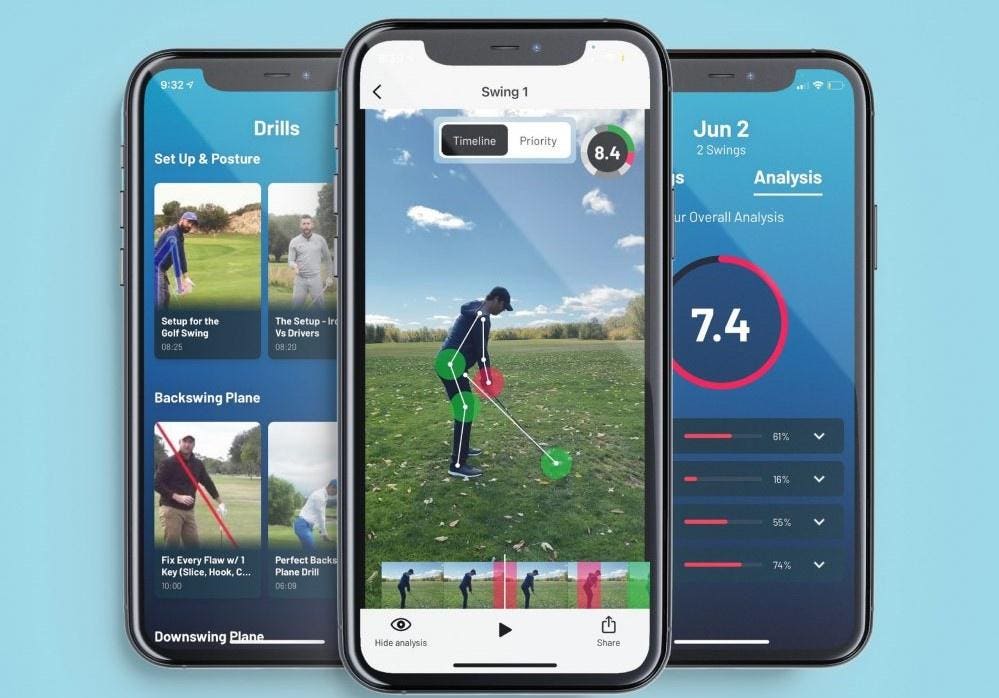 Some golfers may soon have a junior girls soccer coach to thank for the dramatic improvement to their swing.

Joe Chin, a serial entrepreneur and former Columbia University football player, is one of the visionary minds behind the new game-improvement golf app Sparrow. The soon-to-be-released app uses self-developed A.I. technology and a user’s phone to analyze the golf swing and provide feedback and instructional drills in real time.

Chin for years has used technology – laptops and sideline video – to help coach his daughter’s soccer teams. And being a partner in an agency that’s built apps for more than 100 start-ups, it was a natural extension to pair A.I. and video in an app designed to help other athletes improve. While the team started with soccer, it became quickly apparent that golf was a natural fit.

“My business partner, Sam (Pigott) was a state champion golfer in Vermont and whenever we showed golfers what we were doing for soccer, they’d say you have to do this for golf.” Chin said. “We made the natural pivot and haven’t looked back.”

More than two years and $1 million has been invested in the Sparrow app and its A.I. technology in an effort to help golfers of all ages and abilities have greater access to innovative ways to learn and practice. Professional golfers Harold Varner III, Martin Laird and Brittany Lincicome are investors and ambassadors for the company.

“We’re really looking to solve a pain point,” said Chin. “For most golfers, you can go to get a lesson, but often afterwards everything you learned goes by the wayside. And often in those situations the golfer doesn’t know what’s going wrong. We can step in and it’s almost like golf improvement in your pocket.

“It’s just an incredibly powerful thing and the timing for this really has just come about,” Chin added. “The phones, they’ve been getting more and more powerful, the cameras have gotten better, and the A.I. technology as well. It’s those three things converging that’s made Sparrow very timely.”

As a lead-up to launch, Sparrow has opened a round of equity crowdfunding that’s looking to raise up to $3 million through Wefunder.com and allow anyone interested to become early investors in the company for as little as $100. The app’s angel investors, which range from Fortune 500 CEOs to a World Cup-winning soccer coach, came in during an initial $1.8 million fundraising round.

“It’s a good way to raise funding, but we also want to give everybody the opportunity to share in the upside of Sparrow and what we’re doing,” Chin said of the crowdfunding effort. “We feel this (A.I. learning) is the future of golf and athletics in general. So, we thought it would be great to let everyone become an owner and in return what the company gets is thousands of ambassadors who are part of the company. The response has been phenomenal.”

When Sparrow officially launches, it will offer both free and premium versions that are straightforward and intuitive, with clear visuals and impactful feedback. With the trial version, a user can get basic swing analysis, video drills, comparisons to a pro at problem points in their swing, and a certain level of video storage. The premium versions, at $10 or $20 per month, will offer deeper swing analysis, swing speed, A.I. drills and coaching, and eventually ball trajectory and control.

Pigott, in addition to being a former state champion golfer, has helped design and develop apps that have over 100 million users, including one for a company now worth $3 billion, just six years after the solo founder asked Chin and his agency for help. The third founder of Sparrow, Todd Eaglin, has a PhD in A.I./Computer Vision and has developed A.I. apps for companies such as Lowe’s
and Universal Studios, not to mention technology used by doctors during surgery. And their A.I. tech for golf is continuing to evolve and improve rapidly. That should be sweet music to the ears of the vast majority of the nearly 25 million U.S. on-course golfers who are in a constant quest for improvement.

“We’re open to letting people know that we’re in the first inning of what is a brand-new industry, which is A.I.-guided athletic improvement,” said Chin. “This first version, for the lack of a better word, is looking at the heart of the bell curve of all these professional swings that were plugged in. It’s comparing everyone to that average model. As we go forward, we expect the A.I. to become smarter and smarter, and more personalized – depending on your level of play or your height, weight, flexibility. It’s going to recommend different things to you.”

“It’s a craft to build something that’s powerful, but easy to use. I attribute that to Sam,” adds Chin. “We’ve found that just showing what golfers are doing wrong and giving them some direction and how to improve is tremendously helpful.”

And soon, after the current crowdfunding round, Sparrow will be ready to fly.