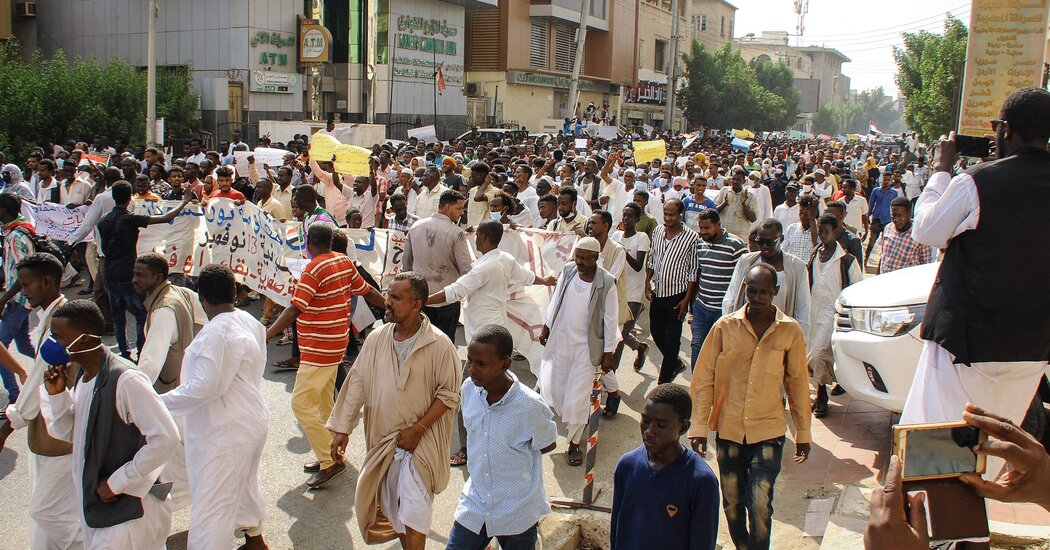 NAIROBI, Kenya — Sudanese security forces fired tear gas and live gunfire into crowds of demonstrators on Saturday, killing one person and wounding several others, as one of Africa’s largest countries plunged deeper into a crisis set off by a recent military coup.

Tens of thousands of people massed on the streets of the capital, Khartoum, and several other cities to protest the country’s military chief, Lt. Gen. Abdel Fattah al-Burhan, who has progressively tightened his grip on Sudan since he ousted the civilian prime minister on Oct. 25.

The demonstration was the latest in a series of actions, including strikes and civil disobedience, led by angry Sudanese hoping they can force General al-Burhan to reverse the coup. Their position is backed by the United States, which has called for the immediate restoration of Prime Minister Abdalla Hamdok, and by other Western nations that have suspended aid to the cash-strapped country in an effort to pressure the military.

But Sudan’s generals seem to be going in the opposite direction. On Thursday General al-Burhan appointed himself head of a new ruling body that excluded the civilians he had shared power with since the ouster of the longtime dictator, Omar Hassan al-Bashir, in 2019.

On Saturday, the military appeared intent on drawing a line in the streets.

Soldiers closed a major bridge across the Nile linking Khartoum to its twin city, Omdurman, a traditional hotbed of protest. Coils of barbed wire were strewn across major junctions to stop protesters from reaching rallying points near the presidential palace.

On Oct 25, a coup led by the military derailed Sudan’s transition to civilian rule and plunged the country back into fear and uncertainty.

Even so, thousands of people spilled out of neighborhoods in both cities, clashing with riot police officers who fired tear gas at first and then used gunfire.

By late afternoon, the Central Committee of Sudanese Doctors reported that one person had been killed by live gunfire in Omdurman and many others had been wounded. The chaos engulfing the city was preventing some of the wounded from reaching hospitals, it said.

Although the internet has been largely shut down since the coup, activists circulated videos on social media that showed police officers firing their weapons at protesters amid plumes of tear gas.

Officers also chased protesters down side streets in an effort to prevent them from reaching rallying points in the city center, witnesses said.

“They don’t want people to unite,” Mariam al-Mahdi, the ousted foreign minister and a leading figure in Sudan’s largest political party, said in a phone interview.

One of the few civilian leaders not arrested since the coup, Ms. al-Mahdi is the daughter of Sadiq al-Mahdi, Sudan’s last democratically elected prime minister who was ousted by Mr. al-Bashir in a 1989 coup.

The governing body that the military announced on Thursday is dominated by military leaders and handpicked civilian allies. While General al-Burhan insisted he wanted to “protect the revolution” that ousted Mr. al-Bashir in 2019 and steer Sudan toward free elections in 2023, few Western nations accepted those promises.

On Friday the United States called on the military “to refrain from further unilateral action that will set back Sudan’s hard-won progress to rejoin the international community,” President Biden’s national security adviser, Jake Sullivan, said on Twitter.