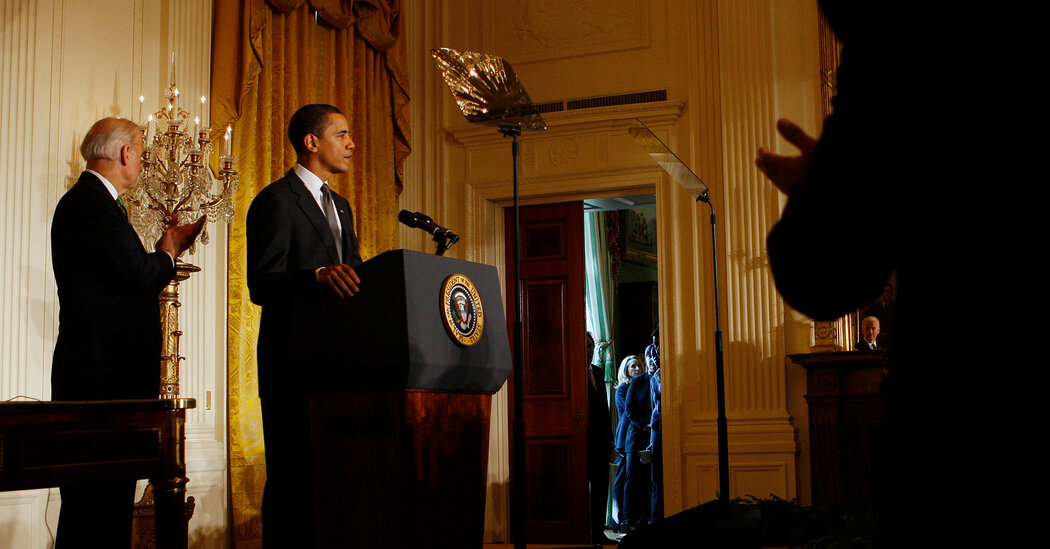 President Barack Obama’s 2009 stimulus bill was an economic success and a political failure.

Passed during the depths of a financial crisis, the law’s combination of tax cuts and government spending helped prevent another Great Depression. Stocks began rising within a few weeks of the law’s passage, and the economy began growing within a few months. Yet Obama and congressional Democrats never got much credit from voters. His approval ratings fell for much of his first term, and Republicans swept the 2010 midterms.

Part of the problem was that the bill was smaller than Obama had wanted — at the insistence of congressional moderates — and the post-crisis economic recovery was slow. But the bill had another political weakness, too. It was a hodgepodge of hundreds of policies, few of which affected Americans’ lives in big, tangible ways.

Can you think of a single enduring legacy of the law — a new bridge or airport that it built, or a new government program that it created? Probably not.

The law was both a triumph of technocratic policymaking and a failure of real-world politics. It was an example of what the political scientist Suzanne Mettler has called “the submerged state.” The subtitle of Mettler’s 2011 book of that same name is: “How invisible government policies undermine American democracy.”

At Obama’s side during the debate over the 2009 stimulus package, of course, was Joe Biden, then the vice president. Biden, who had just left the Senate after 36 years, helped negotiate the package. As Biden now tries to win passage of the most ambitious legislation of his own presidency, it’s clear that he has come to believe the submerged state is a problem for the Democratic Party and the country.

It is less clear whether he will avoid Obama’s missed opportunity or repeat it.

Congressional Democrats and the White House are now negotiating over what to include in a sweeping piece of legislation that they hope to pass this fall. In its original framework — favored by Biden and Democratic leaders on Capitol Hill — the bill included universal pre-K, free community college, expanded child care, paid family leave, child tax credits, expansions of both Medicare and Medicaid and funding for clean energy.

But moderate Democrats favor a smaller package, with less government spending — as happened in 2009, as well. Some Democrats are also uncomfortable with either raising the money needed to pay for the bill (through tax increases on the rich and corporations) or adding to the deficit. As a result, Democrats are now shrinking the plan from its initial cost of $3.5 trillion, spread over 10 years, and being forced to make hard choices about what should remain.

Those choices, in turn, have led to disagreements that break down not along predictable ideological lines but instead what I think of as technocratic/realpolitik lines.

The technocratic camp includes those Democrats — including many on the left — who favor a cost-benefit approach. They want to do the most amount of good, helping the greatest number of people, with the available dollars.

One example: an expansion of Obamacare to include lower-income people in the 12 states (largely Republican-run) that have declined to expand Medicaid on their own. Many of these people lack health insurance and go without some forms of basic medical care. Another such policy Democrats are considering: an expansion of federal subsidies that help middle-class families buy private health insurance through Obamacare.

The realpolitik camp has a different emphasis. While still favoring expansions of Obamacare, these Democrats fear that the party will be repeating its mistakes of the Obama years if it focuses on improvements to complex bureaucratic programs.

For inspiration, this side can point to Franklin D. Roosevelt, who was often ruthless about considering the political salience of his policies. Once, when rebuffing the advice of one economic adviser about the structure of some new taxes, Roosevelt said: “I guess you’re right on the economics. They are politics all the way through.”

The realpolitik camp includes Senator Bernie Sanders, who prefers to expand Medicare, partly because he sees it as a popular, easy-to-understand program that will both help the poor and serve as the basis for truly universal health care. That description doesn’t apply to Medicaid. “We’ve got to explain to the American people what we’re doing here for them,” Sanders said on a recent trip through the Midwest to promote the Biden program, “and it can’t simply be an inside-the-Beltway process.”

Biden shares this view. As The Washington Post reports, “Biden is pushing programs whose benefits voters can easily grasp, according to aides and friends, such as universal prekindergarten and free community college.” He favors drug-price reductions for related reasons. Mike Donilon, a top Biden aide, has said, “The president is focused on having government deliver in a way that people can see and feel in their lives.”

Both approaches have their advantages and disadvantages, and both will no doubt shape the final bill. But in a sprawling plan that already lacks focus — the most common ways to describe it are process-oriented terms like “the $3.5 trillion bill” or “the reconciliation bill” — the bigger risk for the Democrats seems to be that they will pay too little attention to political realities. If they pass a bill that voters do not understand, Democrats are unlikely to control the levers of federal policymaking for long.

New York Fashion Week came to a close this past weekend. At the Rodarte show on Saturday, tinkling music played as models floated across a sculpture-adorned courtyard in shimmering dresses. It felt like a tribute to the natural world: There were mushroom-printed silk dresses that billowed like parachutes, as well as embroidered flowers, shells and a cape bearing a sequined alien. For the finale, models strolled out barefoot in simple, neutral looks, the last one holding a succulent.

In a review of the week’s final shows, Vanessa Friedman, The Times’s chief fashion critic, wrote about the “growing fault line” between the city’s older, well-established brands and newer labels with more raw and socially conscious sensibilities.

Many of the week’s highlights were presentations by younger brands, like Peter Do’s debut show, full of finely tailored suits and elegant coats. On a rooftop garden, Collina Strada piled layers of colorful, upcycled materials onto models who ran, skipped and held hands. LaQuan Smith hosted a glitzy show at the Empire State Building where poodles pranced alongside the models.

“The clothes that seemed most relevant spoke not in a generic form of sunny-side-up glamour but in a primal assertion of difference,” Vanessa wrote. Read the rest of her review. — Sanam Yar, a Morning writer

This quick lunch builds on a sturdy base of crispy, cheesy tortillas.

In “The Red Studio,” Henri Matisse included tiny versions of his past paintings and sculptures. For the first time, MoMA will show the painting alongside the works it depicts.

The pangram from yesterday’s Spelling Bee was fixable. Here is today’s puzzle — or you can play online.

P.S. President William McKinley died at 2:15 a.m. 120 years ago today, more than a week after an assassin shot him. His vice president, Theodore Roosevelt, was sworn in later that day.