The Day After the Fall 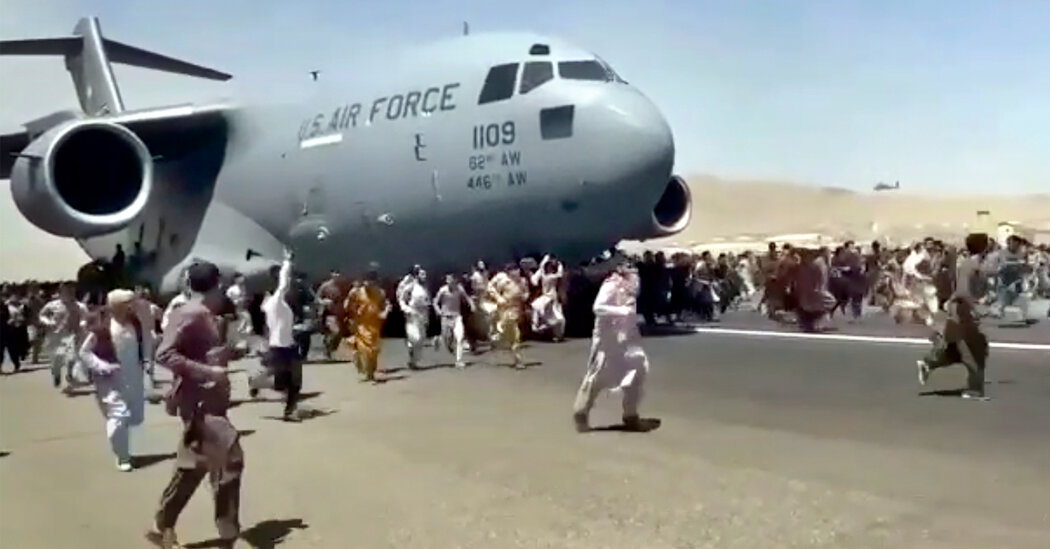 When the Taliban entered Afghanistan’s presidential palace on Sunday, the insurgent group completed a two-decade fight to take back control of the country. The president had fled; the interior minister announced there would be a peaceful transfer of power for greater Kabul.

Monday offered the first glimpse of a country coming under Taliban control. We’ll look at how the day unfolded in three places: the airport in Kabul, where people made a desperate attempt to escape; the city itself, where most people spent the day hiding; and Washington, where President Biden stood by his plan to withdraw U.S. troops.

For much of Monday, Kabul’s main international airport was a scene of anguish and panic. Thousands of Afghans rushed boarding gates and flooded the tarmac hoping to find a flight out of the country. At one point, a crowd ran alongside a departing U.S. military plane, with some Afghans clinging to the side of the aircraft.

At least half a dozen Afghans died — some fell from the plane as it flew off, and at least two were shot by U.S. soldiers trying to contain the surging crowds.

Thousands of people camped in terminals overnight waiting for flights out of the country, many of them employees of international organizations and media companies the Taliban has targeted.

With runways cleared of civilians, military flights resumed evacuating foreign nationals early this morning as more U.S. troops arrived to oversee a frantic escape. By later this week, 6,000 American troops will conduct security at the airport, though Biden said they would only be in Afghanistan briefly.

Even with U.S. military restoring order within Kabul’s international airport, it was unclear whether Afghans could make it there. Despite assurances from the Taliban of safe passage, there were more ominous signs on the ground.

The Taliban spread out across the streets of the capital city, riding motorbikes and driving police vehicles and Humvees taken from the Afghan security forces.

Armed men visited the homes of Afghan government officials, confiscating possessions, while others directed traffic. But compared to the chaos at the airport, the city was eerily quiet, residents said.

Kabul’s streets were empty for much of Monday, Al Jazeera reported. Taliban fighters took selfies with passers-by and told residents not to fear them. “There will be no revenge” on civilians, a Taliban official told the BBC.

The Taliban have sought to assure Afghans that life under their fundamentalist rule will be less oppressive than in the 1990s. But many are still scared. In Kabul, some residents tore down advertisements that showed women without head scarves. In other parts of the country, there were reports that fighters were searching for people who had collaborated with Americans or the fallen government.

A young woman in Kabul told the BBC that the city was “silent,” with many people hiding in their homes. “I’m just seeking for a way to get out of Afghanistan because there is no hope for women and the future,” she said.

In a speech at the White House, Biden said the withdrawal had been “hard and messy and, yes, far from perfect” and acknowledged that the Taliban had taken over faster than his administration had anticipated. “The buck stops with me,” he said.

But Biden also blamed the rapid collapse on the Afghan government and armed forces, and said he stood “squarely behind” withdrawing. “The events we’re seeing now are sadly proof that no amount of military force would ever deliver a stable, united, secure Afghanistan.”

Biden said U.S. soldiers would help evacuate thousands of American citizens, vulnerable Afghans who qualify for special immigrant visas and news agency workers. “Our current military mission is short on time, limited in scope and focused in its objectives: Get our people and our allies as safely and quickly as possible.”

And he vowed a “swift and forceful” response if the Taliban attacked U.S. forces or tried to interfere with evacuations.

Buzz: What if you could become invisible to mosquitoes?

Reflections: Why dancers keep showing up in front of an empty building in Paris.

A Times classic: How to meditate.

Lives Lived: Michael M. Thomas had three careers, as a curator at the Metropolitan Museum of Art, an investment banker at Lehman Brothers and, finally, a writer. He died at 85.

Last week, videos about sorority recruitment at the University of Alabama were all over TikTok. Many featured women in the middle of the process, also called “rushing,” as they documented their outfits. TikTok’s algorithm turned the videos into a phenomenon, inspiring parodies and a fandom. So far, the hashtag #bamarush has more than 260 million views.

As Kalhan Rosenblatt wrote for NBC News, rush videos have done well before on social media platforms like YouTube. But TikTok’s “For You” page, in which the app determines which videos users see next, introduced the genre to an audience that hadn’t engaged with college Greek life before.

What’s so transfixing about the videos is that they immerse people in an experience that’s likely to be unfamiliar. “You can follow an account and basically watch your own reality show,” one TikTok user told NBC News. “Southern sororities are so niche and so particular to a specific area in America, everyone finds it fascinating.”

For more, Slate’s ICYMI podcast has an episode dedicated to the topic. — Sanam Yar, a Morning writer

The pangram(s) from yesterday’s Spelling Bee was logophile. Here is today’s puzzle — or you can play online.