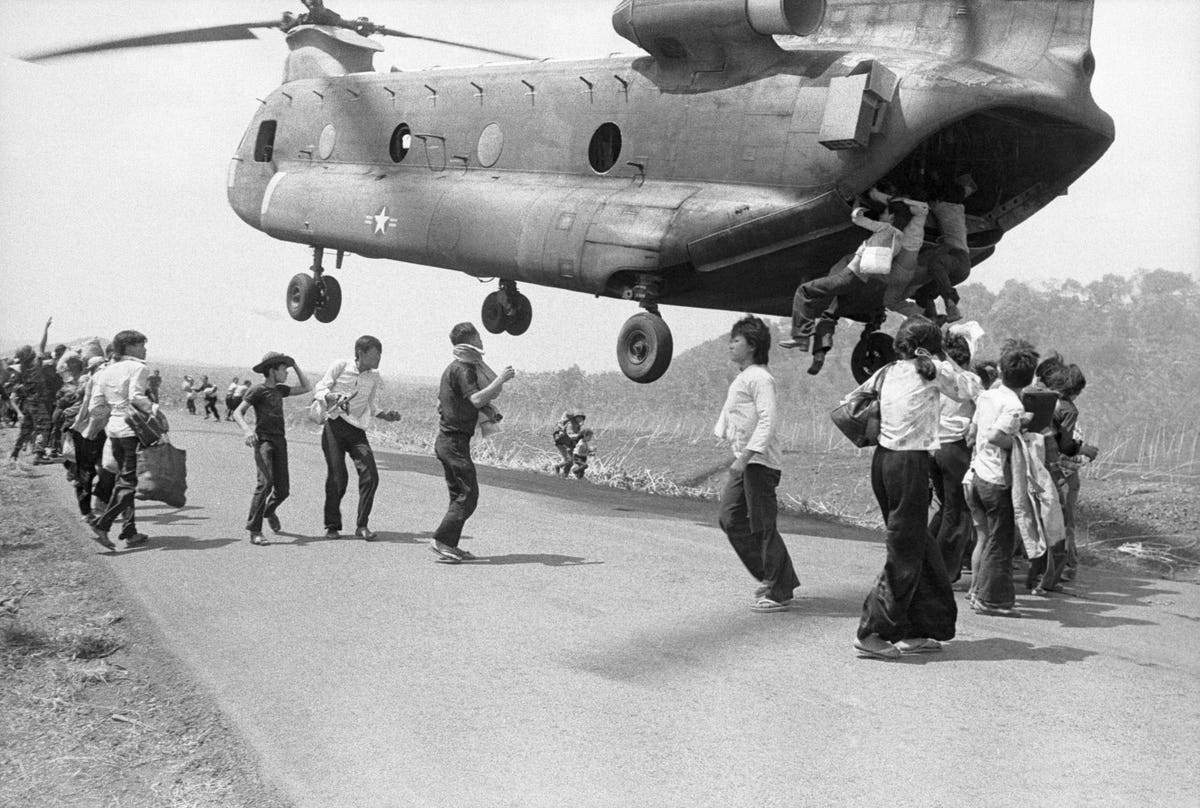 The images are still haunting. Desperate people clinging to overloaded aircraft. Stowaways falling to their deaths from aircraft wheel wells. Frantic mobs seeking escape from a doomed city, fearing the vengeance of a conquering army.

This wasn’t just the scene this month in Afghanistan’s capital Kabul as the Taliban took complete control of the nation. It was also the scene in Saigon in April 1975, as North Vietnamese armies closed in on South Vietnam’s capital. After 20 years of blood and treasure spent on staving off Communist control of Southeast Asia, the Vietnam War ended with pictures of the last evacuation helicopter leaving the roof of the U.S. embassy. By 1975, as the  United States reeled from the effects of Watergate, oil prices and economic recession, scenes of evacuation helicopters being tossed overboard into the ocean from overcrowded aircraft carriers seemed to symbolize the American superpower had sunk into termina decline.

Why would anyone be surprised that the Fall of Afghanistan is being likened to the Fall of South Vietnam? After 46 years, even the tropes are the same: Domino effect. Loss of American prestige. Fearful U.S. allies, and emboldened American enemies circling like wolves around a wounded prey.

But the prophets of doom were wrong. Just 15 years after Saigon fell, it was the Soviet Union that faded into a footnote of history. Nearly 50 years later, Vietnam is a semi-capitalist nation and a tacit American ally against China. When Vietnam’s biggest export market is America, and U.S. aircraft carriers make friendly visits to Vietnamese ports, then perhaps losing the Vietnam War wasn’t quite so catastrophic in the long run.

However, those Cold War fears are not even relevant to Afghanistan. The Fall of Afghanistan is not the Fall of South Vietnam.

First and foremost, Vietnam was a proxy battlefield in the Cold War. That superpower chess game between the U.S. and Soviet Union was zero-sum: if the Communists were perceived to have won somewhere in the world, then the U.S. was perceived to have lost in the global balance of power, and vice versa.

But there is no balance of power struggle between the U.S., and the Taliban, Al Qaeda, Islamic State, and other Islamic militant groups. The two sides are simply too unequal. Groups like the Taliban can win at the grassroots level in their home nations, but that’s different than occupying Eastern Europe as the Soviets did. The U.S. may have a spotty record of defeating insurgencies, but it can still deploy enormous military – not to mention economic and political power – around the world in a way that Osama Bin Laden could only have dreamed of. The Free World – and even most of the not-so-free world – aren’t about to be overrun by Taliban armies.

As for the Domino effect, there aren’t a lot of dominos to topple. Pakistan, which already has its own homegrown Taliban, might be a possibility. But Shia-majority Iran and Hindu-majority India are going to succumb to Sunni Muslim fundamentalism? Not likely. And Central Asian republics like Tajikistan, Uzbekistan and Turkmenistan, or China’s Xinjiang province? Those are in Russia and China’s backyard, and unlike the U.S., those two major powers have the incentive and the ruthlessness to do whatever it takes to keep those areas from becoming radical Islamic strongholds.

But won’t defeat in Afghanistan will cause America’s allies to lose faith in Washington’s willingness to defend them? The obvious answer is that any nation that expects American troops to keep dying on its behalf for 20 years deserves to have doubts – and might consider doing a better job of defending itself.

But the fact is that most Americans couldn’t have located Afghanistan on a map, if the Soviets and then Osama Bin Laden hadn’t been there. That’s different than the U.S. commitment to NATO, or Taiwan, or Israel, which reflect deep historical, political, cultural, and economic ties. Will Saudi Arabia or the Philippines see U.S. defeat in Afghanistan as a reason to defect to the Russian or Chinese camps? The question is what Moscow and Beijing can offer them that Washington can’t – and how far they trust Russia and China to be stalwart allies.

Will the Fall of Afghanistan traumatize the American psyche? Probably not. The Vietnam War was fought by a conscript army in an unpopular conflict that created deep divisions in American society, especially against the draft. The Afghan War was fought by a professional military insulated from the rest of society. America as a nation may have had a stake in Afghanistan, but most Americans didn’t.

The truth is the U.S. withdrawal from Afghanistan is just the culmination of a retrenchment of American foreign policy that began in the Obama years. Since 2008, three successive administrations have tried to disentangle the U.S. from President George W. Bush’s disastrous wars.

Will the Fall of Afghanistan affect President Biden? Domestic politics – fear of being seen as “soft” on Communism – helped drive the U.S. into the Vietnam War. Yet by 1975, America had moved on to other problems: President Gerald Ford didn’t lose to Jimmy Carter in 1976 because Saigon fell. Similarly, post-9/11 fears of terrorism helped George W. Bush win two terms in the White House. And yet again, the American public in 2021 is focused on other issues. Politically, Biden has more to fear from Covid-19 than Kabul.

To be sure, there are some similarities between the Fall of Afghanistan and the Fall of South Vietnam. A limited, temporary U.S. military intervention that dragged on for years. An attempt to remake a foreign army and a foreign society in America’s image, only to discover that there some things that America does not export well. And what should have been an orderly withdrawal of U.S. troops, as the U.S.-backed government filled the vacuum, turned into a rout and then collapse.