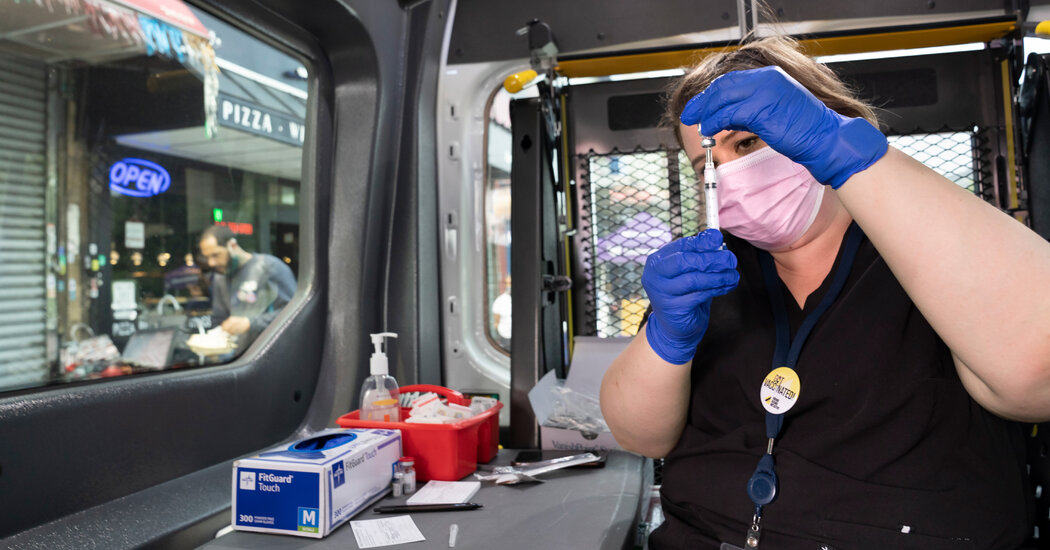 We’ve heard the question from friends, family members and dozens of readers: Should people who received the single-shot Johnson & Johnson Covid vaccine be getting a booster shot?

Karen, a Morning reader in Michigan, wrote to us: “Since receiving mine in March, I am wondering what the facts are. I am frightened.” Leah in California wrote: “Information about J.&J. is not communicated at all!” Lauren from Nashville asked: “What’s the guidance for us?”

Today’s newsletter is for them. We will try to lay out the facts so you can make your own decision.

The question of booster shots for the other two vaccines being used in the U.S. — the double-shot vaccines from Moderna and Pfizer, which are both based on genetic technology known as mRNA — has received more attention. Many experts believe that at least immunocompromised people and older adults are likely to benefit from a third shot.

The situation is murkier with J.&J.’s single-shot vaccine, which uses a more traditional virus-based technology. J.&J. has not received as much attention because only 8 percent of vaccinated Americans have gotten the shot. But that still covers 14 million people, and many of them want guidance.

From the start, J.&J. has appeared to be less effective than the other two U.S. vaccines. The latest C.D.C. data suggests the gap may be growing over time, partly because of the Delta variant. “All the evidence we have has shown J.&J. to be less effective in blocking both infections and hospitalizations,” Dr. Michael Lin of Stanford University told us.

About one out of every 20,000 J.&J. recipients in Colorado was hospitalized with Covid at some point during a recent week, according to the state, which publishes statistics by vaccine type. For Pfizer, the share was one in 27,000, and for Moderna it was one in 32,000.

It’s true that any of those chances remains extremely low. Dr. Linda-Gail Bekker of the University of Cape Town, who co-led a recent study of J.&J. and the Delta variant, told The Times, “We believe this vaccine is doing what it was designed to do, which was to stop people going to hospital and stop them ending in I.C.U.s and dying.”

Still, providing people with even more protection against a severe case of Covid has tremendous value. And given the contagiousness of Delta, the chances that a J.&J. recipient would become infected with a less severe case — and infect others — seem real enough to deserve attention.

What about a second J.&J. shot?

With many vaccines, not just for Covid, multiple shots are the norm.

That the Food and Drug Administration approved J.&J. as a one-shot vaccine was never a statement about whether a second shot would provide further protection. It happened because data showed that the J.&J. vaccine was quite effective after one shot, and scientists and regulators felt urgency about getting Covid vaccines into people’s arms.

What about a different booster shot?

But many J.&J. recipients are less interested in receiving a second J.&J. shot than a follow-up shot with either the Moderna or Pfizer vaccine. They know that J.&J. seems less effective than other vaccines, and some J.&J. recipients have been frightened by reports of a very rare but serious blood clot.

Notably, numerous doctors and some prominent experts who themselves received the J.&J. vaccine have chosen to receive a follow-up Moderna or Pfizer vaccine. The list includes Bill Enright, a biotechnology C.E.O.; Zoë McLaren, a health economist; and Angela Rasmussen, a prominent virologist. The city of San Francisco also began offering a Moderna or Pfizer booster shot to J.&J. recipients about a month ago.

There is little data on these vaccine combinations, which is probably the biggest reason to be cautious. But there is data on another relevant combination.

The AstraZeneca vaccine — which is being given in many countries but not the U.S. — is similar in design to the J.&J. vaccine. Many people in Europe and Canada received AstraZeneca for their first shot and Pfizer for their second, and they appear to be faring well.

This approach is sometimes described as “mix and match,” and it makes some intuitive sense. People are receiving the immunity benefits of two different types of vaccines.

“I think I did the right thing to make sure I am as protected as possible from the Delta variant and thus am protecting others who only have one shot,” Rasmussen wrote in June. “Sometimes public health requires making tough decisions without a complete data set to support it.”

Dr. Leana Wen of George Washington University told us: “I feel strongly that the federal government needs to allow boosters for J.&J. recipients.”

During a podcast interview this summer, Dr. Rochelle Walensky, the director of the C.D.C., declined to discourage J.&J. recipients from seeking out a Moderna or Pfizer shot. She said there was not enough data to be sure about the benefits and risks. But when Andy Slavitt, the podcast host and a former Biden adviser, asked her whether she would describe it as a “huge mistake,” Walensky replied, “Not with what I’ve seen so far.”

From the head of a notoriously cautious agency, that was a remarkable and telling statement.

But can you get a booster shot?

That’s a tricky question. Even if you want a follow-up shot, the U.S. government has not approved one, and doctors have generally said no to patients who have asked.

Many people are understandably frustrated by the situation: Some experts are urging a follow-up shot, pointing to the scientific evidence. And some doctors have figured out how to get a second shot for themselves.

Yet if you walk into a doctor’s office and ask for one, you will probably be turned down. It can feel as though there is one set of rules for people with medical connections and another set for everyone else.

What to do? If you want a follow-up shot, you have a couple of options. You can try different drugstores or clinics, hoping to find one that is willing to give a Pfizer or Moderna shot to a J.&J. recipient — or one that won’t ask questions about your history. Or you can choose to be less than fully honest. You won’t be alone.

As Allison, a reader in New Hampshire, wrote to us: “I got J.&J. Do I pretend I didn’t and get Pfizer or Moderna also?”

Here’s the brief case for getting a Pfizer or Moderna shot as a follow-up to a J.&J. shot: The available evidence suggests you will benefit. There are no signs of worrisome side effects so far. And the Delta variant is an even bigger threat to human life than earlier versions of the coronavirus. By waiting, you may be allowing bureaucratic caution to get in the way of your own health.

Here’s the brief case against a follow-up shot: A single shot of the J.&J. vaccine still provides good protection, and the government may soon allow a second J.&J. shot. There is not yet rigorous data on the benefits and risks of the mix-and-match approach with J.&J. And you may need to resort to some deviousness to get another shot.

We understand why so many people are flummoxed.

The Media Equation: Why our monsters talk to Michael Wolff.

The Projectionist: There’s always been more to Kirsten Dunst.

Advice from Wirecutter: These products are better once you break them in.

Quiz time: The average score on our news quiz was 6.7. See if you can do better.

Lives Lived: Mick Tingelhoff wasn’t chosen in the N.F.L. draft. But he was signed by the Minnesota Vikings and played for them for 17 seasons, earning a spot in the Hall of Fame. He died at 81.

The Met Gala, the exclusive black-tie extravaganza known as the Oscars of the East Coast, is back tonight. The gala is a major fashion event, and it kicks off a blockbuster exhibition at the museum’s Costume Institute, which this year focuses on American fashion.

Another unofficial theme, Vanessa Friedman writes in The Times, is youth. Many of the designers are young, as are the hosts: the inaugural poet Amanda Gorman, the actor Timothée Chalamet, the tennis champion Naomi Osaka and the pop star Billie Eilish.

For more on who gets to go, what they might wear and how to watch the red carpet, read Vanessa’s explainer. — Sanam Yar, a Morning writer